As always: my answers her are my personal opinion, are not canon in any way, and may contradict canon sources. These are my thoughts and how I run my personal campaign, nothing more.

If you have a question you’d like to ask or a topic for a post, please leave it on this thread. There’s been some great questions so far, though I’m afraid many of them will require a full post to address. However, a few only require short answers. So today I’ve put together a list of those and we’re going to zip through them, starting with a question I know has been on your mind…

In which regions are tribex found?

If you’re saying “What’s a tribex,” I’m sure you’re not alone. Here’s a picture (from Eberron concept artist Steve Prescott – check out his website here). 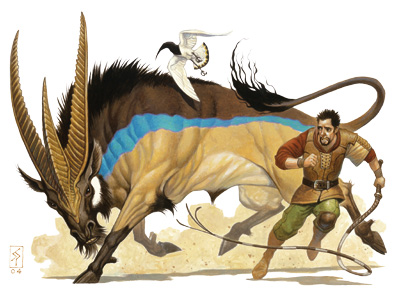 IIRC, canon sources have only mentioned tribex in the Talenta Plains. We’ve generally described tribex as being part of Talenta cuisine. However, I personally consider tribex to have relatives found in a range of environments, and potentially as varied as moose, elk, and deer. The Fading Dream has a fey knight wearing a helmet shaped like the “head of a woodland tribex,” found in what used to be Cyre; I’d also imagine a wooly variant of the tribex in themountains of the Mror Holds. All forms of tribex would share a few key features: triple horns, bony headplate, lion-like tail.

I know most of you are here for the tribex, but I figured I should include a few more obscure questions as well. So…

What’s going to happen to Eberron in D&D Next?

Right now, you guess is as good as mine! Eberron is the property of Wizards of the Coast, it’s up to them to decide what form future support will take. All I can say for certain is that I’m signed on to write Eye on Eberron articles until the end of the year, and that Marsheila Rockwell’s Skein of Shadows comes out in July. Will Eberron get print support in the next edition? Will Eye on Eberron be renewed for 2013? At this point, I don’t know.

If you’d like to see more support for Eberron in the future, the best thing to do is to talk about it. Given that it hasn’t had many releases recently, there’s few ways for the people at WotC to just the current level of interest in the world. If there’s a clear burst of interest, well, it can’t hurt. Ask questions here! Join the Eberron discussion group on G+! Vote for Eberron in this WotC forum poll! I can’t promise that any of these things will make a difference, but they can’t hurt.

Also, is there any way to still get a hold of the Dolurrh’s Dawn charity adventure? I missed it and would be willing to purchase it/donate if need be.

I’m afraid I’m not authorized to give it away or post it here. However, if you post on messageboards you might be able to find someone who did purchase it and get it from them. There’s no DRM, and given that it’s not for sale it’s not like you’re hurting anyone.

There’s been a ‘Group of Eleven’ mentioned several times in regards to Xen’drik and giant civilization during their golden age, but nothing besides that: a mention. So, I was wondering, who exactly were they? What were they all about?

Initially we referred to “the giants” as if they were a monolithic entity. However, Xen’drik is vast and I saw no logical reason that you wouldn’t have multiple giant cultures, so when I was working on The Shattered Land and Secrets of Xen’drik, I sketched out a few in my head. The Sulat League were experts in elemental binding, and they produced the fire giants and the drow. The giants of the Cul’sir Empire chose to unite under their titan emperor and became the single largest civilization in Xen’drik. The Group of Eleven was an alliance of eleven smaller city states, each led by a powerful mage. While their alliance made them powerful, I saw them as far more culturally diverse than the Cul’sir, with a culture that promoted internal and external competition; where the Cul’sir believed a peaceful society allowed research to foster, the Group of Eleven maintained that competition drove evolution.

With that said, the name actually came from a night when a large group of us were trying to get a table for dinner. The phrase “group of eleven” kept getting tossed around, and I liked the sound of it.

What’s the craziest explanation for the Mourning you’ve used in a campaign?

I’ve never explained the Mourning in a campaign. For me, the Mourning is the key to maintaining the cold war. Once its answer is known, people know if it can happen again and if its power can be harnessed. If it can’t happen again, there are people ready to reignite the Last War. If it can be harnessed, it will drive a massive race to do so, as unilateral control of such a weapon would make war irrelevant. If the adventurers in my campaign ever found out the cause of the Mourning, the biggest challenge facing them would be to cover it up before anyone else found out and keep it secret.

Now, it has come up in my novels. In The Gates of Night Lei’s parents suggest that they know WHO is behind it; given that the book has been around for over 5 years and it’s not a major plot point, I’ll give you the SPOILER that they are talking about the Traveler, because they are part of the Traveler’s Cannith cult. They aren’t speaking literally; rather, the point is that whoever or whatever triggered it, it’s the hand of the Traveler on Eberron, and it will drive chaos, change, and evolution. Meanwhile The Fading Dream presents a more concrete theory. I won’t spoil this one, and I’ll simply say that it’s possible it’s the real answer… or not.

Since none of that provides a crazy theory, I’ll throw one out: Clearly, the Mourning was caused by the Spellplague, which was so powerful it punched a whole through realities. Consider the similarities between spellscars and dragonmarks, the plague-lands and the Mournland. Now, this may seem unlikely because a) the Spellplague was introduced in 4E and the Mourning has been around longer than that and b) despite any similarities between spellscars and dragonmarks, dragonmarks existed long before the Mourning. But this is INTERDIMENSIONAL MAGIC. It cannot be so easily explained! THE MOURNING IS THE SPELLPLAGUE!

If I was to encounter a spelljammer type junkyard (think Watto’s from Phantom Menace), where on Eberron would that be most likely?

The key word here is “junkyard.” If I introduced Spelljammer into Eberron, I’d probably riff off the cold war space race and the colonization of the Americas. Each nation is creating its own spelljammers, looking for an edge and competing in the spheres. And what about those rumors about Riedran spelljammers powered by the dreaming crew? Does your team of adventurers have the right stuff to explore what lies beyond?

However, if I was just dropping a spelljammer junkyard into the world as it stands, I’d put it in Xen’drik and say that some nation of giants – the Group of Eleven, for example – experiemented with spelljamming and either gave up or it was lost when the dragons laid waste to the continent. This adds the fun factor that these spelljammers would be giant-sized! Can you get the Titanic into working shape?

Another option would be to say that Cannith or the Zil explored spelljamming a century ago and gave up when the Last War began. The scrapyard holds half-finished hulls and other abandoned tools. Such a location could be anywhere in Khorvaire… though if Cannith is the source, another possibility would be to choose a Cannith forgehold in the Mournland, which would explain the program’s demise.

Do you do any special “plane-mapping” in your campaigns if you run D&D 4E? I find the Shadowfell, Feywild etc. to be mildly confusing compared to the Eberron cosmology. So I guess the question is, what’s your cosmology mapping for 4E?

Honestly? I just use the same planar set-up I always have. When something comes up that requires me to use one of the new planar concepts (IE, Feywild), I come up with something that makes sense. Covering the major ones…

I consider The Feywild to be another name for Thelanis.

The Shadowfell can be either Mabar or Dolurrh, depending on the context. Mabar is the source of negative energy and most undead; Dolurrh is where spirits linger after death.

While the idea of mapping some planes to the Elemental Chaos and others to the Astral Sea works fine, I generally don’t bother to think of it that way in my mind. I still use the orrery design, and I’m happy with it. And I’ll point out that per the recent Eye on Eberron article, Baator is more of a demiplane – so we’re back to the original planes of the orrery.

As always, please discuss your own ideas, experiences, or further questions tied to these topics below!