Last week I posted my first Imperial Dispatch article, delving more deeply into the world of Phoenix: Dawn Command. While I can’t create new material for Eberron, I want to look at what the Fens have to offer if you’re running an Eberron campaign. 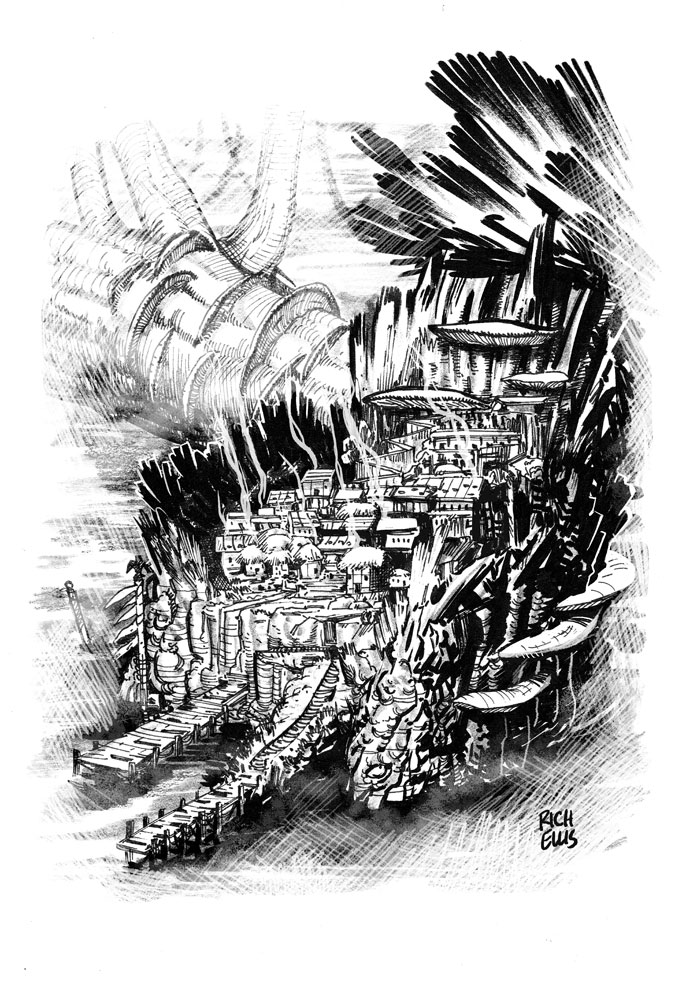 The Fens are a region of deep swamp. The exist on the fringes of Ilona, one of the most civilized regions of the world; while they have cultural ties to Ilona, they are generally thought to be backwards. There are two distinct subcultures within the Fens; the Myrai seek to live in harmony with nature, while the Barochai see the natural world as something to be brought to heel and exploited. The noble families of both subcultures derived power from their House Gods, powerful spirits that took mortal avatars within their houses; many lesser families had bond beasts, animals serving as hosts for spirits. Both types of spirits were banished centuries ago when the first Phoenixes came to power, but their cultural influence remains. Meanwhile, in the present day dark powers are at work. Restless dead rise in the shadows. Corrupted bond-spirits merge with beasts and produce twisted monstrosities. And new creatures never seen before are appearing, as if the world itself is trying to make something that can survive the Dread. The greatest city of the southern Fens has been lost, and the Myrai people of the south seek shelter in the Barochai communities.

The Shadow Marches are the simplest match in Eberron. They too are a swampy region whose inhabitants are often considered backward; a region with two distinct traditions rooted in a past conflict, where cults still cling to those ancient traditions. For purposes of this conversion, I’m going to match the Myrai to tribal orcs that generally adhere to the traditions of the Gatekeepers, while the Barochai are a closer match to the blended clans – and especially to House Tharashk itself, as the Barochai are focused on industry and wringing a profit from nature. So I’ll be referring the Myrai as “the tribes” and Barochai as “the clans.”

We’ve never delved too deeply into the environment of the Marches, beyond “swamp.” As such, you could easily incorporate the most distinct physical feature of the Fens into the Shadow Marches. These are the Titans: trees which once grew up to a mile in height, but which were struck down in some ancient cataclysm. Their wood is infused with magic that prevents decay. So although the trees are long dead, but they form the physical foundation of the swamps. If you embrace this idea, the clans and House Tharashk carve their cities into the stumps and trunks of the Titans, while the tribes generally live atop them or make use of natural cracks and crevasses in the surface of a Titan. Both groups harvest lumber from the Titans, though the tribes approach this in a more industrial manner; this process is more akin to quarrying stone than the work of the traditional lumberjack. In d20 terms, the wood of a Titan would generally be considered to be Densewood, with veins which if harvested and treated properly can yield Bronzewood (both materials described on page 120 of the 3.5 Eberron Campaign Setting). In canon Eberron these rare woods come from the forests of Aerenal, but it’s not particularly unbalancing to give these resources to the Shadow Marches… and it justifies Gatekeepers having ancient bronzewood weapons and armor dating back to the Xoriat incursion. While you could make this one of House Tharashk’s industries, I’d be inclined to have Tharashk keep its focus on finding rarer things. Densewood-grade lumber could be an industry that the clans focused on before the rise of Tharashk, while Tharashk uses the Mark of Finding to locate the rarer veins of Bronzewood.

Aside from creating an additional industry for the Marches, this has a few effects.

So to begin with, blending the Fens with the Marches adds an interesting physical element to the Marches in the form of the Titans. The city of Baroch is a fortress carved into the trunk of a Titan. You could use this concept to reimagine Zarash’ak, Tharashk’s capital city; or you could imagine Zarash’ak as a city suspended between a number of Titan stumps.

The Fens are defined by their relationship to the House Gods and bond beasts. While these things don’t exist in Eberron, some of the ideas are still relevant. The Myrai have some easy overlap with those who follow the Gatekeeper traditions… while the Cults of the Dragon Below could pick up the idea of the cults of Zaria or Taeloch. Bear in mind that there’s nothing saying that the members of a Cult of the Dragon Below couldn’t be vigilantes who are actually fighting evil people; it’s simply that they’re doing so because they believe a divine force is telling them to act. The Cults aren’t always evil; they’re just crazy. Meanwhile, you could explore the concept of bond beasts in Eberron. This could easily be a tribal tradition involving animals awakened by Gatekeeper druids; having each major tribal family have its own talking beast could add interesting culture for PCs who leave the cities and deal with the tribes.

With all that said, the Fens are shaped by their current troubles. This is tied to The Dread, the supernatural threat that is the foundation of the story of Phoenix: Dawn Command: a pervasive wave of terrors manifesting across the known world, with no clear rhyme or reason. if you wanted to explore this in the Marches, here’s some easy ways to adapt the threats of Phoenix.

The current situation in the Fens is driven by the mysterious loss of the great city of Myrn and by the idea that the Myrai are being driven north into the Barochai communities, which is causing overcrowding and tension. If you want to explore this idea, the concept would be that a surge in the appearance of undead and aberrations are driving the tribes to seek shelter in the clan communities. While Tharashk has some roots in the tribes and would likely show some sympathy for their plight, most of the clans consider the tribes to be willfully backwards and wouldn’t be happy with this surge of refugees, especially if people are worried about this rising supernatural threat. And what exactly is causing it? It is a resurgent Daelkyr, which is likely what the Gatekeepers would assume? Or could it be an Overlord rising — a twist that the aberration-focused Gatekeepers might not be prepared for? Either way, this could make an interesting saga for the PCs, especially if one of the PCs has roots in the region; cant they figure out what is behind this rising power before the Shadow Marches are consumed by darkness?

Would the Titans be naturally occurring behemoths in the Marches, or would their growth be the result of Manifest Zones from ages past?

In Phoenix the idea is that the Titans are organic relics of the Old Kingdoms, and were brought down in the cataclysm that ended those civilizations. In Eberron, I’d mirror this with the story that the Titans were created by Eberron herself when the world was first formed and were brought down during the apocalyptic battles of the Age of Demons. Perhaps it’s literally true, or perhaps the first Titans were the product of a particularly powerful coterminous period/manifest zone interaction with Lamannia… or the work of an Overlord or similar benevolent spirit in the first age of the world. But to me, the idea of the Titans is that all that is left are their corpses. If you were to add them to the Towering Woods, I’d still consider the idea that those are smaller cousins, maybe a thousand feet in height – still huge, but leaving the idea of the Titans as something truly primordial.

Do you have any ideas beyond serpents and alligators (crocodiles?) that could be used as bond animals for a particular tribe? Or any animals added to the gleaner list for the Shadow Marches region?

Wolves, deer, raccoons, bears, beavers, muskrats, and various sorts of birds can all be found in swamps, and you can easily adapt such creatures to a fantasy environment (start with crayfish, end with a chuul) and that’s not including creatures that humanity could have brought over from Sarlona. In the Fens I’ve added the idea of the Fen-Cat, and the idea that humanity brought various sorts of dogs into the Fens with them. But there’s a fairly wide range of swamplife to choose from.

There really isn’t a physical border between Droaam and the Shadow Marches. Presumably the Daughters have their reasons for not invading, but I doubt the people of the Marches know what those reasons are. Have any arrangements been made between both nations?

There’s a number of factors here.

The critical point: What does Droaam have to gain from conquering the Shadow Marches? They’d get control of its resources, but in the process they’d shatter their ties with Tharashk and make an enemy of the Twelve, which would severely curtail any possibility of peaceful expansion of power into the Five Nations. As a side note, the Marcher orcs were never conquered by the Dhakaani Empire because the Marches had nothing that would make the difficulty of the conquest and occupation worth the trouble of doing it.

Are there still Daelkyr ruins in the Shadow Marches? What does Daelkyr architecture look like?

When the Daelkyr first came to Eberron, they established themselves in Khyber. No one knows exactly when they arrived, for they certainly spent a period of time capturing and altering local creatures to create their armies before unleashing those forces on Dhakaan. But from the start, they struck from the depths. One reason they were easily sealed in Khyber is that for the most part they were already there; the Gatekeepers simply bound them in the depths.

So the Daelkyr didn’t build cities on the surface; where they had strongholds above ground, they were existing structures that they captured. As far as “ruins” go, these would generally appear to be ruins from the original culture, and the differences would be things you’d only spot on closer examination (and largely relate to what unpleasant creatures or magical effects might linger in such places, as opposed to physical architecture).

As for what Daelkyr structures in Khyber look like, they are like the Daelkyr themselves: deeply alien and often inexplicable. In my opinion, they would also be extremely unique; there’s no one Daelkyr style. The halls of Dyrrn the Corruptor might have the biomechanical look of HR Giger. Belashyrra’s citadel could be a massive gibbering creature — a living fortress, every surface festooned with eyes. Orlaask’s fortress is inside a massive gargoyle that wanders the depths of Khyber. Whatever the appearance, the design should feel illogical. You might have a spiral corridor that corkscrews into a dead end, stalactite-like structures that project from the walls for no apparent reason, pools of luminescent liquid scattered around. These things may all have practical value – but if so, it shouldn’t be immediately clear to the human observer.

Almost nobody knows of the Daelkyr invasion. Is that right?

The Xoriat incursion predates human arrival on Khorvaire by thousands of years, and as noted above didn’t leave a lot of obvious physical remnants on the surface (aside from fallen Dhakaani cities). When humans arrived, most assumed that the Goblin civilization had collapsed in civil war, which was partially true; others assumed that the Dhakaani ruins were obviously too advanced to be associated with goblins, and were the work of some other advanced race. In the present day, the people of the Shadow Marches are familiar with stories of the Daelkyr and the ancient incursion, and scholars across Khorvaire are familiar with the theory, but most of the people of the Five Nations know nothing about it.

If you have questions or ideas, post them below!

12 thoughts on “Dragonmarks: Fens and Marches”