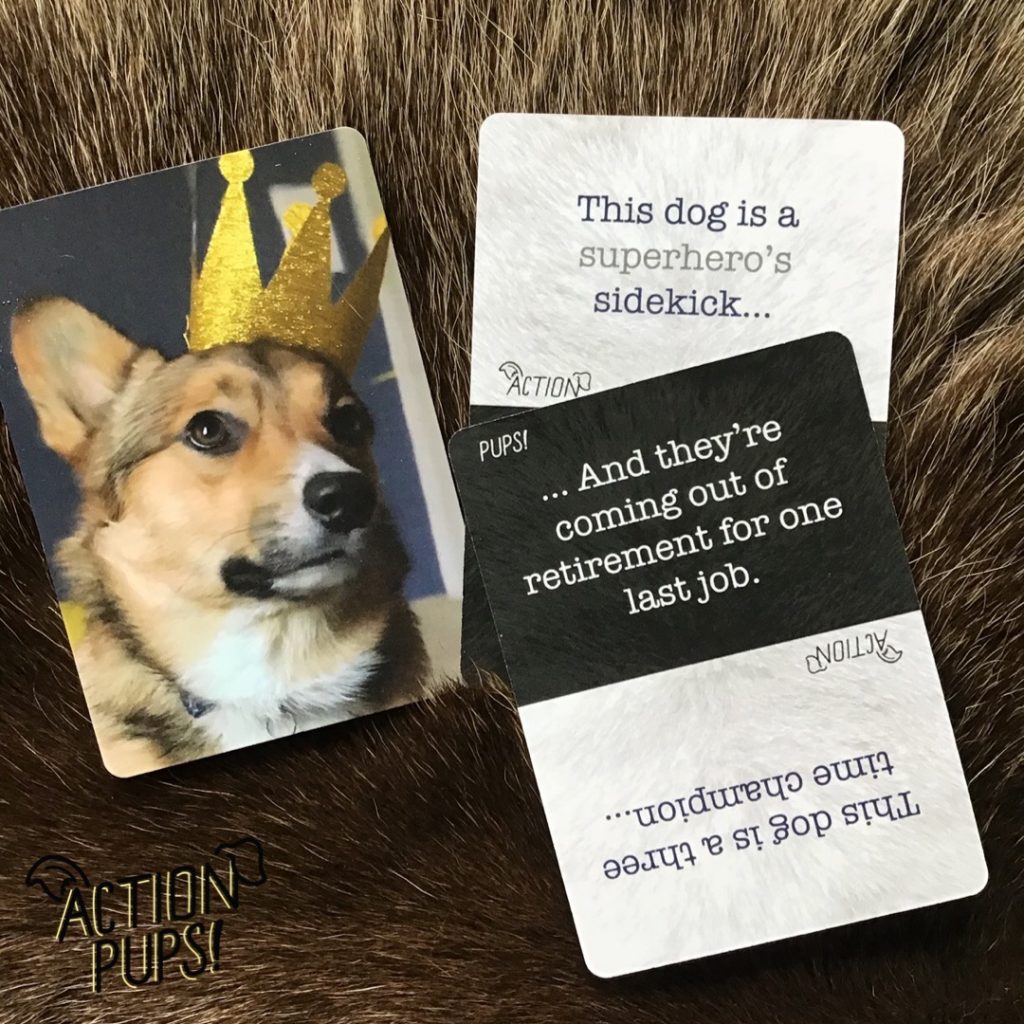 We’re in the final two days of my latest Kickstarter and I’m still looking for some good dogs. But what IS this game? What it all about? What do I love about it?

In 2017 I made a game called Action Cats! as a labor of love. I never intended to release it; I just wanted to make a game with pictures of my friends’ cats. The structure is simple: the judge presents a picture of the cat and gives that cat a name. Everyone else combines two cards in their hand to create a sentence, and then tells that story. This is a critical point. You don’t just hand the cards in; you present the story, expanding and adding as much detail as you want. It was a simple side project, but once I started playing it with people, I discovered that it was a lot of fun. Collaborative storytelling is one of my favorite activities, and it’s the best part of Gloom. But… we’re living in very gloomy times, and as much as I love Gloom, it’s fun to have an excuse to tell HAPPY stories for a change.

We released Action Cats early in 2018. The next day, I woke up to find my pug staring at me as if to say “Dude, where’s MY game?” Scientific studies have determined that he’s 104.2% as cute as our cats (full disclosure, these are pug-funded studies), and we know a lot of other people with adorable dogs. So Action Pups! seems like the next logical step.

At a quick glance, Action Pups! looks like a lot of games you’ve likely already played. There’s a judge. People combine cards to make an answer. The judge makes a choice. It is a common design, and that’s a good thing about it; it’s a game I can play with any member of my family, and I can teach you how to play in 15 seconds. But the actual experience of playing it is quite different from, say, Apples 2 Apples. Let’s consider a round. 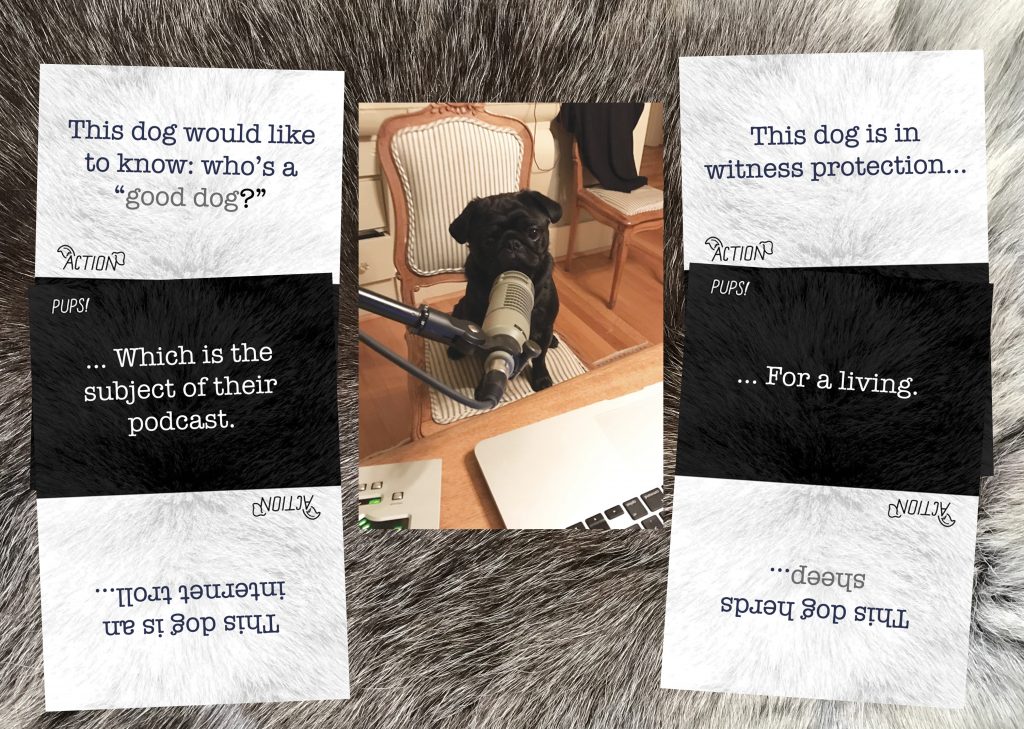 The judge sets a dog in the middle of the table and introduces them… in this case, the judge declares that this dog is Loudmouth Larry.

Each player has a hand of cards. One side of the card has a picture of a dog; the other has two story prompts—the beginning and the end of a sentence. Each player combines two cards to create a story; when everyone is done, they take turns pitching their stories.

Keith: At the end of the day, I think there’s one question we all ask ourselves. Who… think about it… Who’s a good dog? Is it you? Is it YOU? Every week, Loudmouth Larry examines another of the great dogs of popular culture. This week: Snoopy. Cultural icon, sure: but is he a good dog? Tune in to find out!

Jenn: I admit, “Who’s A Good Boy” is a compelling podcast. But Loudmouth Larry’s personal story is far more interesting. You may not have thought about this, but when people go into witness protection, they can’t take their dogs with them; it’s a dead giveaway for someone searching for them. Loudmouth Larry is a professional surrogate dog, providing people on the lam with temporary canine companionship until they can return to their own lives. His podcasting is the one thing that provides continuity in this nomadic life.

Now, if you’re not feeling inspired, you can just read the text straight off the card. But like Gloom, what I love about the game is using the card text as a starting point for a more interesting story. If the dog is a superhero’s sidekick, who’s that hero? Does the dog have a super power and a secret identity, and if so, what are they? If they have a podcast, what’s its name? Who sponsors it?

One of the things I enjoy about this is that it adds variety. There’s over 28,000 possible card combinations. But someone can play the same combination of cards three games in a row and come up with a different take on it each time. This is further enhanced by the use of gray text. In the example about, the card says ‘This dog would like to know: who’s a “good dog?”‘ The fact that good dog is in gray means that you can change it when you present the story. So Loudmouth Larry wants to know who’s a SOMETHING. He might want to know “who’s a cat in disguise?” or “who’s addicted to podcasts?”

Ultimately, the goal of Action Pups! is to encourage people to tell stories… to give you a reason to think about what your pup’s podcast might be, or how this dog is going to save the world. It’s family friendly, and some of the best games I’ve played have been with three generations at the table. It’s not a game about winning; but it’s a fun tool to get people telling stories. And, of course, it’s a chance to…

Get Your Dog In The Game

Action Pups! will include 170 dogs. But we don’t just want any dogs in the game; we want YOUR dogs. Anyone who backs the game can submit pictures of their dogs, and our favorites will be in the game. In submitting pictures, there’s a few things we’re looking for.

That’s all there is to it. But there’s not much time left! If you think your dog is an action pup, back the Kickstarter campaign before it comes to a close!