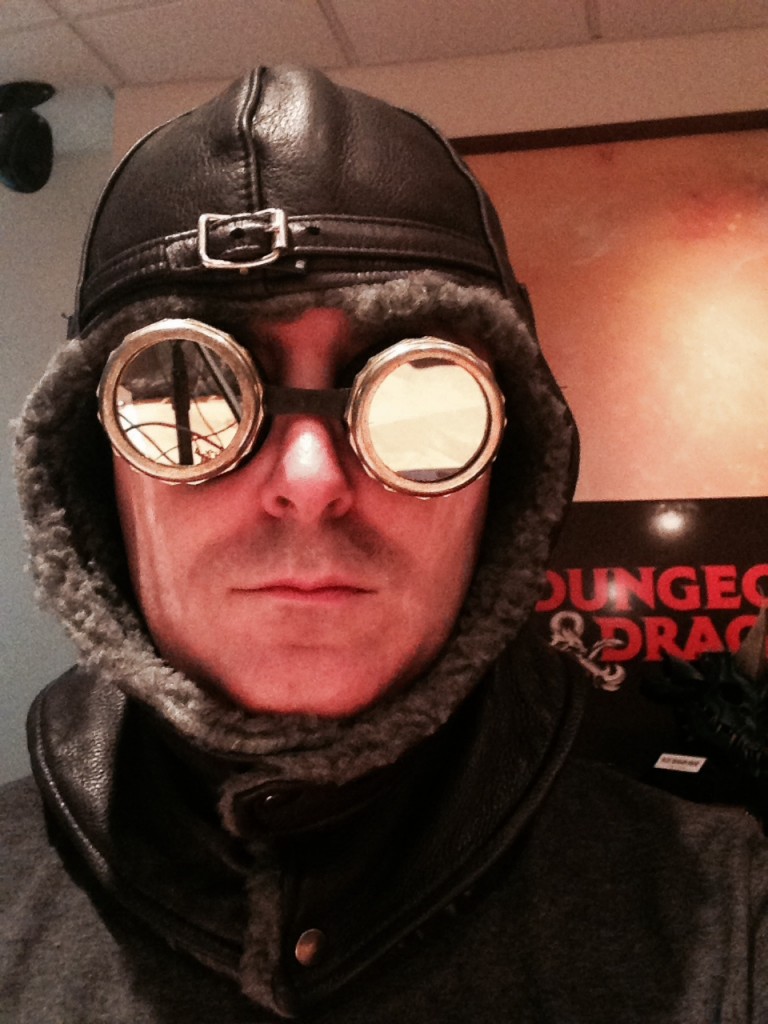 Last Saturday I ventured to the distant lands of Seattle and Faerun to play in the first eight hours of the D&D Team’s Extra Life campaign. Thanks to the amazing donations from all of you, I was able to play Smith, a warforged artificer. Of course, 5E doesn’t have warforged or artificers, so the first step was putting something together as a placeholder. You can find my temporary stats for the Warforged and the Artificer at these links. Other donations established details about my character, and going into the adventure I had a whole backstory planned out. So let me take a moment to tell you about my character.

History: Smith knows nothing about his history. The first thing he remembers is a vision of the Silver Flame urging him to protect the innocent. He awoke in the Mournland, with the symbol of the Silver Flame burning on his forehead.. In the ruins of Making he found the docent Smee (Subject Matter Expert), who helped Smith harness his latent talent for artificing. Many questions remain unanswered. Did the Silver Flame shield him from the Mourning, or was it the Mourning that allowed it to touch him? Was he designed to be an artificer, or was it another side effect of the Mourning?

The Mourning definitely had an impact on Smith’s consciousness; he is an eccentric individual and not very good at social interactions. He spent the last two years living in the streets of Sharn, doing his best to help people with his makeshift creations. He and Smee were investigating a dimensional breach that seemed to be tied to an Overlord, specifically Tiamat; it seemed like she might be trying to escape her bonds by slipping sideways through reality. Smith was pulled through the rift into Faerun, and is determined to stop Tiamat. The transfer has further damaged his memory, so his level has dropped; he’s trying to remember his full capabilities. In the meantime, he tries to acclimatize himself to the world by mimicking the behaviors of others around him.

PERSONALITY TRAITS: I am tolerant of other faiths and respect the worship of other gods. The Silver Flame is not a god as others think of gods. It is a force created by sacrifice that empowers mortals to defend the innocent. It doesn’t preclude the existence of other deities, and I appreciate anything that gives people hope.

IDEALS: I will be a vessel of the Silver Flame. I believe that the Flame restored me so that I can protect the innocent from supernatural threats. Beyond that, I believe that I serve as (one set of) the eyes of the Flame: I am helping it reach new lands.

BOND: I created a great work for someone, and then found them unworthy to receive it. I’m still looking for someone worthy. This is his mystery widget, which when used will have the effect of a wish.

FLAW: When in Faerun, do as the Faerunans do. Every scene or encounter, I will roll a die to randomly determine which PC I have imprinted upon. I will emulate that PC and very obviously seek their approval, to a degree that would embarrass others.

So, that’s what I had on paper when I arrived in Seattle. I pulled out the goggles because hey, every artificer should have goggles, and I liked the effect of the blank stare. The aviator hat was a last minute addition as I was going out the door; given that warforged don’t have hair, I felt that it worked.

I like Smith’s backstory and attributes, and I was prepared to tackle all these elements. But it’s one thing to come up with a story, and another to put it into practice first thing in the morning with an extremely unusual party. Jeremy Petter was a Dragonborn sorcerer whose spells were randomly determined by drawing a card from a magic deck; whenever he cast a spell, he had no idea whether it would hurt the enemy or us. Tally Heilke was a were-goat monk from the High Elk clan. Liz Smith had a dragonborn paladin who insisted she was a human with a skin condition. And Forest Gibson was a straightforward kleptomaniacal halfling rogue… except for the fact that he was carrying around the head of his father, which mysteriously could still talk. In the second round, we traded out our halfling rogue and dragonborn paladin for a few more exotic characters… Mike Selinker as a gnoblin (gnome/goblin) dessert chef/cleric and Gavin Verhey as a romantic sentient ooze sorcerer who also used Magic cards to determine unpredictable side effects of his spells.

Amidst such a colorful cast, it turned out to be a little hard to focus on all of the aspects of my character. I certainly managed to play to my ideals and I had fun with the battlecries, but I didn’t do as much with the mimicry as I could have, and I only managed to work my masterpiece artifact into things towards the end. It would take too long to go through the entire story, but I’ll call out a few of the highlights…

In the end, we didn’t do much to stop Tiamat, but it was a fantastic time and thanks to all of you we raised over $75,000 for the Children’s Miracle Network. Personally, I think that the whole thing was just a daydream in Smith’s mind as he considered going through the rift, only to stop and tell his companions: “On second thought, let’s not go to Faerun… it is a silly place.”

I’m not ready to put down my dice. On Sunday, November 2nd I will be taking over the DM’s seat for ChariD20 in LA, with such awesome players as David Nett, John Rogers, Javier Grillo-Marxuach, Zak S, Joseph Scrimshaw, and many many more. Anyone who donates at least $10 will get a copy of the adventure. More on that later in the week!

Thanks again to everyone who supported Extra Life. If you watched any of the stream, I hope you had as much fun as I did!