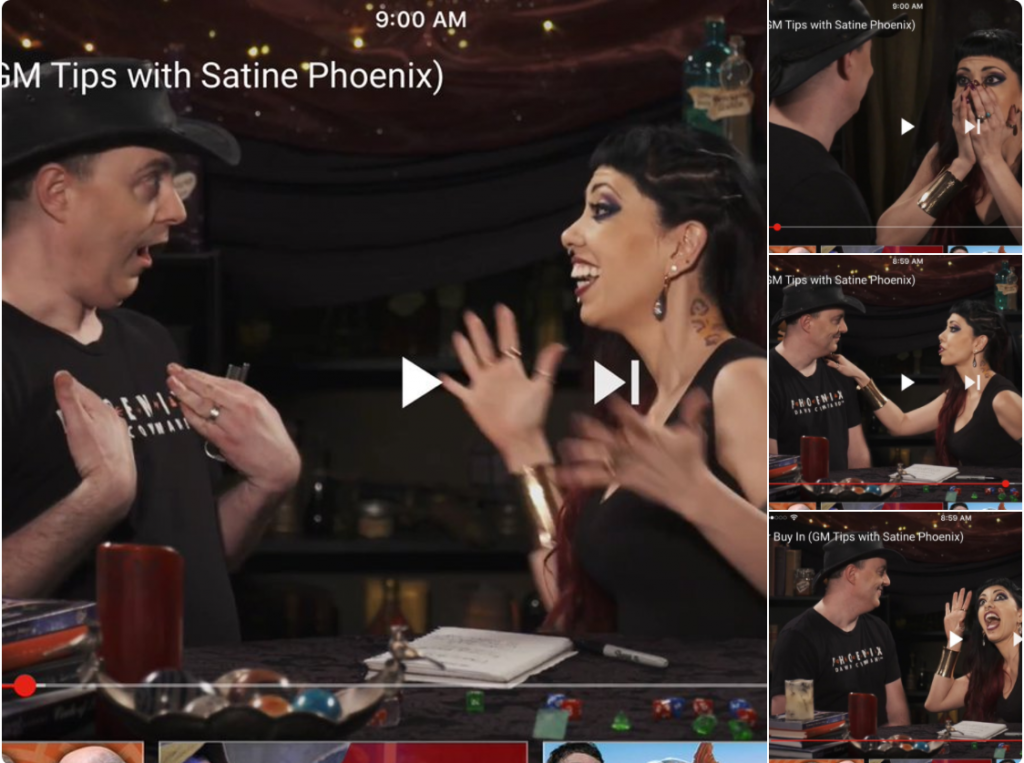 A few weeks ago I had the opportunity to take part in Geek & Sundry’s GM Tips with Satine Phoenix, and my episode was just released today.

Since the episode includes a link to this website, some of you might have followed it and be saying “Who is this guy, anyway?” So I’m going to give the brief Keith rundown, and then I want to review the concepts Satine and I discuss in the episode.

So: I’m Keith Baker. I’ve been a professional game designer for over twenty years, and in that time I’ve worked on tabletop RPGs, board and card games, MMORPG computer games, and LARPs. I’ve written six novels. Most people who’ve heard of me know me as the creator of Eberron, one of the official settings for Dungeons & Dragons. Others are more familiar with my card game Gloom, which uses transparent cards and encourages you to take control of a family and tell a story about their tragic demise. More recently, I’ve founded my own company Twogether Studios and we’ve just released a new RPG, Phoenix: Dawn Command… a fantasy RPG where death is how your character grows stronger. If you’re interested in acquiring Phoenix, you can get it from the Twogether website or from Amazon.

Whether I’m working with RPGs, MMORPGs, or storytelling games such as Gloom, what I most enjoy is the collaborative experience of roleplaying. As the gamemaster I assemble the pieces of the story, but I love the fact that I don’t know how it’s going to end. In 2009 I traveled the world and ran a particular Eberron adventure with fifty-six different groups of gamers… and every time people came up with something I’d never seen before. So that’s a critical part of my approach to GMing: working with the players to create a story that we all enjoy. Phoenix adds another twist: because death isn’t the end of the story, the odds and the stakes can be far higher than in the typical RPG session. I can drop the wing into a village where there’s a zombie outbreak and say you have two hours to contain this: after that, it will have spread too far to be contained, and we’ll lose this region. The odds may be stacked against them, and to contain the infection they’ll have to find ways to beat the odds. It may take heroic sacrifice, with one or more Phoenixes giving their lives to help the rest succeed. They may decide they have to destroy the village to save the region. And it is entirely possible that they may fail, in which case they will have to live with the consequences once they are reborn… and that real possibility of failure makes any victory that much sweeter.

Which brings us to Player Buy-In, the topic of the GM Tips episode. How do you encourage players to invest in the game, to see their characters and the world as more than just stats and numbers?

First of all, if I’m preparing a long-term campaign around a particular concept, I’m going to start by discussing that concept with the players. I may want to do a spy campaign filled with intrigue and diplomacy, but if all the players want pulp adventure and action we’re going to have a problem. If you have a concrete idea – a war story, investigating Lovecraftian horrors, a mystery-oriented gritty crime saga – see what the players think and what they’d like to see in such a campaign. If you don’t have a concrete idea, talk to the players and see what interests them. Is there a particular theme or time period that interests them? A particular arc that sounds interesting? This can also tie to choice of setting or system. Phoenix is an action-oriented war story with elements of horror and investigation… does that sound fun?

Once we agree on the basic concept, my next step is to work with the players on characters. With some campaigns, I’ll get the players to develop the connections between their characters in advance. Generally this is about asking questions. Perhaps they all served together in a war… what role did their character play in the unit? What’s the worst thing character X saw in the war? How did Character Y save their life? Who was the beloved comrade they lost? Or perhaps they’ll all thieves in the same guild. Why did they turn to a life of crime? What was their biggest haul… and how did they lose the money?

While I like having parties of characters with a solid backstory going into a campaign, you can also find ways to tie disparate characters together through the action. This is the approach Phoenix takes. During character creation each player determines their own backstory. Who were they in their first life? How did they die? What are they fighting for now – because they couldn’t return as a Phoenix unless they had something worth fighting for? What are they still afraid of? The story of the setting then places them together into a wing facing horrific dangers, and as I said above, failure is an option; they all have their own reasons for fighting, but they’ll have to work together to succeed.

Looking to a more traditional campaign, there’s the Eberron campaign I discuss in the episode. Here each player made their own character, and I had each of them come up with a reason that character would be going to the frontier city of Stormreach. What are they running from? What do they hope to achieve? The game begins with them on an airship heading across the Thunder Sea. There’s a little time in the common area for them to get to know each other, as strangers on a ship might. Then the ship gets hijacked. The PCs don’t have any attachment to one another… but they’re the only people on the ship with the skills to deal with the hijackers, and there’s nowhere else to go. So they have a reason to work together. Presumably they will succeed… but by the time they get control of the ship, it’s already off course. It hits an airborne manifest zone and the elemental ring goes out.

Now the ship is crashing. None of the players have the skills required to repair an airship; they have a minute to figure out how to survive a crash. And they likely will – but it won’t be pretty. They find themselves marooned in an unknown location, injured, and saddled with other survivors who don’t have their skills… but who still may have vital knowledge or talents that could help them survive. They soon realize they aren’t even on Eberron anymore; the event that caused the ship to crash has marooned them on another plane of existence. Ultimately they can determine that they have six days to find a way back to Eberron before the planar alignment shifts and they’re stuck in Lamannia for years. The next two adventures take place in Lamannia, as they search for the things they need to survive and to find a way home. Again, the characters don’t know each other: but they have an organic reason to work together, because there’s a common goal that none of them want to walk away from. Ultimately they do find a way back to Stormreach. Now they’re finally where they wanted to go, where each of them has something they want to accomplish. But Stormreach is a dangerous place, and all their goals are more than they can accomplish alone. And you know, what about working with those people who got them through Lamannia? Rather than forcing friendship on the PCs from the start, this sort of scenario is a way to build a bond through the action of the game.

It’s possible your players aren’t comfortable coming up with this sort of story. They want to play a dwarf fighter; they don’t really have any ideas beyond that. In this case, you could present them with possible ideas – in the process helping them get a clearer idea of the setting. Here’s an example of a character questionnaire for a warforged soldier in a campaign in which the PCs were soldiers who spent time in a Karrnathi prison camp. 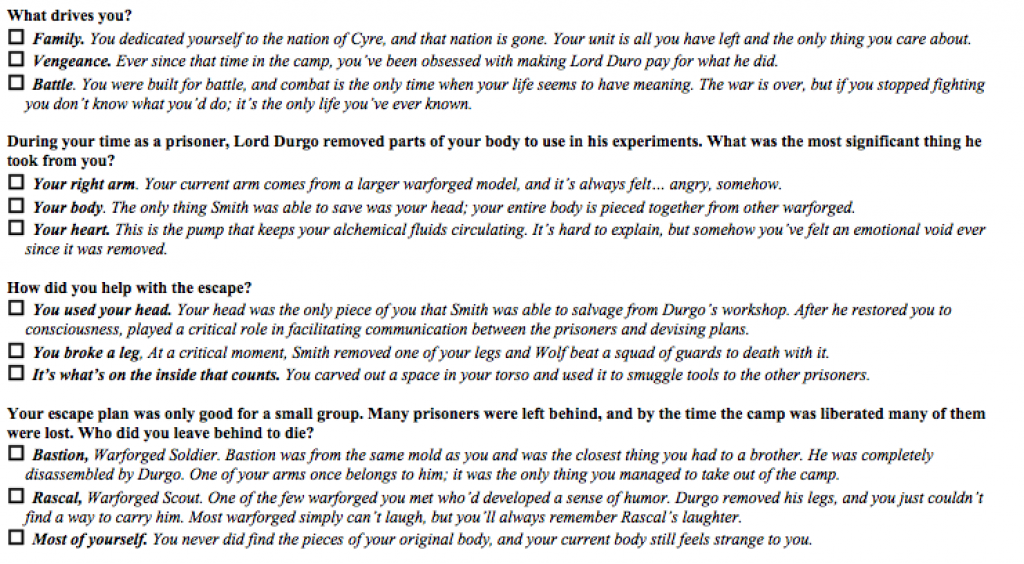 Another issue is that some players may be afraid to develop a background that gives them connections to the world because “The GM will use this against me” — or that they don’t want to have any sort of background element that implies failure. It’s important to make clear that this isn’t a competition. If they don’t want you to “use things against them” you shouldn’t do it; you’re trying to build an experience you’re all going to enjoy. But talk to them about stories or movies they enjoy and their favorite characters. Compelling characters generally aren’t perfect paragons with no connections to the world around them. They’re people who overcome past failings, who fight to protect the things they care about, who learn from mistakes. In the questionnaire above, I don’t give the players the option of having pulled off a perfect escape: someone got left behind, and it’s up to them to decide who. Because that failure gives the story weight. Their character isn’t perfect. The story is real, and bad things can happen… which makes the triumphs they have in the future more meaningful. I may offer them a set of three characters who were left behind, as in the example above, but once they’ve made that choice I’ll ask them to help me add details about that lost friend. What was your favorite joke Rascal told you? The more the player personalizes this NPC, the more it becomes their story, and the more meaningful it will be for them if they have a chance to save Rascal in the future.

I’m going to wrap up with that. But to me, the main point is to work with your players. Building the story together is the best way to ensure that you all care about it. As GM, it’s your job to craft the foundation and providing the driving force of the story. But the more chances you give the players to invest in the story, the more impact it will have and the more investment you’ll have in the long term.

So: what techniques do YOU use to enhance player buy-in?