I’m currently on a boat in the middle of the Bermuda Triangle as part of the JoCo Cruise. Jenn Ellis and I are demoing Phoenix: Dawn Command, and having a lot of fun with that. I’ll be writing much more about Phoenix once I’m back on dry land, but here’s a sneak peek at some of our art, courtesy of Grace Allison and Rich Ellis… 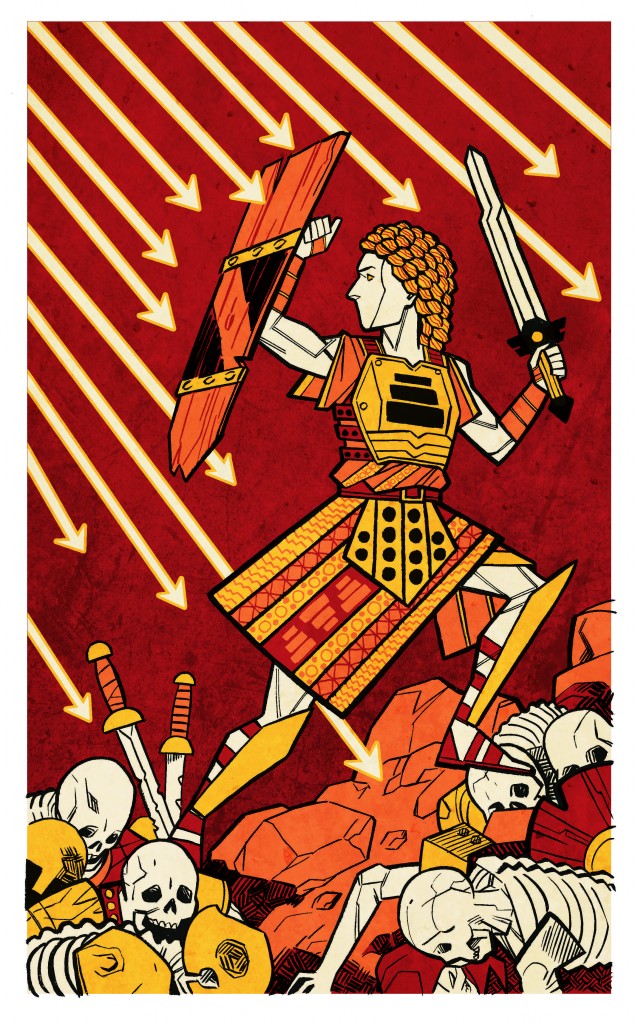 Phoenix aside, there’s a lot of other things going on today… despite being out in the middle of the ocean, I felt that I had to assemble an internet server from twine to get the word out about them. So without further ado…

This week, I’m honored to join a long line of luminaries that artist Len Peralta has featured on his Geek-A-Week series. Geek-A-Week is a podcast with a twist – in addition to discussion, Len produces a trading card of each of his guests. Past guests include Neil Gaiman, Guillermo Del Toro, Molly Lewis and many more. Take a look and a listen here!

Wizards of the Coast has a new online feature sharing various ideas for D&D Fifth Edition, and the first installment deals with Eberron. The article includes possible ways to handle three of Eberron’s unique races, an option for implementing the artificer as a wizard subclass, and a way to implement Dragonmarks. I’m always excited to see any support for Eberron, but as you read the article bear in mind that this is draft material. Quoting the article itself:

These game mechanics are in draft form, usable in your campaign but not fully tempered by playtests and design iterations. They are highly volatile and might be unstable; if you use them, be ready to rule on any issues that come up. They’re written in pencil, not ink.

The upshot of this is that your opinion matters. These aren’t final mechanics – they are ideas. Do you like the artificer as a wizard subclass, or would you prefer to see something that is more closely modeled on the 3.5 artificer? Are you comfortable with warforged “wearing” armor, or would you rather see something like the old adamantine/mithral body feats? Post your thoughts, here or anywhere else, and let people know what you like or dislike; it could make a difference for the next stage in Eberron’s development.

And now I’m going to get back to the serious business of being on a cruise!