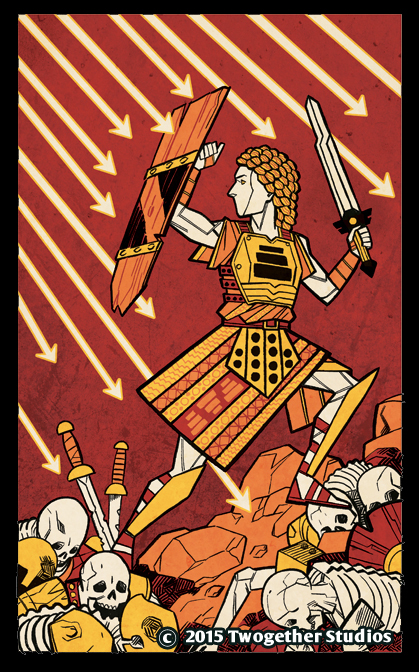 As a Phoenix, death is not the end of your story.

You have passed through death and returned stronger than before. Now you are the last hope of a world besieged by nightmares. To defeat the Dread you will have to unravel ancient mysteries and overcome terrifying threats. You have seven lives to save the world: make each one count.

Phoenix: Dawn Command is a fantasy roleplaying gaming coming out in August 2016. Phoenix’s card-driven system puts the skills and strengths of the character directly into your hands – an intuitive system that’s accessible both to longtime gamers and those who have never played a roleplaying game before. For the GM, the system facilitates collaborative storytelling with a minimal amount of prep time… and the basic game comes with a seven-mission story arc ready to run out of the box.

Daniel Garrison and I began working on Phoenix: Dawn Command almost three years ago. I like to say that it’s a bridge between Eberron and Gloom. Like Eberron, it’s a fantasy setting with an intriguing story to explore. Like Gloom, it’s a card-driven game that encourages storytelling… and in which you eventually want your character to die. It is a world where the stakes are high, where your missions matter, and where victory often requires terrible sacrifice. You have seven lives, and you grow stronger each time you die… but each time you come closer to your final death. Death isn’t the end, but neither is it trivial… and I love the stories that you can build with this foundation.

Phoenix: Dawn Command will be released in August. Over the next few weeks I’ll be writing more about the setting, the rules, and answering any questions that you have. I’ll be doing my first Phoenix Q&A later this week, so if you have questions, post them in the comments or contact me directly. If you’re a Kickstarter backer (at the $45 level or above), you should have already received a link to download a pdf of the sourcebook; if you haven’t, use the contact me button to let me know and we’ll see what we can do.

For now, here’s a few things you might want to check out.

Post your questions about Phoenix: Dawn Command in the comments below!