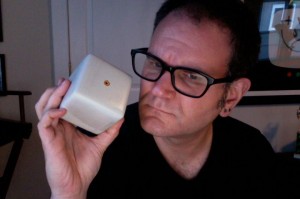 This week I’m talking with JAVIER GRILLO-MARXUACH. Javi is the creator of one of my favorite television shows ever: The Middleman. He also wrote the comic the show was based on, and has done writing for such diverse shows as Lost, Charmed, Medium, The Pretender, and many more. He’s written comics! He’s created short films! He is one of the smartest people in the room, and if you’re not familiar with his work, you should get right on it.

What’s your story? Do you already know how it’s going to end, or are you just making it up as you go and hoping you get renewed for another season?

Though some days it feels like my story is the product of a writers room where lunch has not yet arrived, everyone is snapping at each other in hypoglycemic shock, the ratings arrived wrapped in fish and the dailies have become indelible proof that our once-irresistible-but-now-crotchety, dialogue-rewriting leading man has been spending too much time at the craft services table…those days aside, my story is pleasantly open-ended and I have made my peace with the truth that such uncertainty is far more conducive to fun, surprising opportunities than a relentless drive toward a dramatic conclusion.

You’ve worked on a host of shows and comics, but you’ve also created your own original characters and stories, such as The Middleman and Ramiel: The Wrath of God. What inspires your original work?

Let me answer this question with my favorite anecdote from the set of The Middleman. I was hanging out with our leading lady – Wendy Watson herself – Natalie Morales, and the actor who played her boyfriend Tyler – Brendan Hines. We were shooting the second-to-last episode and I answered a question about Brendan’s character by telling him that “Tyler is me on my best day.” Natalie looked at me in abject shock and horror and exclaimed that “But you said Wendy was also you!” I replied that indeed, she was. Natalie followed that up with the slightly repulsed statement “But… Wendy and Tyler are having sex!” In the difficult and awkward pause that ensued, I realized that there is probably no better way to summarize the relationship of creators and their work.

Tell me about The Middleman. How would you sum it up for a complete newb? What makes it unique?

It’s like having your brain smashed with a slice of lemon wrapped around a large gold brick. No, wait, that was a Pan-Galactic Gargle Blaster. They blend. OK, The Middleman…it’s basically a brightly-colored superhero fantasia where good is rewarded with victory and sustaining friendships, where doing the Right Thing results not in burden, compromise and tragedy, but in knowledge, wisdom and renewed optimism, and in which evil is not an unstoppable force without end, but the simple consequence of a lunk-headed refusal to behave with what we shamelessly earnest sentimentalists refer to as “simple human decency.” Those of us who made the show, quite simply, went to work every day with the humble goal of creating a televisual version of the Platonic Ideal of the Fisher Price garage we all had as children: an endlessly playful structure full of bright and shining things all leading to a good time. Whether we succeeded is up to you – the viewer – to decide.

The Middleman can always be counted on for a colorful exclamation, be it “Mutual of Omaha!” or “Eyes without a face!” What’s your favorite Middle-expression, and what was your criteria for coming up with them?

Because The Middleman transformed himself from a snot-punchin’ hellion into a clean-livin’ man who renounced profanity, the scripts continually called for more – and more colorful – expressions to articulate what ordinary people would normally do with an expletive. To fill that need, we had a dedicated white board in the writer’s room for Middleman exclamations (coming up with them became such a pervasive obsession that, to this day, the writers will email me new ones on a regular basis, even though the show has been off the air for some four years). You know, it’s hard to have a bad day at work when every time you turn your head in a certain direction, you see a board full of bon-mots like: Abs of Steel! Band of Brothers! Lhasa Apso! Land of the lost! Abe Lincoln’s mule! Breakfast of champions! Misfits of science! Easy-bake oven! Gods and monsters! Corinthian leather! Non-dairy creamer! Star 69! Door number three! My little pony! – and, of course – In-a-gadda-da-vida! As for my favorite Middle-exclamation, I have to say that while most recently, I truly enjoyed having the Big Green Cheese exclaim “Sons of Anarchy!” (in my traditional Christmas card Middleman short story that I do for the fans), I prefer the sheer elegance of simplicity to be found in heaving out a good, loud “OH PHOOEY!”

We met at a D&D game. How did you get into gaming, and what do you enjoy about it?

Dungeons and Dragons is like geek Esperanto: a shared language for people who love living out loud in a realm of imagination. I got into it when I was ten and the first edition came out…and it was like nerd-nirvana for me and my friends (that and VCRs and the Atari 2600). I love the social aspect of role-play gaming, the creativity, and – of course – the Mountain Dew and pizza. The best way I can describe D&D is how I explained it to the five year-old son of my current Dungeon Master…the little guy asked “what’s D&D?” and I said “you know how you have a video game system? It’s like that, only your dad is the console and the television.”

I am incredibly blessed and lucky in that I get to do for a living something that I love dearly. Someone in my position should never take that for granted, so I plan on doing exactly what I always do, make things and hope they get out to anyone who might enjoy them: I have a new comic series “Unfathomable” coming out in the summer through APE Entertainment (the best way I can describe the premise is “Transformers with fish”)…I am also creating a pilot for the SyFy channel and doing some work on a new series created by Naren Shankar of “Star Trek: The Next Generation” – with whom I worked on seaQuest – and Luc Besson, who directed “The Fifth Element” among many others. Truly, all I want is to continue to have the privilege and opportunity to put these weird little objects from my mind into the world and see if they survive!