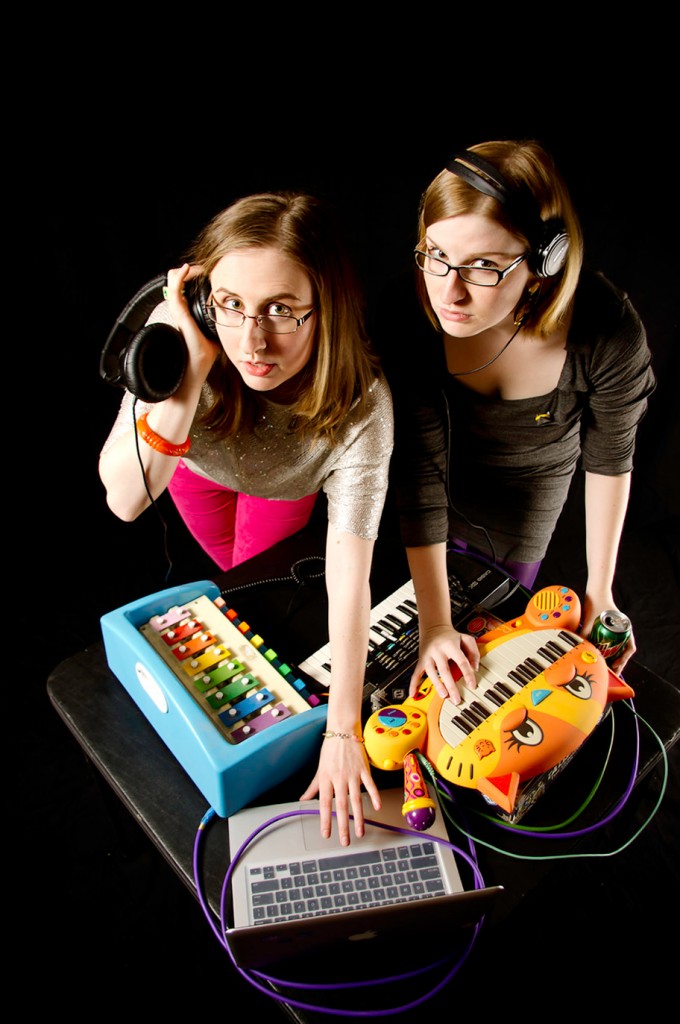 My guests today are THE DOUBLECLICKS, Portland’s hottest comedy/nerd/folk sister band. In their own words, they “write songs about Dungeons & Dragons, beatboxing, and lots and lots of heartbreak.” You may know them from W00tstock or the Ladies of Ragnarok, or you may not know them at all, in which case you should stream some music right now.

On to the questions!

How did you get started? What drove you to dive into the cutthroat, Smaug-eat-Smaug world of Nerd-Folk music?

Angela: Growing up and through school, my favorite music has always been stuff with lyrics that have something to say – usually something funny – like They Might Be Giants or Jonathan Coulton. I started playing guitar during college, because, despite having a very musical family, it wasn’t until I left home that I realized that playing guitar actually “makes you cool.” Aubrey moved out to Portland toward the end of my college career, and encouraged me to write songs and perform them with her at a local open mic night – and, when it came to songwriting, I immediately jumped to emulate my influences – with songs that are more about lyrics and storytelling than anything else. That was almost 4 years ago now. We officially started the band in 2011, and we’ve had just an amazing time.

Aubrey: Angela started writing songs and playing the guitar for her friends, and I dragged her out to open mics around Portland because I knew other people would be delighted by her performances. Then we started playing little shows for our friends and found a band name, started writing more songs… and have been meeting amazing people ever since!

If you were taken to a zoo on a distant planet and forced to perform three of your songs for the rest of your lives, which three would you choose?

Angela: Oh, how I hope this doesn’t happen. For the first, I’d choose Oh, Mr. Darcy, because it’s a true story that has shaped who I am. For the second, I’d choose Imposter (the song about Mars Curiosity), because it’s also got true sentiments, plus it’s about space, so that might help us gain some sympathy with our alien zoo-keepers. For the third, it seems like I should choose a happy one, but I think I’d choose “A Song about EVE Online,” because it’s hard to play, and if we had to perform the same songs for the rest of our lives, we might as well be improving.

Is “This Fantasy World” based on a true story? How did you get started with gaming, and what are some of your favorites?

Angela: “This Fantasy World” is about meeting someone in a Dungeons and Dragons game and falling in love. It is, in fact, based on a true story – it’s about the D&D game in college, in which I met my boyfriend. I got started with gaming in high school – my friends and I would play D&D with dice and graph paper in the foyer of our school, while I waited for my mom, who taught at my school, to be finished, so I could go home. My experience, through high school and college, was pretty limited to D&D, occasional tries at Werewolf or Mage, and some board games like Twilight Imperium (I didn’t know any better, ok?). It wasn’t really until we started the band that our worlds were expanded to see awesome indie RPGs like Lady Blackbird and Dungeon World, and fantastic board games – my current favorites being Ticket to Ride and Lords of Waterdeep (I’m a sucker for victory points).

You’ve just released a holiday album, Christmas Ain’t About Me. What makes it different from the average holiday collection?

Angela: Christmas Ain’t About Me is our take on Christmas. There are a couple of songs that are specific to this year’s holiday – about the old man with the white beard who makes the season great (Gandalf), and what happens on December 21 (The End Of The World.) We also took some of the classic Christmas Song Types – the love song, the travel song, and the song from a kid’s perspective – and twisted them to our own experiences. The making of this album was a great experience in getting-something-done-and-out-there-quickly – and we’re very proud of how it turned out.

Aubrey: There are several holiday themes- children, elves, presents, travel, being with friends… but we based it off our personal experiences which makes it a bit nerdier than average.

In honor of your song “Worst Superpower Ever”, I have to ask: Would you rather have Superman’s super-ventriloquism or Batman’s bat-thermal-underwear?

Angela: That is a tough choice – both of those seem *amazing.* I’d probably go with bat-thermal-underwear though, because super-ventriloquism seems like it go horribly wrong more often than not.

Aubrey: I want the thermal underwear! Being warm when it’s freezing outside makes me unstoppable!

This Friday, we are prepping for the apocalypse with a live-streamed bunker concert on Molly Lewis’ YouTube Channel at 7:30 pm PST. If we survive, in 2013, we will hit the road for a West Coast tour through Seattle, Portland and most of California – playing in a lot of game and comic stores. We’re planning to make a new album in the first half of 2013, and then tour all over the place, because touring is awesome.