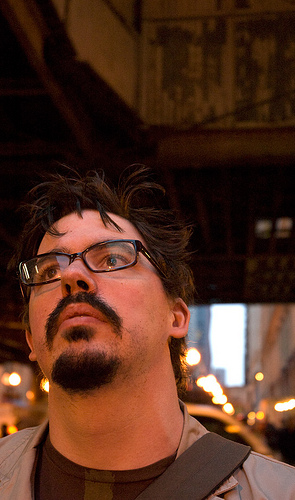 My guest this week is designer WILL HINDMARCH. He does an excellent job of covering his career at his website. In short, he is a writer, gamer designer, and extremely clever person. Over the years we have collaborated on a number of things. We worked together on the Feng Shui sourcebook Friends of the Dragon, which may (absolutely no guarantees) be one of the first places where flashbacks are suggested as an RPG story mechanic. Years later Will invited me to take part in his anthology The Bones: Us and Our Dice. Later still I had a chance to play in his cyberpunk adventure Always/Never/Now, which was one of the most entertaining roleplaying experiences I can recall. This doesn’t begin to touch on the scope of his work… like I said, check his bio. And now, let’s get to the questions!

Who are you? Please answer in exactly five words.

What have you done over the last decade?

Not enough. Since 2002, either on staff or as a freelancer, I’ve put a fingerprint on something like 100+ publications, mostly in the game sector, and it still feels like I’m lagging behind prized contemporaries and luminaries.

In the past decade, I’ve gotten married, moved from city to city a few times, and learned a lot about writing, design, development, and production from some of the gaming hobby’s most-skilled people. I’ve achieved a few long-term goals from my past but I have a lot more still waiting to be realized. I’ve sailed on the surface and I’ve scraped the bottom of the sea, but at least I’m still here, chasing new goals. Advance, setback, pirouette, onward.

The big thing that I’ve done in the past ten years and get to know some of my favorite game designers, writers, and other creative folk in a way that goes beyond fan mail or a handshake. I count myself incredibly lucky for the company I’m allowed to keep. I’m surrounded by intimidating talents and wonderful hearts and cunning minds and while I haven’t yet made the mark (or all the games and books) that I so desperately wanted to make by this point, I am better primed to do those things now than I was before. I remain hopeful, most days.

Tricky, this one. I have created a number of games close to zero. Most of my work has been on other people’s games, expansions, and supplements. Vexing.

Truth is, I am near-sighted when it comes to favorites—my favorite game is often the one that I am obsessed with in the moment, so not only does my favoritism juke and weave, it often doubles back and leads me through the woods to familiar groves after years away. Which is to say, I don’t know. I’ve singled out Castle Falkenstein as an answer to this question a few times, but there have been times when my favorite game was Wraith: The Oblivion, the Saga system (whether it’s powering fantastical or super-heroic roleplaying), and I’m plainly a sucker for the confluence of mechanics that make up Lady Blackbird. I’ve been playing a whole lot of 7 Wonders for the last year or so, too; I admire that game rather a lot.

But my favorite game? It’s probably Thief: The Dark Project. That’s the most engaged and captivated I have ever been in actual play, and I was engaged and captivated something close to my maximum amount by that game. It builds a terrific world, tells a great tale, features wonderful characterization and mechanics, and is probably the most frightening game I have ever played.

If you were trapped on a desert island, what three dice would you take?

Probably 2d6 and 1d10. I can play a whole lot of my favorite RPGs with the sweet curve of 2d6 and the nice simple determination of a single ten-sider. Plus, if I can tally in the sand or make tick-marks on the tree(s), I can track successes and play all manner of great games calling for more dice. The sand will become a record of adventure, grooved all over with the scrap measurements of play, maybe even gridded out with a simple board for tracking coconut goblins and sea-smoothed stones standing in for bold adventurers.

When the sailors finally row up to rescue us, I’ll hold up my finger and be like, “Let’s just finish this round to see if we can save the lost treasure.”

What’s one of your favorite ways to set the mood when you’re running an RPG?

Music. I use a lot of tricks and techniques, from small talk to cadence to lighting, but music is one of my favorites because it’s like getting a whole secondary channel of mood and information into the play space. I can say one thing and let the music support or confound those words and create a situation or atmosphere that much more nuanced than I could do with just words alone. I’ve written a fair bit about this and hope to write more. A lot of what I do with music at the game table is intuitive but I’m eager to externalize it as actionable advice one day.