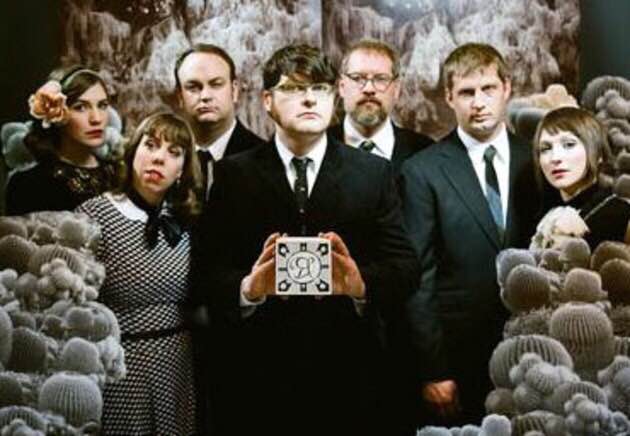 Two days ago, I launched the Kickstarter for a game I’m making with The Decemberists: ILLIMAT. It’s a card game for 2-4 players, and you can play it in 15 minutes or an hour. I could describe it in more detail, but you can go to the page and see it right now or if you’d like to see it played, you can watch this gameplay video from One Shot Game Night… or this detailed overview of the game from GeekDad.

But what IS Illimat? Where did it come from? And what, exactly, do The Decemberists have to do with it?

In 2009, The Decemberists were preparing to release the album The Hazards of Love. As Colin Meloy says, they “were doing what most bands do in preparation for such an event: trying out new hairstyles, inviting people to be in their band, and participating in photoshoots.” They had an idea for a shoot in which they’d pretend to be a secret society that met in strange places to play a mysterious board game. Artist Carson Ellis and photographer Autumn DeWilde made an inscrutable two-part board. The shoot happened, the board was tucked away somewhere, and that was that. But over the course of the next six years, the Decemberists began playing more and more games while on the road. At some point someone said “Remember that mysterious board? Could we make that into an actual game?”

I got to know guitarist Chris Funk through Gloom, and he came to me with the idea of making this game. He and Colin Meloy dropped by my house and presented me with the following enigmatic artifact. 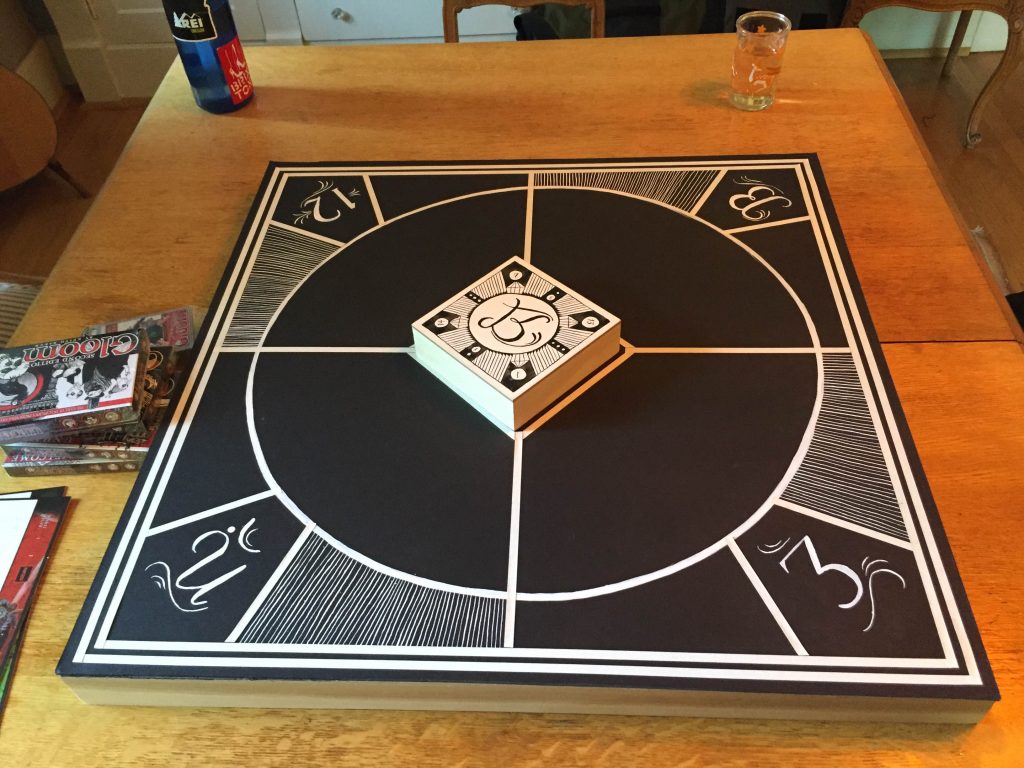 They also had a few specific requests. They want a game that…

The board sat in my basement for a few months while I pondered this challenge. From a design perspective, there’s a bunch of basic challenges. The board is divided into four quadrants. Does each player use a different quadrant? Does each quadrant had a different effect? What’s the relevance of the numbers and symbols in the corners? Most of all: What about that second box that sits in the center? Why do you put a box in the middle of the board – and what can you do with it?

One of the first things that struck me was that we wanted to make the box in the center the actual box for the game. The board was beautiful but also somewhat unwieldy – over time we came up with the idea of putting the design onto a cloth board that could fold up and fit into the central box. I’m very happy with the end result of this: the final game is very compact and transportable, but keeps the basic beauty of the design.

Next, I started thinking about making something that felt as though it could have been “played a hundred years ago and then forgotten.” I picked up my 1875 copy of Hoyle and started looking at games I’d heard of but never played, like Whist and Bazique. I was intrigued by the core mechanic used in Cassino and Scopa, and started experimenting with that. I decided to have each of the four quadrants of the board hold a different set of cards, but not to limit access to those fields to a specific player. This led to the next big jump: The idea that the box in the center would determine the rules that applied to each field… and that when the box turned, the rules would change.

Meanwhile, we wanted something that wasn’t about Hazards of Love, but felt like it could be played in that world. I wanted to make what essentially felt like a Tarot deck from another world. We set the suits of the cars to the seasons – Spring, Summer, Fall, Winter – and created a set of eight Luminaries – the Major Arcana of this deck – inspired by the iconic elements of Hazards of Love. Thus we have The Forest Queen, The Changeling and The River. The central box – which had been named “the Illimat” in the original photoshoot – would set the season, and the season would restrict the actions. Anything is possible in Summer, but you can’t stockpile in Spring, sow in Autumn, or harvest in Winter.

There’s many more details I’d like to delve into, especially the design of the Luminaries themselves, and I’ll get to those in future posts. But that’s how the story begins… and here’s the current image of the game as we envision it, in contrast to that original board in the picture above.

Check out the Kickstarter if you have a moment! We’re off to a great start, but the journey is just beginning. If you have any questions, post them below!

3 thoughts on “The Story of ILLIMAT”