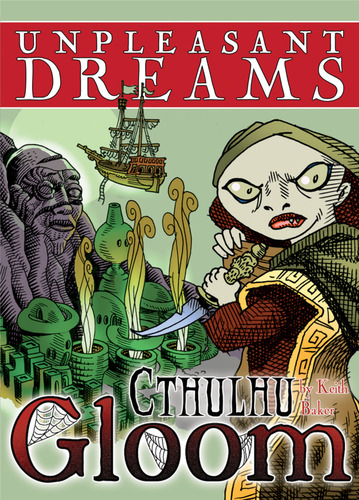 “The Silver Key” and “The Dream-Quest of Unknown Kadath” are two of my favorite stories by H.P. Lovecraft. I love the bizarre fantasy of the Dreamlands, where an army of cats clashes with hungry zoogs and divine secrets are hidden on the distant face of Mount Ngranek. However, “The Dream-Quest” is a very different sort of story from “The Dunwich Horror” or “The Shadow Over Innsmouth.” When I designed Cthulhu Gloom I decided to focus on stories set in the waking world, in part for the benefit of people with less familiarity with the Mythos. It’s hard enough getting a handle on doom-shrouded Innsmouth, mi-go, and shoggoths without having to figure out what Celephais is supposed to be. But I always knew that I wanted to created an expansion devoted to the Dreamlands… and the result is Unpleasant Dreams, which hits shelves this week! 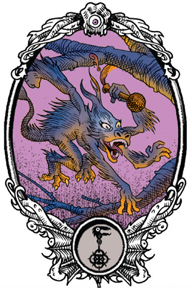 Unpleasant Dreams is a 55-card expansion. It includes a new family of Dreamland natives, which includes a few familiar faces – such as your ghoul Friday, Richard Pickman – a few new characters, like Zoobee the Zoog (pictured above). It adds three new stories, which I’ll discuss in more detail later this week. New transformation modifiers give you the opportunity to Saddle a Shantak, to be Grabbed by (Night)Gaunts, and more… can you control your shantak, or will it carry you off to another family? While many of the cards relate to the Dreamlands, “Dreams in the Witch-House” also has a strong showing, and Herbert West finally has a chance to Cut Down on Classwork and Collect Corpses.

While Unpleasant Dreams doesn’t add any entirely new mechanics, there are a few twists on old cards. Typically, an Untimely Death provides you with additional negative points if you have the story icon that fits the death. In Unpleasant Dreams, many deaths provide special ongoing benefits if you can make the stories line up. Dying in bed is normally a bad thing… but if you have the Dream icon you may go on to become a king in the Dreamlands, and as a result your draw limit is increased by one. Unpleasant Dreams also brings in one of my favorite expansion rules: Guests.

The Gloom expansion Unwelcome Guests introduced a new type of card: the Guest. When Guests are used, one or two are placed in the center of the table at the start of the game. While they are alive, they move between families whenever certain conditions are met. As long as a guest is in front of you, it is considered a member of your family and you gain any benefits it may provide. Unpleasant Dreams includes two Guests: Brown Jenkin and Ephraim Waite. 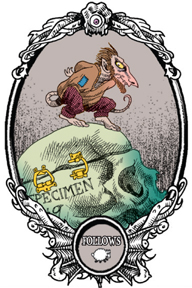 Brown Jenkin appears in the story “Dreams in the Witch-House.” The one-time familiar of the eponymous witch, he is a murderous little creature that can be encountered both in dreams and reality. In Unpleasant Dreams he follows the new Dream icon; whenever someone has a dream, Brown Jenkin shows up to haunt them. He carries an additional power: while he is part of your family, you may play an Untimely Death on a character with the Magic icon as the second play of your turn. It’s dangerous to dabble in the dark arts when Brown Jenkin is around! 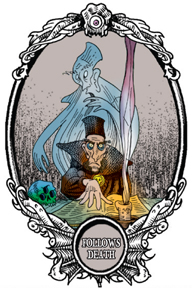 Ephraim Waite appears in “The Thing on the Doorstep.” A sorcerer with a talent for transferring his mind into other peoples’ bodies, he is difficult to kill. In Unpleasant Dreams he follows Deaths; meanwhile, he himself cannot be killed unless he has a Magic icon showing. Just when you think you’ve gotten away with a clean kill, you find Ephraim is still hanging around… and finishing him off will take some work!