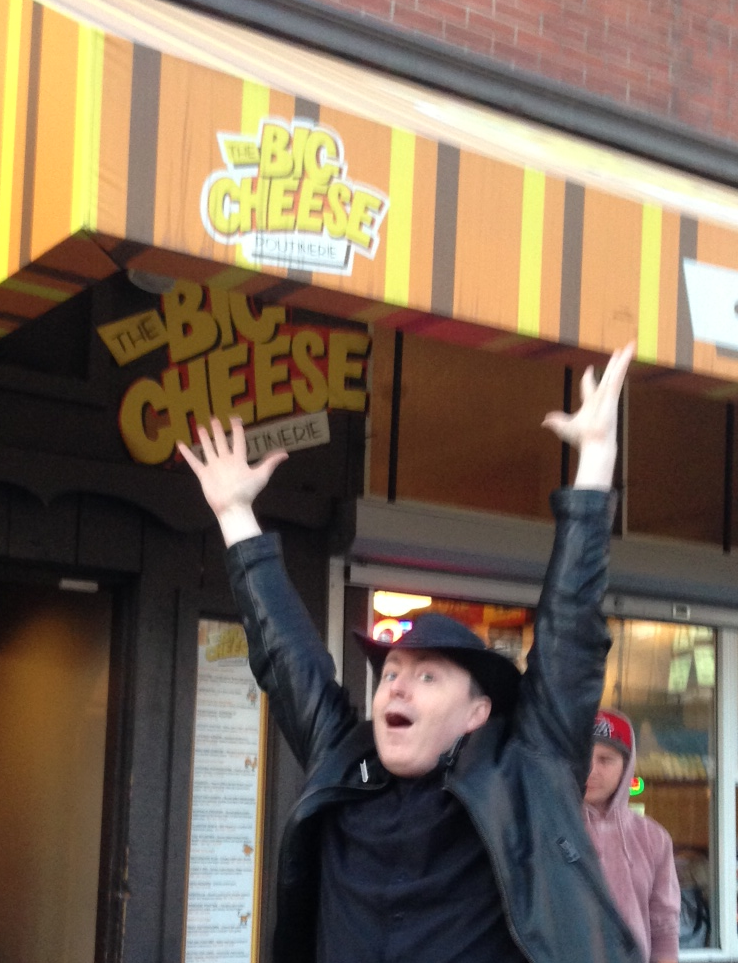 What can I say? I enjoy my poutine.

You might be wondering where I’ve been for the last few weeks. Well, Calgary, for one… I had a fine time sampling poutine, playing games and acquiring fine dice bags at the Calgary Expo. Beyond that, I’ve been very busy. I have a number of projects in the works at the moment – my level for Paizo’s Emerald Spire superdungeon, a new expansion for Gloom, ongoing work on Codex, and two entirely new games—and as a result I’ve had to take a little time off from Dragonmarks and Six Questions. But they will return!

Before I get to the questions, a few other bits of news:

Now on with the questions! First, two in a similar vein…

Since the inception of D&D Next, do you feel Eberron will still have prominence in this new system? Will it still be playable?

Currently WotC hasn’t decided what they are going to do for Eberron support in D&D Next. It’s been said that they will at least convert the races and perhaps the artificer. If you want to see more support, the best thing to do is to let WotC know it. Post on forums! Ask Customer Service if it will be supported! If it’s clear there is an audience that wants support, then it’s more likely that the support will come to pass.

With 4E not receiving a lot of support and D&D Next still some time away, is Eberron sticking with the D&D system, or able to branch as it’s own?

Eberron is the property of Hasbro and Wizards of the Coast, so legally I can’t create new content for it on my own, in any system. I hope that Eberron will be supported in D&D Next and that I will be a part of that, but since it’s currently unknown I’m also developing a new setting, under the working title (and only a working title) Codex. That’s an ongoing, long-term project and I don’t want to discuss it in detail until I have a clear path to release, so expect to hear more about it later in the year.

I was wondering what people called ‘The Last War’ before it ended, and when they started using that name.  I know IRL a very small number of people called WWI ‘the first world war’ when it was just starting, but there were a bunch of other names used at the time.

For most of the people of the Five Nations, it was simply known as “the war.” However, if they were talking about it to a Riedran or Aereni, they’d generally refer to it as “The War of Succession” or “The Succession War.” Cyrans would be more likely to call it “The Insurrection” or “The Traitor’s War.”
Is there any story behind who first called it ‘The Last War’?

I don’t think it’s been stated in canon. I believe that the term is first formally used in the preamble of the Treaty of Thronehold, which essentially states that all signatories have seen the horrors wrought in this grievous conflict, and vow to make this the last time that these nations shall take arms against one another – the last war that Khorvaire will know. The Treaty of Thronehold is as well-known across the Five Nations as the Gettysburg Address is in the USA, and everyone knows the preamble. The Brelish claim that it was Boranel who coined the phrase; the Thranes insist it was Keeper Jaela; and so on.

If we corelate the Last War to WWI, what would be your take on WWII?

While there are many keystones in WWI that relate to the Last War, the end of the war is much closer to that of WWII: the appearance of a weapon that completely changes the face of modern warfare. While few nations believe the peace will last, and all are jockeying for power, no nation would dare to start a new war until the mystery of the Mourning is revealed. How could Aundair dare to employ wide-scale war magics in the field when it’s possible the widespread use of such magics is what destroyed Cyre? How can they dare attack another nation until they are certain that nation hasn’t harnessed the power of the Mourning? Beyond this, there is the fact that if any nation COULD harness the power of the Mourning and weaponize it, who would dare to challenge them? Until you answer the question of the Mourning, it’s impossible to define the shape of the Next War. Will it be fought with almost no magic to prevent another war? Will it be much like the Last War, once it is revealed that the Mourning was a fluke? Or will the Mourning be weaponized, making the new conflict take a completely different form from the last?

What does Eberron look like a thousand years after the era of the printed setting?

What will it look like? A warped wasteland enshrouded by dead-gray mists. Of course, the way things are going it will look like that in just five years.

The “facts” about Eberron are “just what is believed.” How far from those “facts” has the truth gotten in your games? And what drove that departure?

I always tell people not to be bound by canon, and to use the books as inspiration rather than limitation. So, how does MY version of Eberron vary from canon? It would take a lot of time to compile an exhaustive list, but here’s a few things.

I could probably go on for pages. As you can see, most of these aren’t huge changes; they’re just little things. But the short form is I do what makes sense to me for the stories I want to run.

What if the kalashtar rebellion fuels up quori hatred & empowers Il-Lashtavar preventing a change in Dal Quor?

Quori don’t experience emotion the way most mortals do. They aren’t mercurial beings. They don’t go from love to hate in a single day, or even a year. Like most immortals, they are incarnations of ideas; a tsucora quori is an incarnation of fear, a du’ulora an embodiment of fury, and so on. Essentially, a quori who hates can never STOP hating, or hate any more than it already does; hatred is its nature. The kalashtar quori are an anomaly that must be eradicated so they can be returned to the fold—so the rebellious spirit can be eradicated and restored to its proper nature. So first off, the actions of the kalashtar haven’t actually created MORE hatred among the quori; the quori hate exactly as much as they always have, according to their nature. Mortal dreams can affect Dal Quor—but the quori are part of Dal Quor, and their emotions don’t influence it.

With that said, this is largely while the Adaran kalashtar don’t advocate violence. They believe that the turn of the age will occur; it is inevitable. By meditating on il-Yannah they help strengthen her vision and move towards that new age. But they don’t feel a need to try to hurry the change—and certainly not by a spread of violence and hatred.