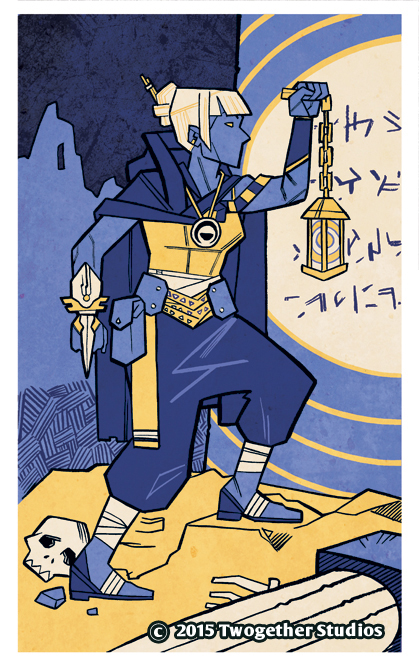 I stared down the character sheet in front of me. There were no numbers, no dice rolls and modifiers. There were a list of traits, a name, a class… and questions. Weighty questions. – Playtester Morgan Hillsman

Phoenix: Dawn Command is a roleplaying game in which you play a champion who’s returned from death to try to save your world from a host of nightmares. When you play long-term, you build a character from the ground up, selecting your School and your Traits and then answering questions about this process. Rich Malena has created an excellent video that walks you through character creation, and you can see how that works here. However, when you’re playing your first session or playing a one-shot you may not have time to go through this process, or you may feel that you don’t know enough about the world to create your own story. To help with this, we provide a set of pregenerated characters so you can jump right into the game. However, one of the most important elements of Phoenix is having a personal stake in the conflict… so even with our pregens, we want you to answer a few questions. Let’s take a look at Elegy, our iconic Shrouded Phoenix.

Lessons and Traits are the things that differentiate Elegy from every other Shrouded Phoenix. Each Trait provides her with a special ability, and the Traits she possesses make her an excellent investigator and assassin. Sneaky enhances her natural stealth, Killer Instincts helps her find weaknesses in an opponent’s defenses, Brilliant Deduction reveals clues, while Seen This Before lets her assist an ally’s action. Psychometry is her unique Shrouded trait, and lets her burn her mystical energy to learn secrets about anything she touches. In addition to these powers, Traits can also enhance any action if you can explain how they are relevant to what you want to do. If the players are trying to understand a mysterious plague that’s overtaken a village, it would help if Elegy had Seen This Before. But assuming that she hasn’t actually seen it during gameplay, it’s up to Elegy’s player to come up with a story about WHERE she’s seen it before. Was it in her first life? Was it during her time in the Crucible, the limbo where she became a Phoenix? You don’t have to tell a story to use a Trait… but if you do, you can get more out of it.

Traits are cards that are in your Action deck, and you can only use them when you draw them. Lessons are ongoing abilities that you can use at any time. Elegy has a base set of Lessons that are common to every Shrouded Phoenix, but not every Shrouded knows Shadow Dancer. This makes Elegy an expert at stealth and lets her play more cards when she attacks from hiding… enhancing her talents as an assassin.

The paragraph that follows is a brief glimpse into the character’s past. When you make a character in Phoenix, the first question is always who you were in your first life – before you died and became a Phoenix. The Empire provides a number of cultures to choose from. Elegy is one of the Shadovar, a traveling people long distrusted because of their tradition of necromancy.

Who were you in your first life? How did you die? Why did you come back? These are the critical questions of Phoenix. You don’t become a Phoenix by chance. If you live a remarkable life and die a meaningful death you have the chance to gain the powers of a Phoenix and return, but it is a long, harsh series of trial. What gives you the strength to make it through those tests? And why is it so important to come back? Returning as a Phoenix means you’ll spend the rest of your lives fighting the Dread; what made this bargain worthwhile for you?

Beyond this, how did you die is important because it is also a question of why are you a Shrouded Phoenix? Your choice of School is based on the reasons for your death and the lessons you take away from it. Shrouded Phoenixes die due to secrets, either in pursuit of secret knowledge of because a secret was revealed. Thus, Elegy’s options all deal with a quest for knowledge. As a Shrouded Phoenix, her investigative powers are dramatically increased.

The goal of these and all of the other questions is to help the GM develop details that will make a story feel personal to you. You aren’t just fighting the Dread because, hey, monsters; this is personal. This is a game where you may have to lay down your life to protect the things you care about, and we want to know from the start what some of those things are.

When you are reborn as a Phoenix, your appearance is essentially about your image of yourself. You might appear exactly as you did when you died, but any aspect of your appearance could change. Age, gender, race, build… anything could change. If you were an old man, do you still think of yourself that way or do you imagine yourself in your prime? If you were a child when you died, are you now the world’s scariest ten-year-old or do you re-imagine yourself in the image of one of your favorite legendary heroes? Aside from your overall appearance, there are two specific things you need to define: your Talon and your uniform.

Phoenix isn’t a game about acquiring loot, because sooner or later you will die and you can’t take it with you. But there are two things that do stay with you, things you carry through the Crucible and on into your next life. Your uniform is the basic clothing and tools you always have with you, the things you need to perform your basic skills; as a Shrouded, Elegy’s uniform can be assumed to include lockpicks and the equipment she uses to investigate. The question here calls on the player to think of something that particularly stands out… a defining element of her uniform.

Your Talon is a unique weapon – a tool you acquired in the Crucible and that you will carry throughout your lives. It is a relic that was used by all of the Phoenixes that have been tied to your particular Flame, but over the course of your lives it will evolve along with you. Thus, rather than finding a more powerful weapon, you will instead invest your Talon with greater power over the course of a campaign.

Phoenixes can use any equipment they can get their hands on. Between supernatural strength and speed a Phoenix can turn almost anything into a weapon, and part of combat is finding ways to use your environment to your advantage. But your uniform and Talon are always with you, and defining them is a way to help visualize your character.

At this point, you’ve got an Action Deck full of cards, a blend of your unique Traits and general actions such as “Strength 3.” You know how you died and what you’re fighting for, and you know the tools you use in that struggle. It’s time to get the story started.

Phoenix: Dawn Command is on Kickstarter right now. In future updates I’ll talk more about both the world and the mechanics of the game. If you have any questions, ask below!