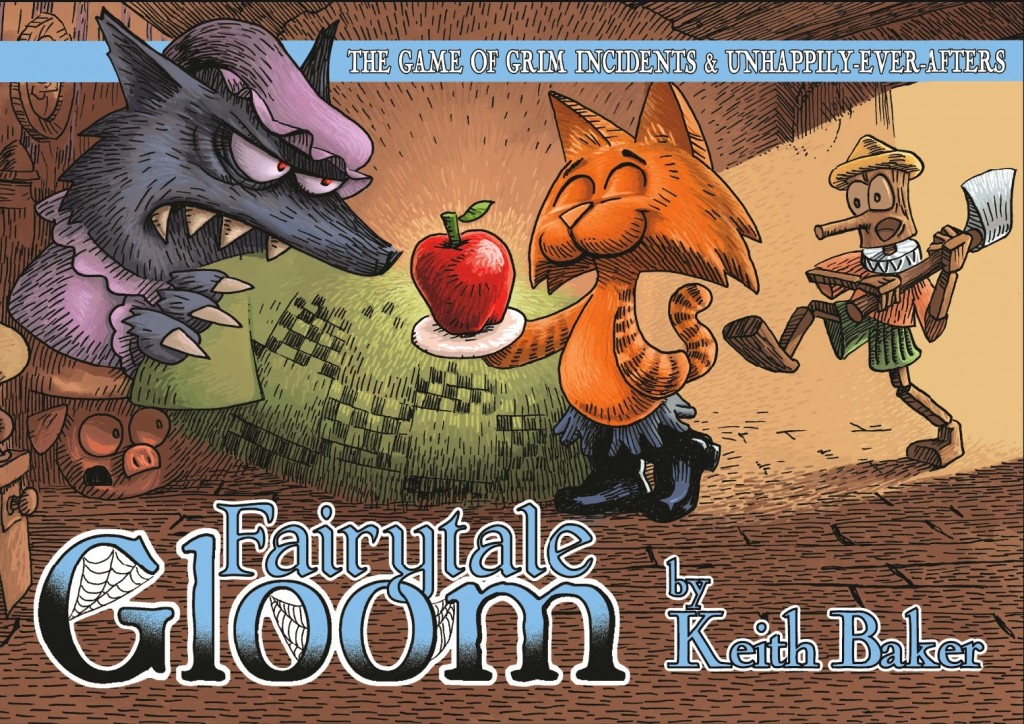 Since the Phoenix Kickstarter campaign ended, I’ve been working hard on finishing the writing for Phoenix and that’s going to be my focus for the next few months. However, I don’t want to completely drop off the face of the earth, and I’ve got a big backlog of Eberron questions to get to.

First, news: Fairytale Gloom comes out this week. I’m very happy with the game and I look forward to hearing what people think of it. One thing I like is that you’re working with characters you already know – which makes it easy to come up with a new story. Furthermore, Fairytale Gloom doesn’t use preset families; instead you assemble a family from the cast of 20 characters. So you can assemble the cast of a classic fairy tale… or you can decide that Snow White, Red Riding Hood and Cinderella are secret agents working for the mysterious “Granny.”

Beyond that, there’s big news in the world of Kickstarter. For those who aren’t familiar with The Doom That Came To Atlantic City, in 2012 a guy named Erik Chevalier licensed a game I’d designed with my friend Lee Moyer, and went to Kickstarter to raise the money to produce it. He raised four times the amount he was asking for; told everyone that he was making the game; and a year later revealed that he was out of money and had never actually gotten around to making the game. Here’s my post from when I received this news. Because Erik had broken his contract, the rights to the game returned to Lee and I. We worked out an arrangement with Cryptozoic where they made the game and game everyone who backed it a free copy. It wasn’t an ideal solution – Erik had promised many things that Cryptozoic couldn’t provide, especially since they were doing it entirely as a gesture of goodwill to the people who’d been robbed – but thanks to Cryptozoic the game exists and made it to the backers. For the last two years there’s been no further news… until yesterday. The FTC has leveled a $112K judgment against Erik Chevalier as punishment for his duplicitous practices. Supposedly he’s also enjoined to honor his pledge to refund backers. It’s of limited effect as Erik is apparently broke – but I’m glad to see SOMETHING done about this. Crowdfunding is an amazing thing. Thanks to people who have put there faith in me I’m producing Phoenix – a game I could never have produced on my own. It’s a chance to bring things in the world that might never exist otherwise, and I hate seeing that trust abused.

So, that’s the short news here: I’m still working on Phoenix, Fairy Tale Gloom will be on shelves any day now, and there is finally some degree of justice for Doom backers.

I have a big slush pile of Eberron questions that I’ll get to as time allows… here’s a few to get the ball rolling again. At this time I have no news about any developments with 5E Eberron. Rest assured, I’ll share news if and when I have any. Now on with the questions…

The Mourning is the big obvious “no canonical answer” Eberron mystery. Any others in the setting that you particularly like?

Where do warforged souls come from? What do the Daelkyr want? What were the Quori of the previous age like? What exactly are aberrant dragonmarks, and why are they starting to appear again after lying dormant for so long?

When running Eberron, what is the single most important thing to remember? How does Eberron differ from other settings?

I don’t think there’s one answer that covers all Eberron games. If you’re more on the pulp end of the spectrum, then you want to look for ways to make the PCs feel remarkable. Never have a fight on solid ground when you could have it on the back of a moving lightning rail or an airship plummeting from the sky. Emphasize the villainy of the villains and the stakes of the conflict, and make sure your players feel like big damn heroes. All of this changes when you go to the noir side of the spectrum. In the mean streets of Sharn, things aren’t so clearly defined. It’s hard to tell the heroes from the villains. Stories don’t always end well – and sometimes it’s best when they don’t. In a noir campaign your want hard decisions and difficult revelations.

But there are a few things that can apply to any Eberron game, and these are things I try to call out when I’m creating an Eberron adventure for a convention or charity event. One of these is the war. Khorvaire is just two years out of a horrific war that ended with the utter destruction of nation. How did the war affect the player characters? Who did they fight for, or why didn’t they fight? How can its impact be felt in the adventure – whether it’s the scars of the conflict or the tensions of the current cold war? How about the impact of industrialized magic… how can you show magic being used as a tool within society?

When running con games I call out elements of the setting that are especially unique. In previous games I’ve used parties of Dhakaani goblins; monstrous agents of the Daughters of Sora Kell; and a Blood of Vol undead equivalent of the A-Team. It’s a way to immediately impress on people that things aren’t what they’re used to – that monsters aren’t always bad guys and that the bad guys aren’t always monsters.

Eberron is a world that is waiting for heroes. Do you think it’s a world with a place for a campaign for high level evil characters? Beside that forces of evil look already preeminent, I am worried that a ruthless high level cleric or mage could easily overpower any human institution.

This question comes up a fair bit. There’s a lot of different ways to answer it. But the first question I have is what’s the experience your players are looking for? In choosing to be evil, what do they WANT their story to be like? In my opinion, RPGs are about building a collaborative story. As DM, your challenge is to build out that story, to make it challenging and interesting. In choosing to be evil, do your players want to simply achieve wealth and personal power? Do they want to create a criminal empire? Do they want to depose rulers and take over Khorvaire? Each of these stories builds room for different sorts of opposition. An equally important question is what they want the tone to be… is this story more pulp or noir?

Personally, I see an “evil” campaign as leaning more towards noir. The typical noir story has very few heroes… but deals with the fact that villains will happily prey on each other. In a noir story, I’d reveal that the world is a lot darker than anyone realizes. I’d play up the number of organizations that are secretly controlled by the Lords of Dust, the Aurum, or the Dreaming Dark. I’d work in the extremely ruthlessness of organizations such as the Trust, the Citadel or the Chamber. I’d have my villainous PCs constantly on edge for the threat of betrayal, assassination or dangerous revelation. Sure, that institution LOOKS like an easy target… but that’s because you don’t realize that the “low level cleric” running the temple is actually an epic level rakshasa or an Inspired. In short, in a noir villain campaign, I’d pit the PCs against other villains who are every bit as powerful as they are – or more so – and in a far better starting position.

On the other hand, perhaps the players WANT a pulp-style evil campaign in which they are the worst villains the world has every seen. In that case, I’d play down the Lords of Dust and Dreaming Dark; if the players WANT to be the coolest villains around, it’s not so much fun to be constantly tripping over older evil conspiracies. Instead, I’d create heroes. Eberron is intentionally designed as a world in need of heroes because the PCs are expected to fill that role. If the PCs instead choose to play villains, as DM I’d create the heroes that would usually be PCs. Let’s have Tira Miron reborn as a new crusader of the Silver Flame. Trade out the Lord of Blades for a heroic warforged uniting his people into a force for good… a Professor X instead of a Magneto. Perhaps the Twelve assemble a team of dragonmarked champions as their own answer to the Avengers. For that matter, you could bring in any of the protagonists of the Eberron novels; the reason novels aren’t canon is because we don’t want these heroes treading on the toes of the PCs, but if the PCs don’t want the part, why not? Alternately, you could have a truly powerful group of heroes – heroes who always seem to come back no matter how they are defeated or destroyed. The ultimate revelation is that these champions are actually shapechanged dragons – agents of the Chamber acting to preserve their preferred path of the prophecy. They always return because even if killed, a new dragon can assume the role of the fallen champion.

Basically, the default assumptions of Eberron assume the PCs are heroic. If they aren’t, change those assumptions. Create what you need to create to present the challenges the PCs want to deal with. And don’t be afraid to LET the PCs disrupt existing organizations, if that’s the story they want to be part of. LET them throw Kaius out and take over Karrnath… because once they’ve got territory to control, you’ve got a lot more hooks to work with.

That’s all for now!