Big news: Phoenix is in layout! It’s been a long stretch of writing and editing, and I’m going to be off the internets for a little while. In the meantime, we wanted to let you see Phoenix through the eyes of some of our playtesters and developers… starting with Rich Malena of the Going Last Podcast. 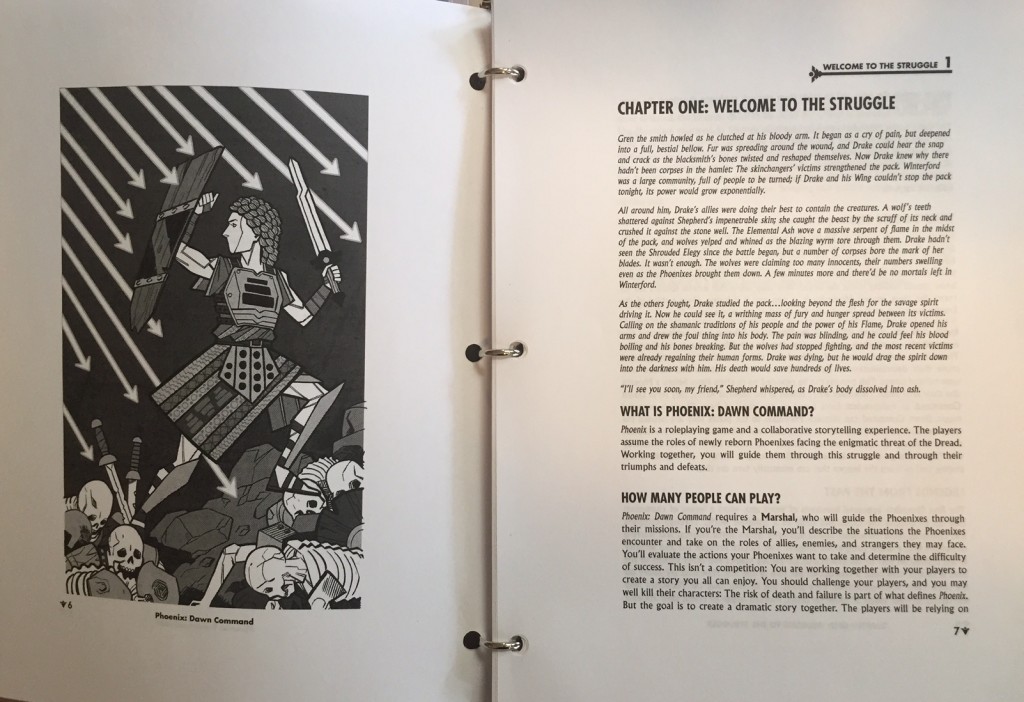 Hey folks! I’ve been given a chance to give you all a behind-the-scenes peek into the world of Phoenix: Dawn Command. For the last two years, I’ve been fortunate to sit down at the table and learn the game from both Keith and Dan, and see the eventual changes in the Phoenix system, the Schools, and the missions over the course of the game’s development. As we grow ever closer to the final release of the game, I wanted to share a couple of these new ideas that I just can’t stop talking about.

One of my favorite progressions to watch is the evolution of the Schools. The core concepts of each School remains consistent, but the lessons and traits have been repeatedly refined and improved. From the beginning, many of the Schools—Bitter, Shrouded, Devoted, and Durant—felt solid and uniquely tied to the mechanics of the game. Devoted could easily use their cards to assist their friends to a unique degree. The Shrouded master skills and can add important conditions to their enemies as they strike from the shadows. The Durant is an unstoppable defensive powerhouse and the Bitter gleefully uses their wounds to strengthen their vicious attacks. If you played any of these four in demos this year, you’ll be happy to see how their roles have been tightened up while keeping true to their original design.

However, our latest playthrough this summer featured the newest versions of the Elemental and the Forceful. Since these two Schools weren’t sent out with the demo set, most playtesters haven’t had the chance to see how they work. Let me see if I can help!

The Elemental is a whirlwind of arcane forces, who uses their very life force to make their powers even more devastating. In game terms, the Elemental has the ability to wound themselves to gain Sparks, which then fuel Lessons and abilities. Unfortunately, since healing is rare in Phoenix, this cycle often ends with the Elemental burned away before the end of the mission. The surge of power is amazing to watch, but being too careless often leaves a Wing without one of the most potent weapons in an important situation.

However, if they’re lucky, the Wing may also have a Forceful along to help make up for it. The Forceful is a master of motion, with a unique ability to cycle through their deck and can sometimes play half their cards on a given check. The Forceful feels fast. The Forceful can also gain momentum throughout a Mission, slowly ramping up to ever more powerful levels. When they’ve reaching maximum capacity, a Forceful is a sight to behold.

The thing that continues to amaze me about Phoenix is that the Schools play so differently. The simple mechanic—familiar to anyone who play’s deckbuilders—leads to an enormous amount of variability in playstyles. Even within Schools, there are plenty of opportunities for choice. My Shrouded is mainly focused on Skill spreads, but that’s because I intentionally decided to play more of a scholar than an assassin. But I could have certainly decided to go the other way. Seeing all the ways people are choosing to play Phoenix makes me really excited about leaping in and trying a new School someday soon!

It’s also been a ton of fun to see the growth of the Missions that are included in the core set! The story is tightly woven together to create an outstanding narrative arc that leads you through the world. I really don’t want to give away any of the secrets and surprises you’re all preparing for, but believe me, the story is going to be worth it. A lot of early ideas have been reimagined and given new mechanics to ensure that every Phoenix needs to be on their toes and ready for brand new experiences.

From the beginning, Phoenix has been a game about telling stories. Stories of sacrifice in the face of the terrifying Dread. Stories of heroism when everything is on the line. Stories of choices and consequences. Every single mechanic in the game is built with this narrative in mind. Even after two years of playing Phoenix, I still can’t help but tell stories when I act. I never get tired of talking about how my character moves throughout the Daylit World, or listening to my friends describe their own actions in our fight against the Dread.

As we get closer to the day when everyone has the chances I’ve had to play Phoenix: Dawn Command, I can’t help but feel so very excited for all the stories that are about to be told. After seeing the art, the rules, the descriptions, the challenges, and most importantly the care that is going into making this game a reality, I’m certain that no one is ready for all of the surprises in store.

Rich Malena shows you why you need advanced mathematics in your life, and is basically as close as you can get to a real Defense Against the Dark Arts instructor. Rich also can’t shut up about games on GoingLast.net, at youtube.com/RichardMalena, or on Twitter @rmalena.