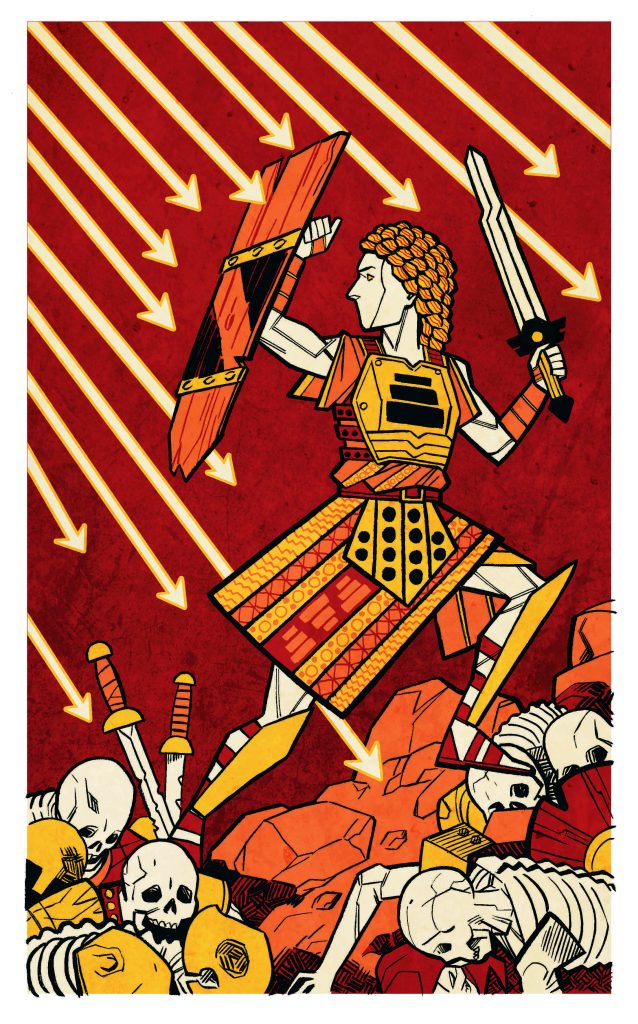 “You shall not pass!” Gandalf facing the balrog is one of my favorite moments in a fantasy movie. A hero facing an overwhelming evil and ultimately laying down his life to save the rest of the party. But it’s not a situation I’d typically put into an RPG adventure. Usually, putting players in a scenario where the only way to prevent the death of the entire party is for one of the PCs to sacrifice themselves is a cruel move. And yet, that sacrifice — bringing down an impossible foe through an act of courage — is a compelling moment. How do you bring that to the table?

If you’re reading this, you’re probably familiar with the Eberron campaign setting I created for Dungeons & Dragons. What you may not know is that in the last year I’ve released an entirely new fantasy roleplaying game that I codesigned with my friend Dan Garrison. This is Phoenix: Dawn Command, and now that Scott Pilgrim’s Precious Little Card Game is out, Illimat is on a boat and Action Cats is at the printer I’m going to be putting more time into Phoenix. So I wanted to take a moment to tell you about Phoenix and why you should check it out. Before I get to deep in the details, I’ll note that you can get Phoenix from our website or from Amazon, with Prime shipping through Amazon and free shipping in the US from my site.

Phoenix is set in the fantasy world of Dalea. It’s a traditional RPG, in the sense that you have a gamemaster who guides the story and that it’s best in campaign play, where you have time to develop your characters and your stories. Beyond that, it’s what you might get if you stirred together Dungeons & Dragons, Call of Cthulhu, and Exalted. Dalea is caught in the grip of the Dread. Across the known world all manner of supernatural terrors are crawling out of the woodwork. Mortals can’t fight these things… but you’re not mortal. You’re someone who died and managed to earn resurrection and the power of a Phoenix. You can face a mob of chanters or a Fallen prince. But Phoenix is about more than just taking on an undead army or dueling demons. You need to find out WHY the Dread is happening, to understand the nature of each of these threats and how they relate to one another. Can you find a way to lay the Bones to rest? Can you learn how the Chant begins or find a way to cure its victims? Phoenix is built on a foundation of over-the-top action, but to truly succeed you’ll have to channel your inner investigator and solve the mysteries of the Dread.

Mechanically, Phoenix has a number of distinct features. The first is the fact that death is how your character grows stronger. When you die, you are eventually reborn with greater power. This isn’t a trivial thing. Hearing about this, people often ask why their characters wouldn’t jump off a few bridges in order to level up. There’s a few things that play into this.

So death isn’t the end — at least initially — but neither is it trivial. Beyond this, the abilities you gain when you’re reborn are based on the nature of your death and the lessons you’ve learned from it. You don’t need to fear death, but you want to make sure that each moment counts. 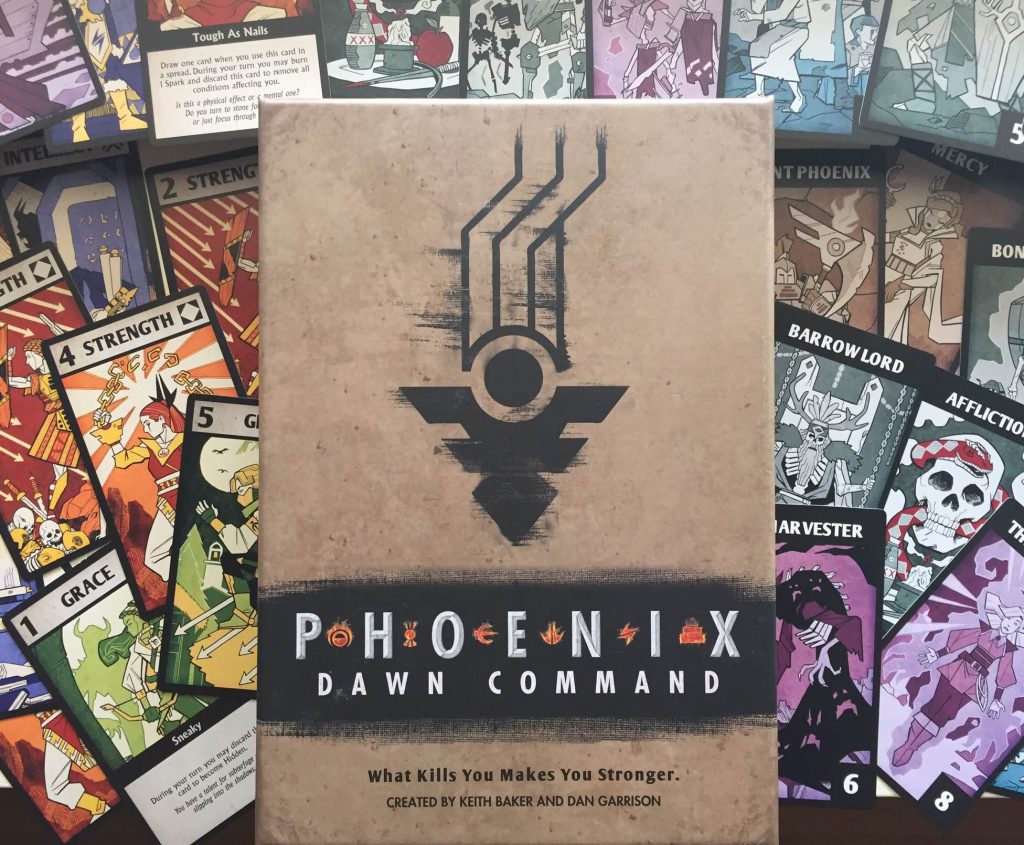 Another unique aspect of Phoenix is that it uses cards instead of dice. In PDC each player has a unique deck of cards that reflects the abilities of their character and largely takes over the role of a character sheet. You have a hand of action cards; when you want to take an action you describe it to the gamemaster, and they tell you the suit and value you’ll need to play to succeed. Do you have the cards in your hand that you need to match or exceed that value? If not, you have a pool of mystical energy you can burn to push beyond your limits… but when you use it all, you die. So you can buy success in Phoenix, but the question is always if it’s worth it. This is one of the critical aspects of the game: presenting players with interesting and difficult decisions. There’s a bomb in a room full of innocent people. You might be able to disarm it, but you can’t be sure of the difficulty and if you try and failure it will detonate and kill everyone in the room. On the other hand, you could throw yourself on the bomb: you will certainly die, but everyone else will definitely survive. What do you do? Your fate isn’t determined by a random die roll; it’s a question of evaluating your resources and deciding which path you want to take. Beyond this, because you always know what you have in your hand, what you rarely have is wasted action. In a system based on dice, you’ll frequently attempt to do something and fail when the dice don’t go your way, and you accomplish nothing on your turn. In Phoenix, you essentially know your die roll ahead of time – you know what you have to work with in this turn. So if you have a bad hand, the question is can you find something useful to do with it, whether that’s taking on an easier task or burning sparks to push beyond your limits. But you don’t have that moment of trying to do something cool and rolling a two. Instead, you know you’ve got the two; what can you do with it?

If you’d like to know more about Phoenix, you can ask questions below. In addition, here’s a few things I’ve already written.

In the months ahead, I’ll be delving deeper into the world of Phoenix. Beyond this, we’re evaluating print-on-demand options for creating expansions, and we’re also looking into creating an OGL so people can post their own Phoenix missions. And for those who really want to cross wires, I’ll be looking at what it would mean to run Phoenix in Eberron.

Could you explain the different types of Phoenixes briefly and why they have their unique abilities? Did certain types of death suggest certain abilities or Phoenix paths?

There are six Phoenix schools. Each one provides different abilities, and yes, each one is tied to the nature of your death and the lessons you take away from it. The Devoted Phoenix died for others, and their powers help them strengthen others and work as a group. The Shrouded Phoenix died because of a secret, and they excel at uncovering secrets and hiding from others. The Bitter Phoenix died as a failure, and their lessons are about anger and revenge. You can find deeper descriptions of the six schools here.

Thanks for reading. I hope you’ll take a look at Phoenix: Dawn Command. If you have questions — or if you’d like to share your own personal experience with Phoenix — post below!