Phoenix: Dawn Command is a card-based roleplaying game I’m developing with Twogether Studios and my friend Daniel Garrison. The game is on Kickstarter right now; if you’d like to stay on top of the last developments, get on our mailing list or follow @Twogetherstudio on Twitter. 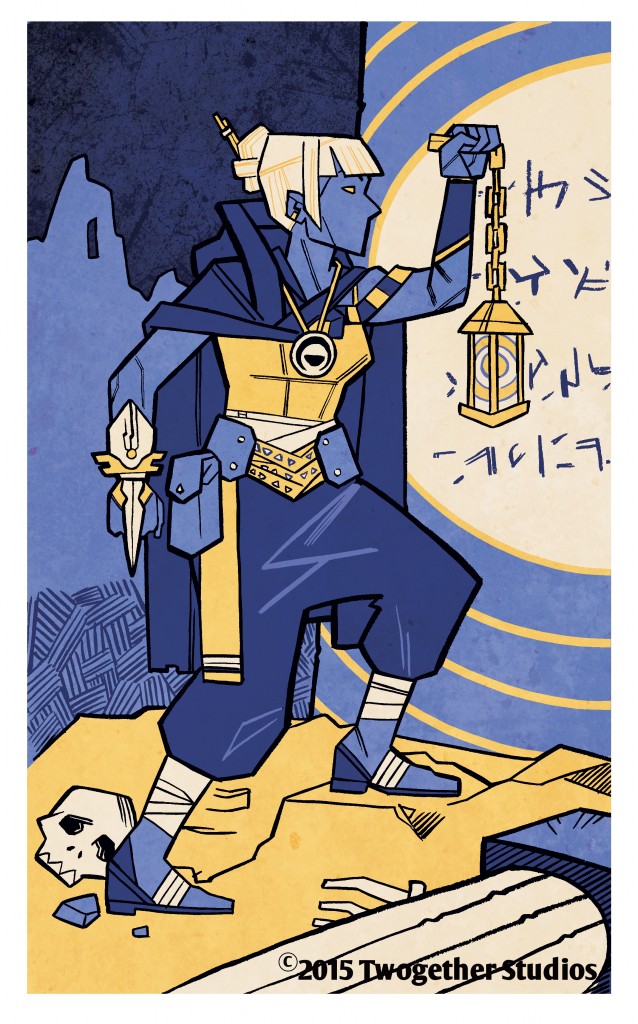 The world of Phoenix: Dawn Command is under siege by a host of horrors. An unstoppable legion of fallen soldiers advances across the south. Werewolves and skinchangers prey on the unwary. Entire cities have fallen to a chant that turns all who hear it into mindless killers. Any nightmare you can imagine could be part of the Dread. Mortal soldiers are no match for most of these threats. But for the first time in centuries, Phoenixes are returning.

The Phoenixes are champions imbued with supernatural power. But no one is born a Phoenix. If you lead a remarkable life and die a meaningful death, your spirit can be drawn to a limbo called the Crucible. Here you go through a gauntlet of physical and spiritual trials that will test you to your limits and beyond. Time moves differently in the Crucible than it does in the Daylit World, and you could spend decades proving yourself in these trials. If you make it through, you are bound to a source of mystical power – your flame– and reborn in the Grand Aerie as a Phoenix.

Phoenixes are divided into six schools. These reflect the lessons you have learned from your life and your death, and determine the sorts of powers that you possess.

I’ll look at each school in more detail in future posts. The critical thing is that the first thing you have to do when you’re creating a character in Phoenix: Dawn Command is to determine how you died, who you were before, and what gave you the strength to make it through the Crucible and return. Because you may have spent years or decades in the Crucible, you could have been anyone in your first life. You could have been a soldier, a schoolteacher or even a child. Whoever you were to begin with, by the time you make it through the Crucible you are one of the most dangerous people in the Empire. One other question in character generation is what do you look like? When you are reborn, your physical appearance is tied to your self-image; how do you see yourself? Race, gender, age and any other details could change… and could change again each time you are reborn, as your concept of who you are evolves. As a Phoenix you possess supernatural physical power that’s not limited by your physical body… so your Bitter could be an old man or a little girl and still tear your enemies apart.

A critical aspect of being a Phoenix is that your power isn’t unlimited. You have a pool of mystical energy you use when you perform superhuman feats, and when that power runs out you die. So you can do amazing things… but you need to choose the right moment to spend that power.

When you die, this process repeats itself. You are drawn back to the Crucible to learn new lessons… represented by new cards that are added to you deck. And once again, the critical question is always why you died. Not how… it doesn’t matter if you were burnt to ashes or torn apart. The question is why. Did you die to protect others? Did you die because you weren’t strong enough? Did you simply fail? It’s not simply that death makes you stronger – it’s that your powers reflect the lessons you’ve learned from each life and each death.

In future posts I’ll go into more detail about the world of Phoenix, the nature of gameplay and the six schools. Until then, get on our mailing list or follow @Twogetherstudio on Twitter for the latest news!