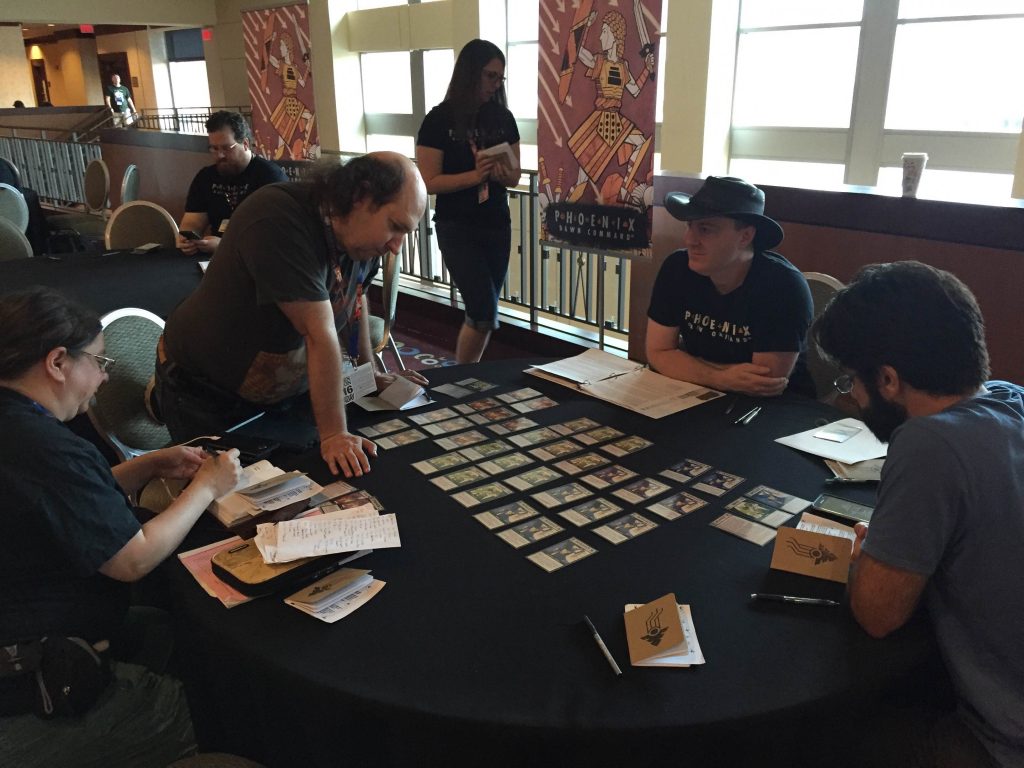 Phoenix is out in the world! We just got back from running demos at Gen Con. If you’re looking for a copy, you can buy it on the Twogether Studios website. We are working on making it available to brick and mortar stores, and if you are a retailer who wants to be kept appraised of this, email us at Info@twogetherstudios.com. If you want to see Phoenix in action, you can check out this broadcast from Saving Throw, which will be a continuing weekly series!

This is a very exciting time for me. I’ve been working on the game for over three years now, and people are finally able to play it. At the same time, I’m very nervous. What did we miss? Will everything make sense to people? With any project of this size, it’s inevitable that something will slip through the cracks. Eventually we’ll have a FAQ up at Twogether Studios, but for now, here’s some questions from the Phoenix Dawn Command Facebook group. if you have questions, post them below!

Do you plan to publish expansions and to develop the world further?

Absolutely. One of the main reasons I’ve wanted to create a new world is to have the ability to explore it as deeply as time allows. There are a number of different things on our radar…

These are all things we could do, but we’re a small company – so we’re limited both by time and resources. In days ahead we’ll be polling the player base to see what you want. Would you prefer more premade missions? Or would you rather have more information about the provinces and cities of the Empire? Let us know in the comments below! Beyond this, our ability to support the game will definitely be linked to the number of people playing it. So if you like it and want to see more, please spread the word.

What movies/tv shows/novels do you think best represent the Dawn Command game? I’m having a tough time putting my finger on it, combining elements of magical swordsman, swashbuckling, and Roman legion.

I’m not personally aware of a show or book that perfectly captures all the aspects of Phoenix. Here’s a scattershot of things that touch on some of it.

If YOU have a thought about a show, book, or movie that you think captures the mood of Phoenix, post it below!

The Bitter didn’t exist in the Phoenix Imperium, meaning there were only five schools. The Devoted symbol has 6 points on it, which represent the Schools. Did it change when the Phoenixes begin to return? What were the Marshals’ reactions to the first Devoted with an altered symbol, let alone the first Bitter to appear?

Excellent question! The trick is that the Empire didn’t create the School Symbols; they are artifacts of the Crucible. So the Devoted symbol has always had six points and always been seen as “A group joined together” – even though the points don’t quite add up. The question is: assuming the six points of the Devoted symbol do represent six Schools, was the six School ALWAYS Bitter, and simply unrecognized in the Dawn Legion? Or was there a different School that never showed up, which was in some way corrupted or warped to become Bitter? Or crazier still… is Bitter NOT a School at all, and there’s still some other sixth School waiting to be seen? And if so, what are the Bitter Phoenixes? Some scheme of the Fallen? A corruption of the Flames?

As for the Marshal’s reactions, this is something we’ll explore in more depth in the future. The Marshals are working with limited resources and will essentially use whatever resources come their way. You can be sure that some of them – specifically, the Durant Marshal Honor – are very concerned about Bitters, while Winter is likely fascinated by them and studying them very closely.

Are Elementals really the only Phoenixes who can ranged attack? A Shrouded can’t use a bow or throw a knife?

The Elemental is the only School whose core combat style allows ranged attacks. But there’s a variety of ways to make ranged attacks. Most of these rely on the Talon. Mundane weapons aren’t especially effective against most manifestations of the Dread. A dreadknight is solidified fear; there’s nothing for an arrow to hit. A Talon is a conduit for the Phoenix’s supernatural power, and can bring down things that can’t be dealt with by normal weapons. With that in mind, here’s a few ways to make ranged attacks.

So if you have a vision of a Forceful archer or a Shrouded who throws knives, define your Talon as that ranged weapon and choose Epitaph or Thoughtcoil at Rank 2. For your first life you’ll have to burn a Spark each time you make a ranged attack, but it only takes one good death to get your concept to work.

First of all, I’d like to clear up something that seems to be a common point of confusion. A Trait has three elements.

You can always use the Trait as a normal card of its suit and value… just adding it to the spread as an Intellect 1. You don’t have to explain anything or tell a story. However, in this case it counts towards the limit of cards you can play in the spread, and the suit has to match the limitations of the spread.

If you can narratively explain how the descriptor fits the action you are performing – where you’ve “Seen This Before” and why that experience will help you now – you may add the Trait to your spread as a bonus card. It adds its value to the spread, but does not count towards the card limit, and you can play it regardless of suit.

You may use the power of a Trait any time you use it in a spread, in addition to adding its value to the spread. Certain cards have powers triggered when they are discarded – this is NOT the same as adding the card to a spread.

Can I play 2 traits in a Row, as long as I can explain them in the narrative?

Yes, you can play any number of Traits as part of a spread. If you can give a narrative explanation, they’re bonus cards; otherwise they count towards the card limit.

My three person wing has a hard time getting 15+ for skill checks. What’s a good way to increase skill spreads for low rank Phoenixes?

The critical answer: TRAITS. Here’s a quick breakdown of the elements of a Skill Spread.

Essentially, fifteen is close to the limit of what you can do with no help and no special abilities. Hitting a thirty is something that will require some effort, both on your part and potentially on the part of your wingmates. If you can do it, it should feel like a triumph.

When putting a trait in a wingmate’s spread, do you still get to draw a card if the trait says “draw a card when you use this in a spread?”

No. Technically, you never put a Trait in a wingmate’s Spread – you discard the card to add its value to the Spread. This means you don’t trigger effects that say “When you use this in a Spread” because that’s not what you did – you discarded it, and in so doing you gave the person making the spread a boost.

That is correct. New action cards are always draw from the suits of your core School, while new Traits and Lessons are drawn from the School of your most recent death.

When a Phoenix advances and picks a lesson from a new school, are they limited to the lessons available depending on if that other school is in play, i.e. I’m playing a Durant, but die a Bitter death. Can I take a Bitter lesson that’s already in play or can I only take Bitter lessons that are still in the box and not attached to the Bitter player?

With the default set, the idea is that you can only take the Lessons that remain… and if there are no Lessons available (because other players have taken them all) you can take a Lesson from your Core School. With that said, this is largely an artifact of the limited card set. It is our intention to make additional Lessons and additional copies of the existing Lessons available in the future, and I’m fine with a player simply writing down the details of a particular lesson and having it on a “virtual card”. With that said, the Core Lessons are only available to someone who dies their first death in that School. I’m fine with two people having the Shrouded Shadow Dancer Lesson, but your Forceful can never get one of the Shrouded Core Lessons.

How do you balance the experiences of the wingmates, if one character dies more often than his wingmates?

This isn’t actually as significant a problem as you might think. A higher-ranking Phoenix has more power, but a lower-ranked Phoenix can push themselves to hit high values by burning Sparks… and they can afford to be more reckless with their resources because hey, they’ve got more deaths to work with.

With that said, sometimes it’s no fun for a player to be the odd duck who doesn’t die, and whose friends are all tougher than they are. This issue is addressed on page 143 of the Marshal’s Manual: If a character just isn’t dying in missions, you can always work with the player to come up with a satisfying story of how they died between missions.

Beyond this, Reward Cards (Page 153) are a way to strengthen Phoenixes who just won’t die, so they can still feel a little special… assuming that they’ve done something worthy of reward!

Which challenges count as living for the Devoted ability Share Pain?

The only Challenges that are immune to Share Pain are those listed as “Undead” (look on the back of the Challenge card). These Challenges generally use a grey color palette (versus blue for mortal and purple for Fallen). So Chanters are still alive and Share Pain works on them, but Whisperers are undead and immune to its effect.

Do the bonds that specify turns work out of combat? The Durant Bond allows the player to burn a spark to let another play draw a card. If my wingmate is trying to make a grace skill spread out of combat, but has mostly Intellect cards, can I use my durant bond to let them draw another card? Similar question with the devoted bond (and any other similar bond), can I return a committed spark to the devoted out of combat to draw two cards to take two sparks?

Yes on both counts. The player making a spread is the active player and it is their turn – even if it’s out of combat and you aren’t tracking turns. So that player can draw on the Devoted Bond. What this means is that you can only use it once per spread; essentially, any time you take a significant action out of combat, it’s “your turn.”

This ties to the fact that you redraw cards immediately after resolving an action outside of combat… as if you took a turn and reached the end of it.