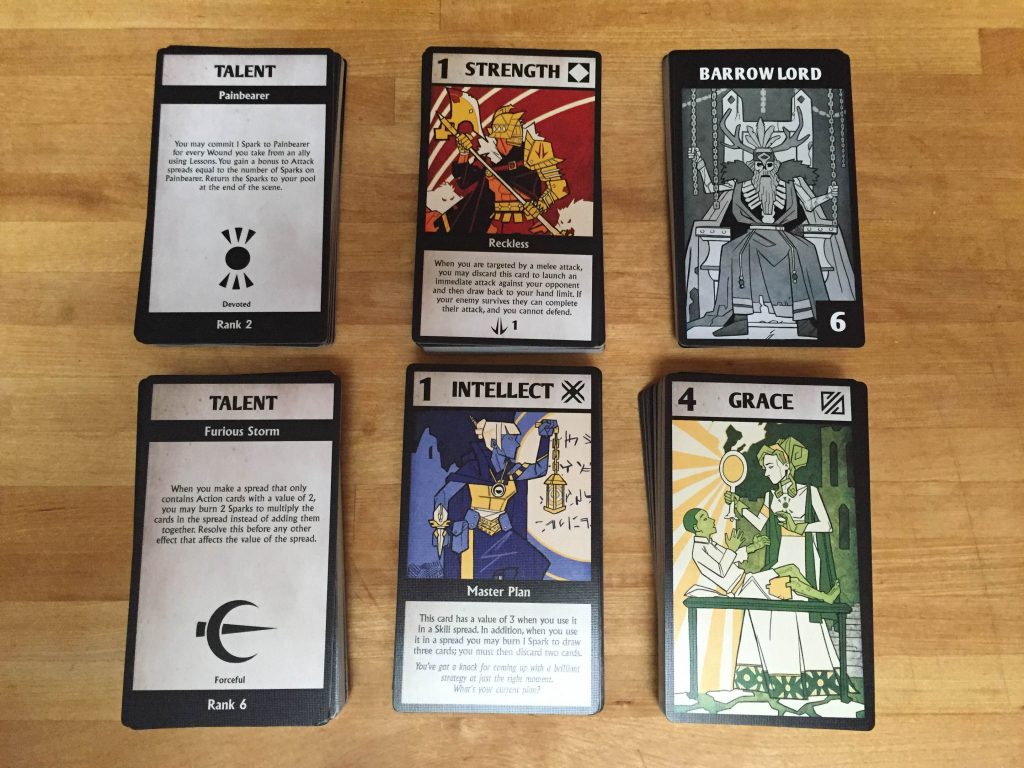 Phoenix is at Gen Con 2016 – follow the link for a list of events, or stop by room 143 in the Convention Center to get a copy. Whether you backed the Kickstarter, get it at Gen Con, or get a copy from Twogether Studios, when you open the box you’ll notice a few things. First, it’s heavy. The box contains a 460 page book and 296 tarot-sized cards, which is basically like buying four actual Tarot decks. Second, when you open it up, the cards are shrink-wrapped in six individual piles, as shown above. However, they aren’t actually sorted. So… what do you do with all of these cards? Here’s my guide to sorting your decks.

The game includes eight Affliction cards, six Talon cards, and a batch of Challenges (Name on the top, Defense in the corner, monster in the middle). Challenges and Afflictions are cards you’ll use when running a mission. The Talons will go to the Phoenixes, but not right away. 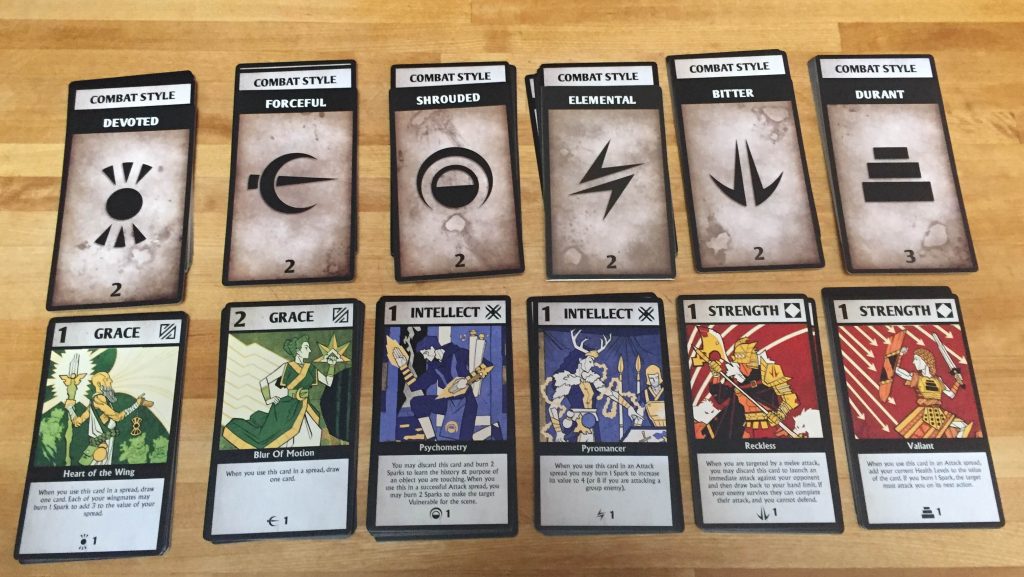 You’ll find six cards with the names and symbols of the six Schools. In addition, there’s a large number of tan Lesson cards (Talents, Combat Styles, and Skill Specialties); each of these has a School symbol and a rank at the bottom. Sort these by School. In addition, there’s a number of Traits tied to Schools, which also have the School and rank at the bottom. Put all these together, so you have a pile that has the Durant Lessons & Traits, the Devoted Lessons & Traits, etc. These will get used in character generation and whenever characters die and are reborn. 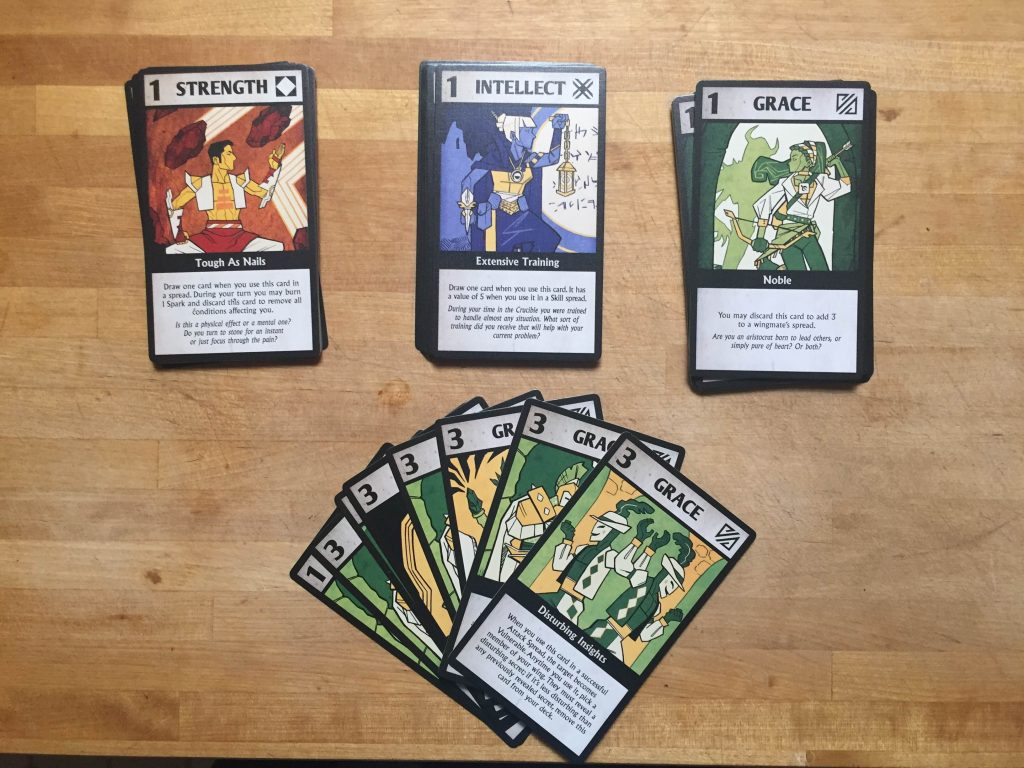 Traits are action cards that have text and titles. Separate these by suit: Strength, Intellect, and Grace. You’ll also find eight special Grace Traits with different pictures than the others. These are tied to the missions and rewards for heroic actions; set them aside. 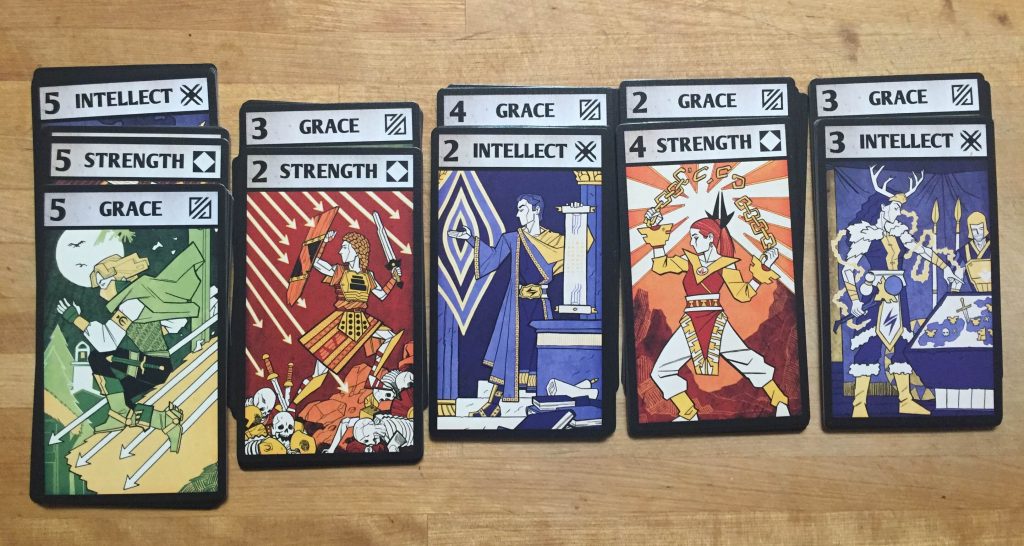 What’s left? The action cards, which form the bulk of the player decks. The simplest thing is to sort these as you will need them for players. Each player gets 16 action cards: two copies each of Grace 2-4, and two copies each of either Strength 2-4 or Intellect 2-4. The cards with a value of five will be gained through rebirth, so set those aside.

By the end of this, you’ll have a pile of Challenge cards and Afflictions for the Marshal; a pile of cards tied to Schools; and a pile of Traits and action cards for players.

Any questions about this or other aspects of Phoenix? Ask below!