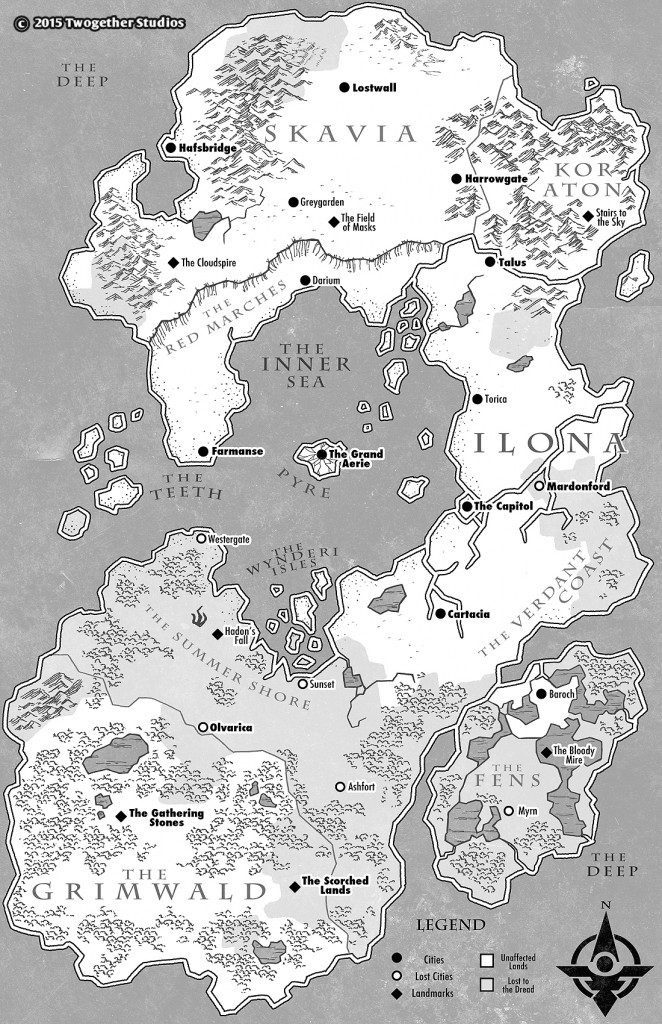 In this dark time we have one hope: Phoenixes are returning. Every citizen knows tales of the Phoenixes, champions who can face death and return stronger than before. In the centuries following our brutal civil war the Phoenixes have become legends… and now you are one of them. Whoever you were in your first life, you have overcome the challenges of the Crucible and returned to the daylit world with the power to face the forces of the Dread. Go forth. Complete your mission, discover what you can of the enemy, and don’t place too high a value on your own life. Die well and you’ll return stronger than before. Just make certain that you make each death and each life count.

We’ve got just over a week to go in the Phoenix: Dawn Command Kickstarter campaign. We’ve hit our initial funding goal, and now we’re working towards stretch goals… including story elements designed by Jason Morningstar, Ken Hite, Robin D. Laws and more! If you want to see (or hear) more about how the game works, you can check out Richard Malena’s videos on Character Creation, Skill Spreads and Combat, or listen to a full session of play on the One Shot Podcast (part one and part two).

Phoenix: Dawn Command is more than just a game. It’s a new fantasy setting. Dan Garrison and I have been developing it for the last 18 months, and we’ll continue to explore it in years to come. The game includes a guide to the world of Phoenix which gives you all the information you need to develop stories of your own.

When I develop a world, one of the first questions I ask is what sort of stories the setting supports. What are the questions it asks and answers? What makes it interesting and different from other worlds? Eberron was designed to have a very different flavor than traditional high fantasy, and Phoenix is just as unique. It is a world facing a threat so dire that sacrificing your life to accomplish your mission feels justified… and a system that gives you greater control over your actions than generally comes from the roll of a die.

Magic exists in the world of Phoenix. But it’s not a tool that has been harnessed by civilization. Instead it is a powerful and dangerous force, still largely unknown and unmastered. Every culture has dabbled with magic in different ways, and these practices produced both wonders and terrors. Because of the danger, the first Phoenixes abolished these traditions when they conquered the Known World and established the Empire. The shamans of the Grimwald still revere the forces of nature, but it has been centuries since they’ve bound primal spirits to their warriors. While the Shadovar respect their dead, few among them have preserved the old paths of necromancy. Skavi warlocks are forbidden from bargaining with the Fallen Folk, though some still believe that their families are bound by ancient pacts. The power is still there, but the people of the present age know little about its potential… or its dangers. This means that normal people largely live in a world without magic. The fastest way to travel is still horse or boat. Long distance communication is very limited. This means that it’s very difficult for people to respond to the challenges posed by the Dread. When there’s an outbreak of the Chant in a village, but the time people in the next village over even hear about it, it’s too late to do anything. Even if speed wasn’t an issue, the Imperial army simply isn’t equipped to handle spirits of vengeance or skinchangers. Essentially, this is a civilization without magic that is now facing myriad mystical threats… and it doesn’t have the tools to deal with them. Some people are turning to the old ways in the hopes of finding effective weapons, but this often ends up creating more problems than it solves.

So magic exists in this world… but at the moment it is more threat than a positive tool. This ties to the fact that mystery is a big part of what drives the story of Phoenix. There is an underlying logic to magic… but the people of the Empire don’t understand it. There is an explanation for the Dread, something  that can explain why this is happening and how these diverse threats relate to one another… but you’ll only be able to piece it together by facing these dangers head-on. As of three years ago, Phoenixes were a thing of legend. Now you are a Phoenix and can face the forces of the Dread. But there is still much you don’t know about the Phoenixes themselves. As a Phoenix, you can respond swiftly to threats. You can be dropped into danger with enough time to face the challenge. But merely defeating a monster won’t solve your problems. Simply putting out a fire won’t help if you don’t understand why the fire began, or even what fire is.

This is part of what drives the story of Phoenix. It’s not simply about the action, about what sacrifices you’ll have to make to overcome the terrifying threats you face. It’s a question of whether you can unlock ancient mysteries in the process… whether you can learn the rules of magic and the secrets of the Dread.

Unlike the Mourning in Eberron, in Phoenix there are answers to these questions. The nature of magic and the origin of the Dread are critical parts of the setting. With that said, I am a firm believer in the idea that a setting should inspire stories rather than restrict them. The Marshal’s Guide provides an in-depth exploration of the world and its secrets… but it will also provide ideas and hooks for diverging from the core story and making the setting your own. We’ll provide you with everything you need to play with no effort at all, but we’ll also give you the tools you need to create your own stories and to take things in different directions.

One of the constant questions of world design is How much is too much? When you’re delving into history and geography, how deep should you go? Should you come up with a list of ruling families stretching back a thousand years? How many cities and countries should you create? My answer is always to look at the idea you’re working on and to see if you can think of three interesting stories that you could build from that element. Whether you’re creating fiction, an MMORPG or a pen-and-paper campaign for friends, can you think of any way that a particular idea could be important to your final audience? Could there ever be a reason a player/reader will need to know about that list of ruling families – a mystery hidden in the past or a bitter vendetta – or are you just filling a page with details no one will ever need? Looking to cities and villages, I don’t want to put every single settlement on a map, because I always want there to be space for a gamemaster to add something new if their story demands it. I want to make sure I provide enough concrete points to for a GM to work with… but I also like to leave space for the unexpected. Likewise, adding in dozens of countries or cities often means quantity at the expense of depth. Phoenix is a small and focused world, a play where we explore a few regions in depth instead of spreading ourselves thin. With that said, people often assume that “The Empire” is a bland, monolithic force. In truth, the Empire is largely just an idea. Long ago the first Phoenixes conquered the nations of the Known World and established the Empire. But in practice Phoenix rule didn’t last long before civil war drove the Phoenixes from power and into the realm of legend. The Empire has long been a loose alliance at best, and each province is culturally unique. As a Phoenix, one of the long-term questions you need to face is the role Phoenixes should play in the world… whether you will follow in the footsteps of your ancient predecessors and seek to rebuild the Empire of old, or whether you want the new generation of Phoenixes to walk a different path.

I could fill a book with more information about the world of Phoenix… and I plan to! For now, the critical things to know are that magic is a powerful force in the world, but one that’s largely a mystery to the people of the present day; that the world is facing an existential threat whose origins and nature are largely a mystery; and that you are a mystically empowered champion, but there’s still much you don’t know about your own potential and the origin of your power, let alone the nature of the Dread. Phoenix is a game of action where you will be thrown in harm’s way to protect the innocent. But it is also a game of discovery… and unlocking the secrets of the world is part of the fun.