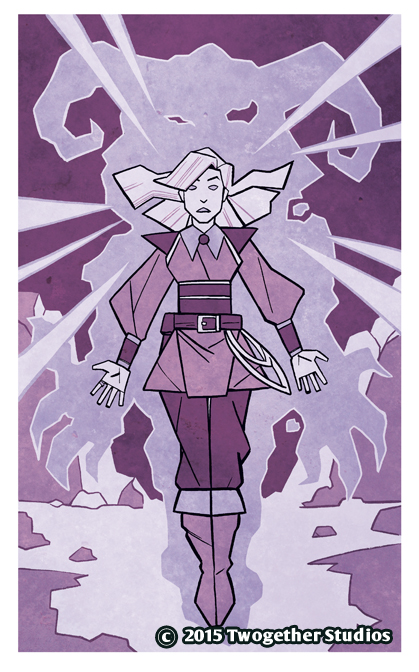 I’ve always been fascinated by dreams and the idea of dreams intersecting with reality. The first piece of RPG work I had published was “Dreaming on the Verge of Strife” in Forgotten Lives by Atlas Games (a sourcebook for the RPG Over The Edge). This piece introduced a conspiracy of people who had no dreams of their own, instead inhabiting the dreams of others when they slept and engaging in subliminal manipulation… essentially Inception, though predating it by a decade. Following that I developed an MMORPG called VR1 Crossroads, a game about warring conspiracies fighting over an intersection between dream and reality. I first explored this idea in the d20 system with my section on Oneiromancy in Occult Lore. When I created Eberron I presented the plane of Dal Quor as the place where mortal spirits go when they dream… along with the Dreaming Dark and the Quori, the malevolent native spirits of that plane.

VR1 Crossroads was cancelled in beta due to Dilbertesque office politics. Eberron is currently in limbo, though I hope this is only temporary. And so I’ve started my own company Twogether Studios and I’m finally creating a game and world entirely of my own… Phoenix: Dawn Command. The connection between dreams and reality isn’t so clear-cut in Phoenix as in those other games, and yet the influence is still there. Phoenix is set in a world where nightmares are becoming real, and it is up to you to learn why this is happening and how it can be stopped. And of course Phoenix itself is a dream of mine – a new setting that I can support as fully as time and interest allow. As I write this, we’re very close to funding the project: I hope you’ll check it out.

But Phoenix isn’t the only card-driven game on Kickstarter I’m working on this month! I’m proud to say that I’m one of the guest writers on Apocrypha, in line to write the – surprise! – Book of the Dreamer memories. Here’s Mike Selinker’s overview of the Book…

The Book of the Dreamers introduces the Novem Nebuchadnezzar, whose sorcerers are unlocking their subconsciousnesses and loosing them on the world. What you see as nightmares, they see as weapons. When you are asleep, they mess with your brain; when you are awake, your brain messes with your reality. But it is Nebuchadnezzar’s dreams that are the most concerning. When he dreams of gold, the price of gold goes up. When he dreams of massive trees, forests tend to come down. So don’t sleep, and you’ve got a chance.

Mike Selinker is one of the most brilliant designers I’ve had a chance to work with, and Apocrypha is an epic project with an amazing team behind it… and I love any chance to explore the influence of dreams on a setting.

Apocrypha and Phoenix are very different products (something Mike and I discussed on the Side Project podcast). Phoenix is a story-driven RPG. It relies on a GM to create the foundation of a story and to fill in the empty spaces of the world – to control the challenges, describe the surroundings and play all the roles aside from those of the player characters. It uses cards in place of dice to determine whether a player can succeed at an action, and this provides players with a degree of narrative control over the story. By contrast, Apocrypha is a game where the cards shape the story and the world. You don’t need a GM, and you use dice to determine if your actions succeed or fail. Apocrypha is a game you could play by yourself, while Phoenix is driven by a story you create together. Beyond that, Apocrypha is set in the modern day in a disturbing reflection of the world we know… while Phoenix is a world of swords and sorcery, which we’ll continue to develop over time. While they are both games about supernatural conflict and both use cards, they are very different games.

I hope you’ll take a look at both Phoenix and Apocrypha – I’m excited to be working on both of them!

And if you act quickly, you can catch Mike and the Loneshark team on Reddit doing an IAMA interview (starting at 12:30 PST on 4/22/15)!