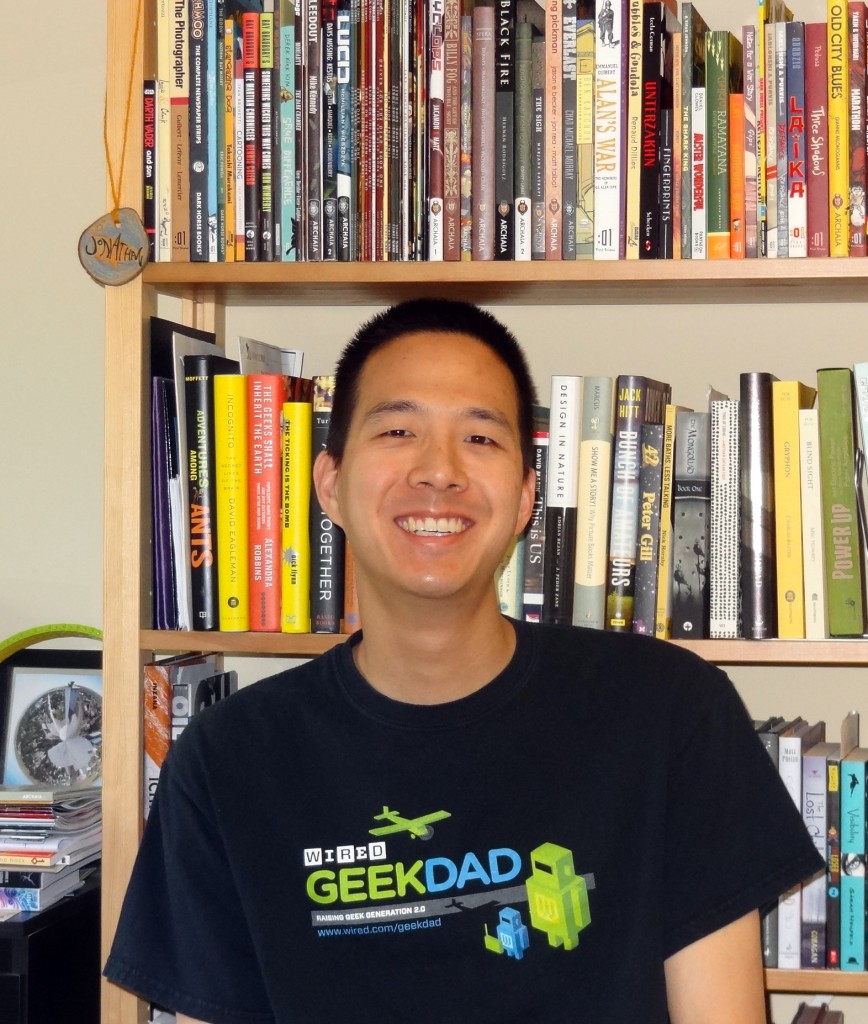 I met JONATHAN LIU while working on The Doom That Came To Atlantic City. Jonathan writes for Wired’s GeekDad blog,which examines everything from games to stellar phenomena – after all, when is the best time to tell your children about the inevitable heat death of the universe? Recently Jonathan put up a Kickstarter for a game of his own… a Kickstarter that’s slightly unusual in that he warns you to think twice about supporting it.

So Jonathan… What’s your secret origin? How did you get to be the geek… and dad… you are today?

Well, I read a lot as a kid. That’s probably the biggest contribution to my geekiness; that and ’80s cartoons. I didn’t grow up playing D&D because it wasn’t allowed, but I did make up my own “mazes” on graph paper and led my friends through them. They were based entirely on my own very limited knowledge of what RPGs actually involved. Fast forward to a few years ago, and a friend introduced me to Settlers of Catan and Carcassonne, and I was hooked. I dove into the world of modern board games and haven’t looked back.

As for the “dad” part: I’ve been a dad for just over nine years now. When we first moved to Portland for my wife’s residency, I quit my job(s) and had about six months to prepare to be a full-time dad and house-husband. I’ve been doing it ever since, and it’s a great gig. We’ve got two daughters now and a third one on the way.

Tell me about GeekDad. What does “Geek” mean to you? What are your goals with the blog?

For me, being a geek means being really passionate about things. Sometimes that means taking things a little too far or a little too seriously, but a geek loves to dig into things and explore the world. I personally tend to have broad interests rather than deep interests, which may be less “typically” geeky. I like a little taste of everything, but it means that on any given topic I may not be as informed as others. It’s that whole Jack-of-all-trades thing.

GeekDad has been a really fun way to share my passions, particularly books and board games. I could talk about those two topics forever, it seems. When I joined the GeekDad team I hadn’t seen a lot of board game coverage on the site already, and I’m very pleased to have added board game coverage as a pretty regular part of the site now. What I love about GeekDad is that, beyond being a blog, it’s a community of geeky parents that I’ve gotten to know both online and in real life. I love being able to share with both them and our readers things that I think are really cool. While I do cover releases from major publishers, I also love having a platform to highlight lesser-known projects by people who don’t have a huge marketing budget and name recognition.

As a reviewer for GeekDad, you’ve played more games than I can shake a stick at. You introduced me to Geistes Blitz and Flowerfall. What are a few of your favorite games?

I’m always hesitant to pick favorites, because there are SO many that I enjoy. But for the past few years I’ve tried to compile lists (with the help of my fellow GeekDad writers) of our favorites reviewed on the site. A few of my favorites from the past few years are Catacombs, which combines a dungeon crawl with a disc-flicking dexterity game; and Escape, a real-time cooperative game about getting out of a cursed temple before it collapses. For thematic “Ameritrash” games, my favorite is the Last Night on Earth series, and for multi-hour Eurostyle, I’d probably go with Agricola. And Carcassonne, one of the games that re-ignited my interest in board games, is still one that I play the most, albeit on the iPad usually.

Here’s a few of GeekDad’s best of lists…

As a Geek DAD, what do you look for in a game? What are some games that you like as a Geek, but fail the test as a dad?

Well, my kids are 9 and 6 now, and that three years can make a big difference in the sorts of games they can play. For instance, the 6 year old is still working on reading but the 9 year old has no trouble with it. On the other hand, we’ve found that my younger daughter is pretty good at basic arithmetic and can keep up with her sister there. For my kids I’m usually looking for games that have a shorter rulebook, something that I can explain quickly so we can get down to playing, rather than a long list of details—they love playing games, but they’ll lose interest in a long explanation.

I also love cooperative games with kids—it teaches a different type of gameplay. I do think it’s important for kids to learn not to take competition personally, but with younger kids it’s harder to separate the gameplay from the non-game relationship. (Heck, it’s hard for some adults, too.) Cooperative games let everyone play to win without bashing the other players, which can be really refreshing for family games.

I think playing games can be educational in itself, so I don’t feel that a game has to be overtly “educational” to have value. Certainly I don’t mind if there’s a bit of math and reading involved, but games that are marketed as educational are often more like flash cards or trivia questions with a thin veneer of game. I’d rather play things that are fun, and then figure out what lessons arise from the gameplay.

As for things that I like that don’t pass the dad test … honestly I think for the most part it’s just a matter of waiting until the kids are old enough to appreciate the game or when I feel they can handle a particular theme. For instance, I’m not going to play as many games that have a lot of backstabbing and “take that” because they’re not quite mature enough for that yet. But when I see that they can be good sports about it, then I’ll break those out. Likewise, they don’t mind games with some monsters (like Castle Panic, for instance) but the more realistically-depicted they are the less they enjoy them. While they don’t mind a zombie-themed game like Zombie Dice, Last Night on Earth would freak them out because of all the photos in the game.

You don’t just play games, you’re making one. You’re running a Kickstarter for a game called Emperor’s New Clothes. What’s the game about? Why should I lay my money down?

The game is based on the classic Hans Christian Andersen tale, about a vain Emperor who gets fooled by a couple of swindlers. Eventually the entire town is roped into the hoax, pretending to see something that isn’t there, until a child points out that the Emperor, in fact, has no clothes. I wanted to create a game that paralleled the story, one that incorporates a scam that works because other players agree to play along. Although it’s not exactly a role-playing game, it does rely heavily on storytelling and imagination rather than being simply a matter of rolling dice and playing cards. Our gimmick is our special printing process, Regulated Optical Operator Screenprinting (ROOS), which makes the game appear invisible to those who probably won’t enjoy the game. Thus, the game is sort of self-selecting: players who can see the ROOS to play the game will enjoy it; players who can’t see the ROOS can ignore it.

For that reason, my Kickstarter campaign is rare in that I’m not encouraging everyone to pledge for it. I want everyone to check it out, and then see for themselves if the game is right for them. If it looks blank to you in the photos, then it will most likely look blank to you when it arrives, so you should probably hold off. However, if you enjoy the photos of the game and gameplay video, then you’ll probably have a very good time playing the game. 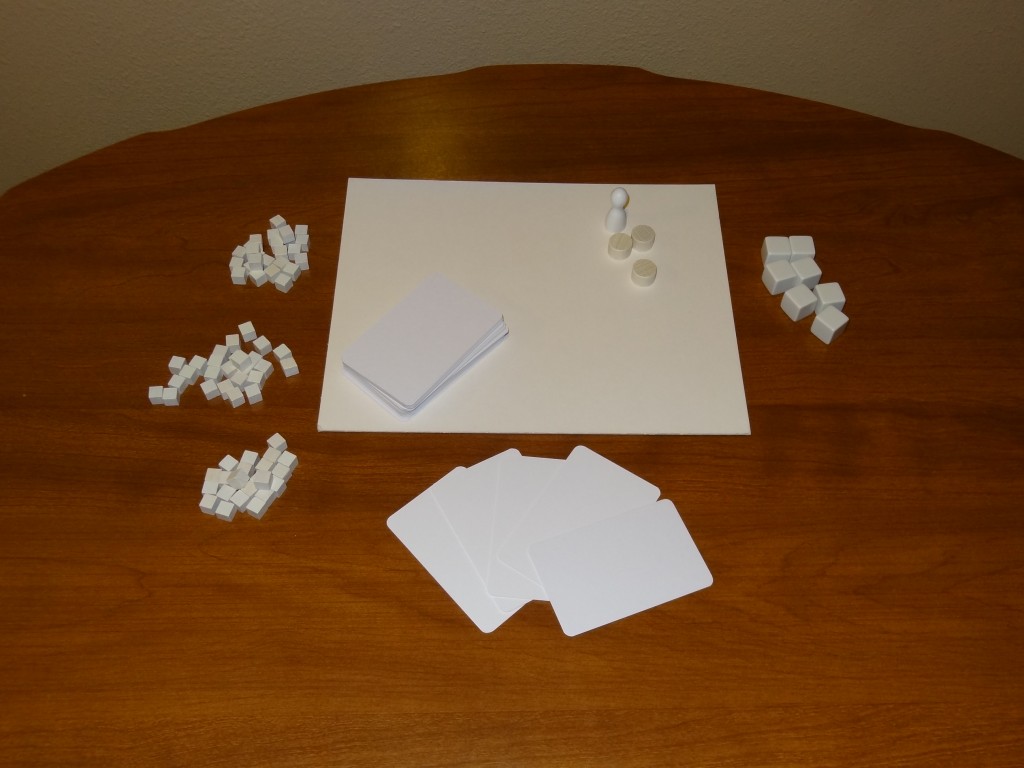 I’m looking forward to the end of the emotional roller coaster that is a Kickstarter campaign! I’m also excited about (in no particular order): the upcoming birth of our third child, my first trip to Gen Con, and finding time to actually play all of these Kickstarter-funded board games that are starting to show up on my doorstep.