In 2009 I wandered around the world playing games in exchange for a place to stay. One of my goals was to meet gamers from as many different places and walks of life as possible… to break the stereotypes of the gamer and find out what drew different people to the table. I stayed with students, strippers, executives, prison guards, teachers, soldiers, and more. It was a fascinating experience, and I wrote about a few of my stops for The Escapist. Eventually, however, the real world caught up with me. It was a cheap way to see the world, but not a free one; sooner or later I had to settle down and get back to work.

In December 2013 my wife Jennifer Ellis gave me an amazing gift: a gumball machine of dice. However, there’s still space in the machine, and that got me thinking. I may not be able to get out to hear people’s gaming stories in person… but perhaps people would be willing to share. So I posted a request, asking people to help me fill the machine by sending a die and a story. Who are you? Why do you play? What moments has this die seen? Ed Hurtley was the first to respond. 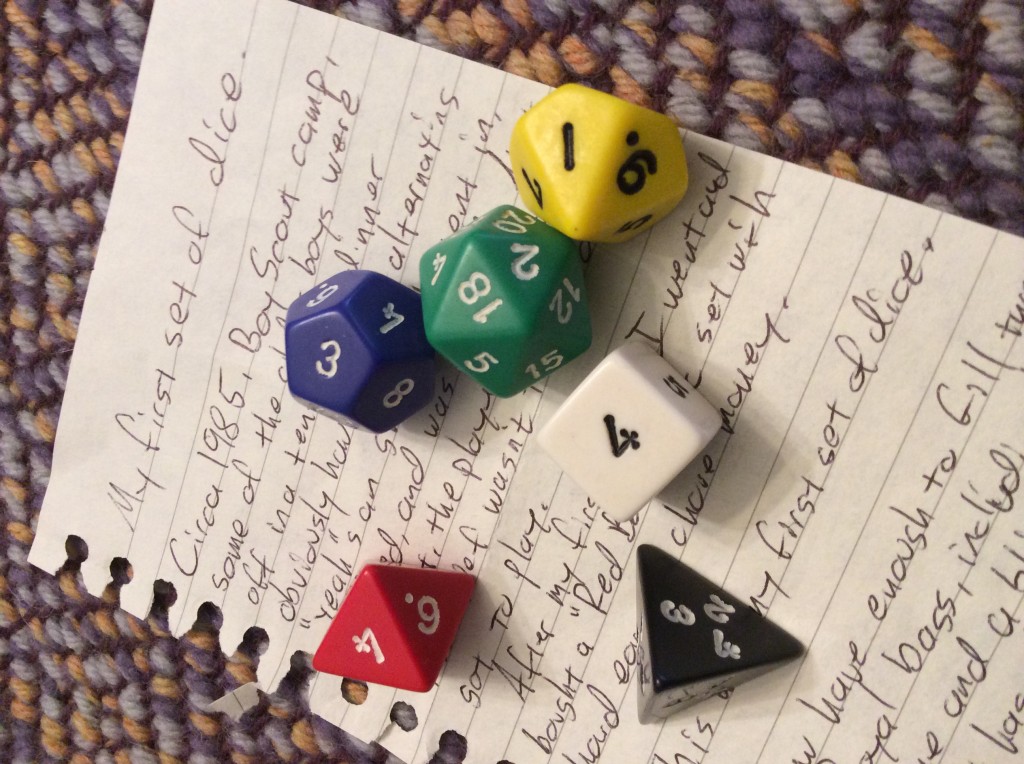 The year was 1985, and Ed Hurtley was a Boy Scout. The Boy Scouts had just instituted the D20 Merit Badges, and Ed needed another level of rogue to get the Multiclass Achievement Badge.

I’m kidding, of course… though you’d think the Boy Scouts might support Pathfinder. There really is a Game Design merit badge, but that’s a relatively recent development. In 1985, Ed had never heard of roleplaying games or D&D. He just knew that some of the older scouts were up to something. He heard shouts of triumph and groans of despair coming from the tent where the boys were gathered. He pushed his way into the tent, watched the game unfold, and he was hooked. Next campout, the kid who usually played the Thief didn’t show up. Ed swears he had nothing to do with this absence, but he took the seat at the table and picked up the dice. He’s been rolling those dice for over twenty-five years. Now he’s got hand-carved stone dice and a twenty-sided that blinks when he rolls a critical hit. He’s got two Crown Royal bags filled with dice. But he’s always kept his first set from his days playing the Red Box, and those are the dice he gave to me.

Ed was born in Portland, Oregon and he still lives there today. As a Boy Scout (and a Thief) he thought he’d grow up to be an aerospace engineer or an Air Force pilot, but along the way he discovered that he knew how to use computers and that people would pay him to do it; he dove into the world of Tech Support and has been living there ever since. He collects vintage computers, and has nearly a hundred different systems in his collection; his daughter loves playing Apple II games. He’s still playing in a regular weekly RPG group, bouncing around between D&D, Rifts, Pathfinder, and other systems. He’s been playing with three of the people in that group for nearly fifteen years.

That’s one thing I found when I was traveling around the world: gaming is something that holds people together. Back in 2009, my Scottish host John McLintock said that what he loved about gaming was that it created a “personal mythology” – a shared set of stories that his friends still told decades later. What I love most about roleplaying is the collaborative aspect of it. It’s a story I create with my friends, and even when I’m the game master I don’t know how it will end.

I’d like to thank Ed and everyone who’s shared a story or rolled some dice with me. If you or someone you know would like to take part in Stories & Dice, my address is PO Box 13250, Portland OR 97213. Please include your email address so I can follow up with you! You can also catch me at a convention, though I don’t have anything scheduled for the next few months.

Thanks for reading, and I hope I’ll hear your story soon.