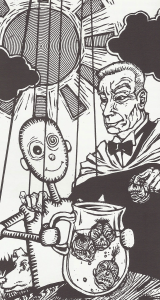 From high school on, I knew I wanted to write roleplaying games. What I didn’t know was how to get that job. In 1997 I responded to an open call online… Atlas Games was looking for submissions for Forgotten Lives, a collection of adventures for Jonathan Tweet’s Over The Edge. I submitted a piece called “Dreaming On The Verge Of Strife”, about conspiracies that only exist in peoples’ dreams… a theme I’d later revisit in Eberron with the Dreaming Dark. The image above is one of Grey Thornberry’s pieces from “Dreaming…” My friend Lee Moyer and I collaborated on a host of ideas for the next OTE anthology, a collection of businesses called At Your Service. “The Rose Hotel” is one of my favorite creations, and a scenario I still enjoy running today.

Why am I bringing this up now? Because there’s never been a better time for you to explore Over The Edge. For the next nine days, the Bundle of Holding is offering a comprehensive collection of DRM-free Over The Edge PDFs. For $5.95 you get the rulebook, player’s guide, and a novel by Robin D. Laws. If you beat the average price, you get a stack of supplements, including Forgotten Lives and At Your Service.

What is Over The Edge? The tagline is “The roleplaying game of surreal danger.” Set in roughly modern day, it’s based on the bizarre island of Al Amarja – a haven for all manner of conspiracies and curiosities. Mash together Fringe, The Twilight Zone, Naked Lunch, Illuminati and Fear And Loathing In Las Vegas and you’ve got something that tastes like Al Amarja. It’s got a simple rules system that encourages creativity and can handle almost any character you can come up with; I’d describe it in more detail, but hey, for six dollars you can see for yourself. Because of the flexibility of setting and system, it can support many different playstyles. I’ve had players who played simple, serious characters – the secret agent on a mission, the reporter determined to get the Big Story, the local gamer who knows everybody. Others drifted slightly further from the beaten path… a Kaiju trapped in a human body; a cowboy abducted by aliens and dropped off in the present day; Kurt Cobain seen through the lens of Six-String Samurai; Phil Lovecraft, private eye. And then there’s been some very odd characters, such as Zombie Jesus and Five Ducks In A Battlesuit. The beauty of Over The Edge is that the system handles all these concepts with ease – and that the setting can encompass all of them. Over The Edge also includes one of my favorite game mechanics of all time – Robin D. Law’s Cut-Ups Method, included in the Weather The Cuckoo Likes supplement.

Whenever I prepare an Over The Edge adventure, I like to provide the players with the latest issue of Al Amarja Today (something suggested in the rules). Here’s an example… 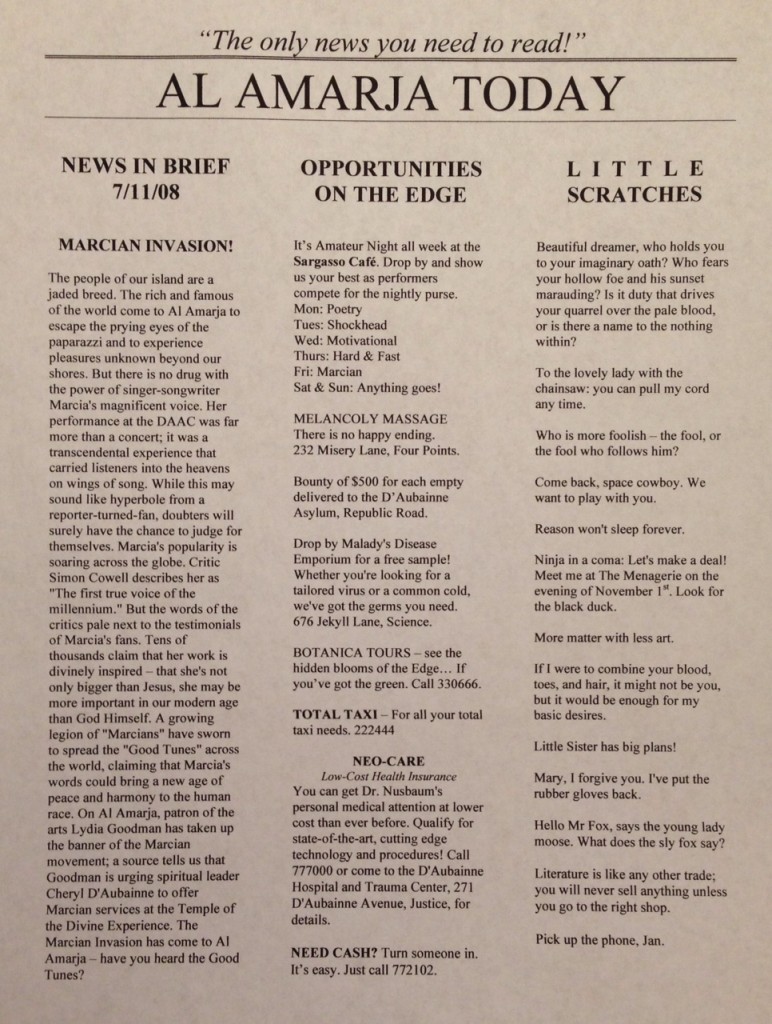 To put things in perspective, one of the PCs in the campaign was Jan Brady: Ninja. No one pays attention to Jan Brady… so when she grew up, she put that talent to use as a professional ninja. Of course she continues to be overshadowed by her sister Marcia, who is not only a musical superstar but also a better ninja than Jan. This ties to one of ways OTE influenced Eberron. While the game provides all sort of details about the setting, it encourages you to pick and choose what you want – and to change things to fit your game. In “canon” Over The Edge, the beloved singer-songwriter with the Good Tunes is Karla Sommers. When my friend came to me with the idea of playing Jan, I just changed “Karla” to “Marcia”. It gave me a host of material to work with, but now completely revolving around the PC. That attitude to “canon” – something to serve as a starting point and source of inspiration, not something that limits the game – directly influenced my approach to Eberron.

Anyhow: Over The Edge has long been one of my favorite RPGs, and The Bundle of Holding is a fantastic opportunity to pick it up. So check it out!