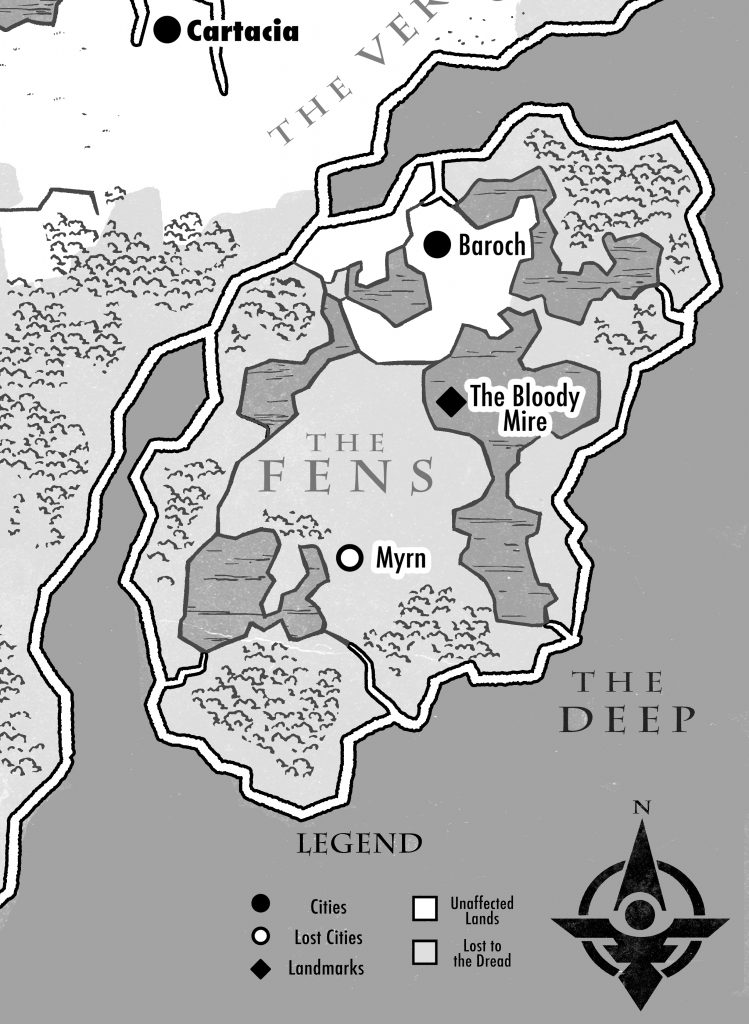 The preceding material deals with the basic culture and geography of the Fens — information a player needs to make a Phoenix from the region. All of that material can be useful to you if you’re developing a mission in the Fens, but let’s take a closer look at the story potential of the region.

In making plans for the Fens, a first step is to consider Aeries. Myrn and Baroch both contain Aeries, but Myrn’s is certainly lost and it’s likely that the Baroch Aerie was shut down and heavily vandalized following the Civil War. You could chose to have the Aerie already restored, though the relationship between the people of Baroch and the Aerie staff would likely be strained. Alternately, restoring the Baroch Aerie could be an interesting challenge for a group of Phoenixes: escorting a Flamekeeper to the troubled city, reclaiming the repurposed Aerie, and winning sufficient respect from the locals to ensure that they’ll allow it to remain open would be a few of the challenges the Phoenixes would face. It’s up to you to decide if there are any other Aeries in the region. If so, it’s likely because a place was especially close to the Dusk or otherwise perceived to be especially dangerous… why is that?

The Fens are part of Ilona, and have ties to the traditions found elsewhere in Ilona — notably the Talu families and the House Gods. However, the Fenfolk have clung to their House Gods long after most of the Empire has let them go. The bond beasts are a lesser form of this devotion. These could be worked into story in a number of ways…

If you do want to use a House God (GftNIM p. 205), the Fens are an excellent place for it to happen. The Talu have been hoping their gods would return… now one could manifest, claiming the body of a Talu heir. Consider the following ideas.

Bond-spirits and House Gods are just a few of the potential dangers Phoenixes could face in the Fens. Hatred and old violence have seeped into the roots of the Fens, and the deep http://www.slaterpharmacy.com/ shadows of the swamp are an excellent place for restless dead. Bones are a simple answer; consider a few possibilities.

Aside from the bond-spirits and the unquiet dead, there is another force that could be at work in the Fens: The Anima (GftNIM p. 165). This seeks to defeat the Dread by creating new forms of life that can survive it. Its creations could be mistaken for bond beasts, even though they have no tie to spirits or the past; or you could see massive river serpents rising up from the waters, immune to the Dread but posing a terrible threat to all the humans in their way.

This raises one final question: What happened to the city of Myrn? The city was lost and its people slain… or so we assume. Consider a few possibilities…

Phoenixes could come to Myrn in search of survivors, but they could also be sent to Myrn to find something vital that was lost. Myrn was the second largest city in the Fens. One of the Marshals could be from the Fens, and need some personal relic recovered from the area. It could be the waters of Myr’s Well are required for an important ritual on Pyre, or that a vitally important mortal was last seen in the city. Whatever the reason, it’s a major city whose people were suddenly lost, and any number of valuable things could remain within.

Next week I’ll add a section about how to incorporate the Fens into Eberron. Until then, I hope this has given you ideas!