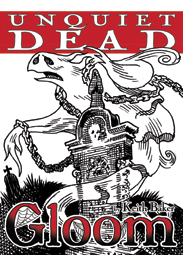 The last few weeks have been tied up with The Doom That Came To Atlantic City, but I have other projects in the works. Soon I want to start talking about the new RPG I’m working on, but today I wanted to talk about the next Gloom expansion: Unquiet Dead.

For anyone who’s not familiar with it, Gloom is a transparent card game in which you control a family of eccentric characters. You’re trying to construct the saddest story possible, and as such your goal is lead your family to misery and death while keeping your opponents happy, healthy and alive. You can see Gloom in action in this episode of Wil Wheaton’s Tabletop – or in this video, featuring Molly Lewis, The Doubleclicks, and me!

The original Gloom features the Slogar family, including Lord “brain-in-a-box” Slogar and his cadaverous daughter Melissa. Unquiet Dead expands on this and pulls ghosts, ghouls, mad scientists and all manner of other spooks into the spotlight. Perhaps you’ll be confined in a coffin, have to hide from Hyde, or have a full honeymoon after you’re Wed to a Werewolf. But what are a few of the things that really make this expansion stand out? 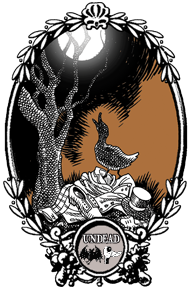 Unquiet Dead includes a number of “Undead Modifiers.” These are similar to the transformations of Cthulhu Gloom – modifiers that actually replace the central image of your character with a new picture. This means that the effects of the card stay with you even after the text is covered. So if you look at “Woke up as a Wereduck” above, you’ll see that it says “Undead; Beast, Duck”. Once you become a wereduck, you are ALWAYS considered to have the Beast and Duck story icons… and you’re undead.

Undead characters are considered to be both alive and dead. They count towards ending the game and count towards your score… but they remain active, and you can continue to play Modifiers and Events on them. This can be both a blessing and a curse; you can make things worse for your wereduck, but your opponents can continue to cheer you up. No one ever said a vampire couldn’t find true love! Or sell the movie rights to the story! And speaking of stories…

Stories give your families something new to fight over. A Story is a card that starts in the middle of the table. To claim a story, you need to have a certain number of a particular story icon in your family. So after once of your characters is Perturbed By The Pudding and another is Sickened By Salmon, you find yourself with two Goblet icons. That lets you claim to the “Icebox of Doctor Caligari” Story – and you keep it until another player has more Goblets than you do. As long as it’s in your possession, it provides you with a useful ongoing ability. So Stories give you a reason to push your family in a particular direction – and the back and forth of trying to keep your opponents from stealing your Story adds a fun twist.

In classic Gloom, many Untimely Deaths provide a bonus if the dead character has a particular Story icon. A character who’s Sickened By Salmon loses an extra ten points if he Chokes on a Bone as opposed to being Burnt By A Mob… because the original tale dealt with food, and the death logically follows. Unquiet Dead continues this approach, but now you can get a wider range of bonuses from matching deaths to the logical characters. For example, if you happened to be Worrying About Wolves before being Run Down By The Pack, you’ll have an opportunity to kill an additional character; and if your character is already wealthy when she Took It With Her, your draw limit could be increased by one for the rest of the game.

Unquiet Dead comes out in October 2013, but if you catch me at an upcoming convention (Wizard World Chicago, Gen Con, Dragon*Con) you might have an opportunity to try it out early! Until then, check out more of the Undead modifiers in Atlas Games’ latest preview. 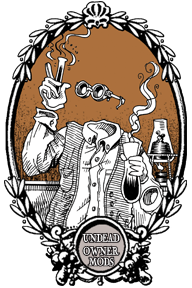