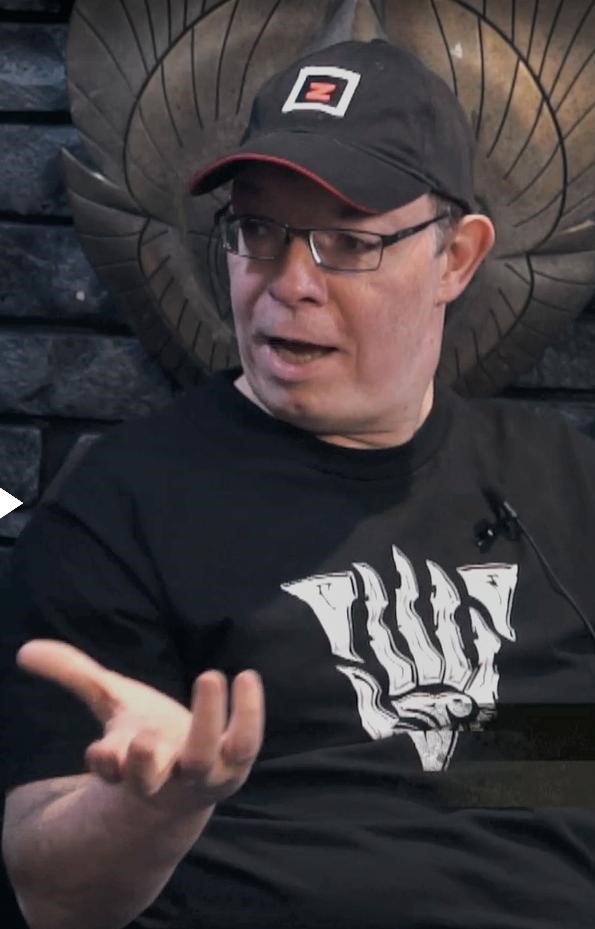 Mickey Redblade was sharpening a dagger when she walked in. She was three feet of trouble – the most beautiful halfling he’d ever seen. But Mickey could see it in her eyes. She was in danger.

On a rooftop overlooking Redblade Investigations, Tyras “Deadshot” Dondarael assembled his sniper’s rod of seven parts. He’d seen the princess entering the building. Now he had to make sure she didn’t leave – alive.

Eberron didn’t start out as Eberron. In 2002 Wizards of the Coast announced the Fantasy Setting Search, an open call to find the next setting for Dungeons & Dragons. I was a lifelong D&D fan, and I was doing freelance work for Atlas Games, Goodman Games, and a number of other small publishers—but I never imagined an opportunity like this one. I submitted a number of ideas. My favorite was called Thrilling Tales of Swords and Sorcery. It incorporated themes of pulp adventure and film noir, along with the idea of magic evolving as part of society. The story above is from the original one-page submission. It was a fun idea and a world *I* wanted to explore… but I never imagined that it would eventually become one of the official worlds of Dungeons & Dragons.

Of course, Thrilling Tales wasn’t Eberron. It went through four stages of development. First there was the original one page concept, which went up against thousands of others. The next step was expanding that into ten pages, fleshing out the core idea. From there I wrote a hundred page story bible. But even then, it was still Thrilling Tales of Swords and Sorcery.

Once Thrilling Tales was chosen as the final setting, I went to Seattle and spent weeks working with an amazing team of people at Wizards of the Coast: Bill Slavicsek, Chris Perkins, James Wyatt, and many others. Together we isolated the best parts of Thrilling Tales, as well as identifying the elements that didn’t work and finding ways to improve them. You know what’s more exciting than nomadic halflings? Nomadic halflings riding dinosaurs. We took the idea of dragonmarks and made the Dragonmarked Houses. The Last War, the Undying Court, the Mourning, the Church of the Silver Flame—these are all things that we built together. This was one of the most amazing creative experiences of my professional career, and it was this team that created the world as you know it… and it was Bill Slavicsek who named the world Eberron.

Despite being part of Eberron from the very beginning, there are things I’ve never known. What inspired WotC to hold the Fantasy Setting Search in the first place? What was it that people liked about Thrilling Tales? Bill Slavicsek is currently the lead writer for the Elder Scrolls Online, but he took a little time to reach back into the past and discuss the origins of Eberron.

How did the Fantasy Setting Search come about?

Wizards of the Coast had an unprecedented success with the release of Dungeons & Dragons 3rd Edition in 2000. We used the Greyhawk setting as the default in the core rulebooks, and we released a new edition of Forgotten Realms in 2001, but both Brand and R&D wanted to create something new. The Brand Team came up with the idea to open the search for a new setting to everyone—fans and professionals alike. So we launched the Fantasy Setting Search in 2002. We assumed we’d get a good response to our call for one-page submissions, but we never expected the deluge we received. Our offices were inundated with more than ten thousand submissions! I was the Director of R&D for Dungeons & Dragons at the time, and a member of the committee charged with reviewing and ultimately selecting the new campaign setting. The committee, which included members of WotC’s R&D, Brand, Marketing, and Sales teams, had originally hoped to have every member review every submission we received, but the sheer volume made that impossible. Instead, we divided the submissions among the various committee members and directed each one to bring the ten most-promising entries from their piles to the ongoing committee meetings for discussion.

Eberron emerged from the Fantasy Setting Search. Originally, the setting was simply called Thrilling Tales of Swords & Sorcery. Thousands of worlds were submitted to the search; what did you find appealing about this one?

Interestingly enough, Thrilling Tales was in my stack of submissions. After reading through the first couple of hundred one-page synopses in my pile, I came to the conclusion that we weren’t going to find the perfect submission. I read various takes on ice worlds and water worlds, worlds where one or more of the D&D races didn’t exist, where magic was more or less prevalent, or where the gods have disappeared. Many of these had interesting bits buried within them, but they all did something I was hoping to avoid—they made parts of the Player’s Handbook, Dungeon Master’s Guide, and Monster Manual unusable. At this point, I focused my efforts on finding a submission with a unique concept, something with a twist and the seed of an idea that I could help grow into a campaign setting worthy to take its place beside the amazing settings that had come before it. The first submission I came across that had that spark of excitement was Thrilling Tales. Even as I winnowed my pile of submissions down to a handful of contenders, I kept coming back to Keith’s proposal. Now, bear in mind, we reviewed each and every submission blind. There were no names attached to them. We wouldn’t find out who wrote what until we selected the three finalists. Remember, I was looking for a submission with a core idea that I could help nurture and grow. Keith’s original one-pager is hardly recognizable as the Eberron Campaign Setting, but if you looked closely enough and opened your imagination, you could see the kernels of Eberron ready to explode upon the page. At least, I could. I loved the idea of building a fantasy world out of the elements of pulp action and noir suspense. Once I convinced the rest of the committee that Thrilling Tales had to be among our three finalists, we were well on the way to making the world that Keith helped me imagine come to fruition.

What appealed to me about Thrilling Tales of Swords & Sorcery? The promise implied by the title, for one thing. The challenge of mixing genres, for another. And, frankly, the sheer freshness of the idea—something that hadn’t yet been tried in D&D. I championed Keith’s entry not because of what it was, but because of what it could become. Now, my team and I worked with all three finalists to help them turn their one-page submissions into hundred-page story bibles, and I was happy with how each of them turned out. But in the end, the setting that was destined to become Eberron was the one that I found to be the most exciting, both from my perspective as a fan and my role as a creative professional. In the end, the first submission to spark my interest and capture my imagination is the one we eventually published. It was a wild and amazing ride from start to finish.

You came up with many of the names used in the world… including Eberron itself. Is there a story to the name “Eberron”?

Names and concepts. Those are kind of my specialty. In fact, the first major RPG product I worked on, The Star Wars Sourcebook, was all about me coming up with names and descriptions and backgrounds for people, places, and things seen briefly in one of the three original Star Wars movies. Once we got Keith into the WotC offices and began the process of turning his one-pager into a publishable campaign setting, my first task was convincing him to take his idea in the direction I was imagining. If I remember the original one-pager correctly, it was somewhat tongue-in-cheek in its approach, a kind of send-up of a private detective story set in a D&D-esque fantasy world. I wanted Keith to embrace that, but to shift the tone to something more serious. I wanted to play the pulp and noir aspects straight. To build a fantasy world influenced by the same events that helped create the pulp stories (which reached their peak in the 1920s and 1930s) and noir tales of the 1940s and 1950s, but with a modern sensibility and an overlay of the fantastic. Keith immediately saw where I wanted to go and ran with the idea, bringing back a story bible that would serve as the basis of the world we would eventually create. As for Eberron, I knew we needed an evocative name for the setting that would look good on a logo, be memorable, and be able to be trademarked without too much fuss and bother. I just worked the word until I was happy with it, then presented it and got it approved by Brand and Sales.

Eberron has come a long way since the original submission. What’s your favorite aspect of the final setting?

Eberron has an interesting pedigree. It started life as a one-pager by Keith Baker, was adopted by myself and Chris Perkins (the project design manager), then shaped and expanded by Keith, me, and James Wyatt. More than words, though, we also utilized the talents of concept artists Dana Knutson, Steve Prescott, and Mark Tedin to help bring the amazing things we were imagining to life. Trying to choose a favorite aspect is like trying to decide which of your pets or children you most cherish. It just can’t be done. But I can narrow it down to a few key elements.

I love how we were able to successfully combine multiple genres along with the core elements of D&D to create a viable and exciting setting that was both new and still profoundly D&D. I love the set-up of the world, from the Five Nations to the Last War. I love the mix of magic and technology, from the Lightning Rail to Elemental Airships, Warforged to Artificers. And I love how that original volume ended up, from the Ten Things You Need to Know to the mix of background material and the presentation of current events that could be used to shape adventures and stories happening in the immediacy of the world. The Blood of Vol, Dragonmarks, the Silver Flame, the Emerald Claw—there’s a lot that stands out in my memory, and I’m extremely proud of what I was able to help Keith and James create almost fifteen years ago.

Have you ever played in or run an Eberron campaign of your own? If so, what was one of your favorite moments?

I ran an Eberron campaign while we were writing the Campaign Setting, utilizing ideas and events at the table to influence my writing. I playtested the original trilogy of adventures during their development. And later, I ran a campaign set in the world just for fun. Probably my favorite moment was an encounter I designed to kick off the campaign. It was designed to showcase the uniqueness of the world and throw the characters right into the action—action that was pure Eberron. It involved a chase through the skies of Sharn, the City of Towers, that took place atop an airship that was under attack by gnolls riding disks of energy. The scene was so evocative that we had Wayne Reynolds illustrate it in his impeccable style and I think we included a version of the encounter in one of those first adventures.

Thanks to all of you who’ve explored Eberron and helped to bring it to life! What do you find appealing about the setting, and what are some of your favorite Eberron moments?

9 thoughts on “The Origins of Eberron: Bill Slavicsek”