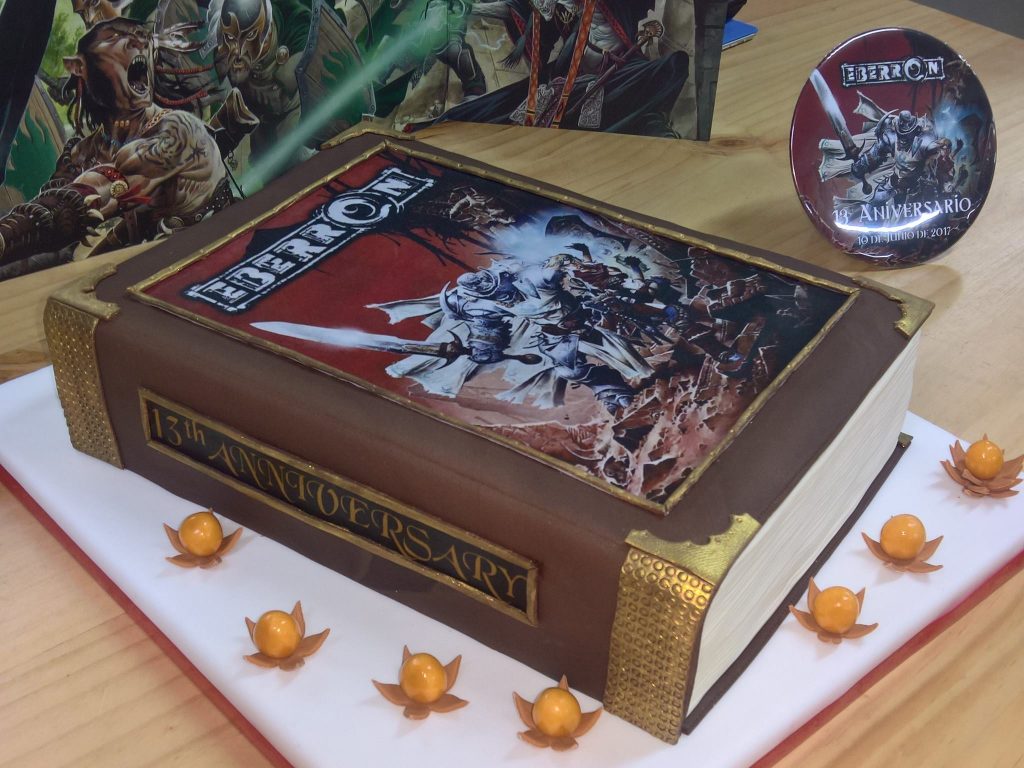 I first began working on Eberron in 2002, but the Eberron Campaign Setting was released in June of 2004. So the setting has just turned thirteen, and anyone who knows Eberron will know that thirteen is a number with special significance. There are thirteen planes, thirteen moons, thirteen dragonmarks… although all too often, one of these thirteen is destroyed or lost. While here in the United States we’re still waiting for Eberron to be unlocked for 5E, a gaming community in Peru organized a month-long Eberron celebration in honor of its 13th anniversary. The tome pictured above is a cake produced for that celebration, and it is one of the most fantastic things I’ve ever seen. 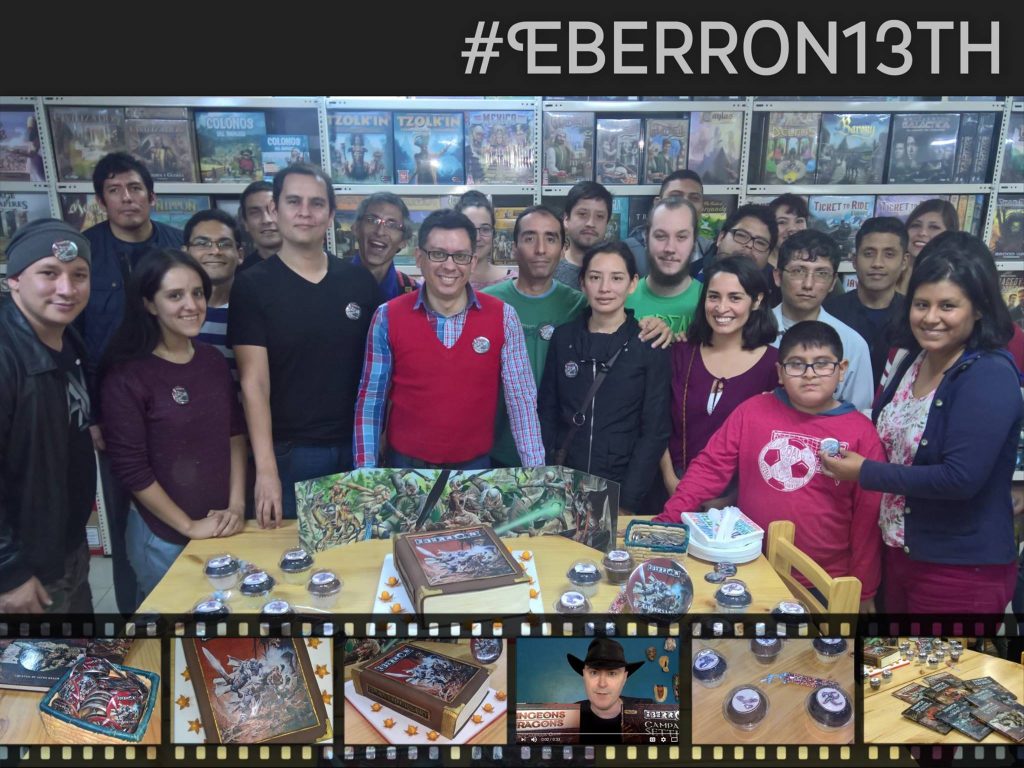 While I couldn’t make it to Peru for the party, I did appear in video form, and I promised to answer a question chosen by the group. I’ll get to that at the end of this post, but before I do I wanted to take a moment to thank all of you who have kept Eberron alive for the past thirteen years. I hope that we will see Eberron officially revived for 5E, but until that time it means a great deal to me that there are still those of you out there who are enjoying the world. My favorite thing about RPGs is the ability to create new stories — and I love that you are out there creating Eberron stories of your own.

At this time, I still have no official news about support for Eberron. I’ll continue to answer questions on this site, but I cannot produce new material here. With this in mind, I am and will be continuing to produce new setting material for my own RPG, Phoenix: Dawn Command. Even if you don’t play Phoenix, my hope is that you may find this material to be useful in your Eberron campaign. The main article I’ve produced is about The Fens, and this follow-up article talks about how you can use the Fens in Eberron.

With that said, there are many people working to keep Eberron alive, and I wanted to call out some of these. I am part of the monthly Manifest Zone podcast; each month we explore a particular aspect of the setting. On Facebook I’m aware of the Eberron Enthusiasts and Sages of Eberron groups, and beyond that The Piazza is the primary Eberron forum I keep an eye on. If you’re into live play, Maze Arcana is a livestream working with Wizards of the Coast, and you can get more Eberron in Role Out.

That’s all I have time to say at the moment, but I’d love to hear more from all of you. What’s your favorite moment from your time with Eberron, or your favorite thing about Eberron itself? What do you want to see in the future?

Meanwhile, here’s the two questions from the party in Peru…

How would you organize a campaign around a party of Dragonmarked characters? What could possibly bring them to work together?

One obvious answer is the thing that brings all the houses together: The Twelve. This organization serves as a sort of United Nations for the Dragonmarked Houses. It exists to mediate grievances and resolve disputes, but also to unite the houses to accomplish things they couldn’t do alone. The Kundarak vault system – which required the talents and marks of House Orien and House Cannith to create – is a prime example of such cooperation. So, a party of adventurers could easily be elite troubleshooters for the Twelve – nominated by each of their individual houses and dispatched by the Twelve to handle problems or investigate opportunities that matter to all of the houses. Just a few examples of things that could fall into this category…

… And that’s all literally off the top of my head. This provides the PCs with an immediate powerful patron that will always be ready with a new assignment. If you want to complicate things, each of the houses the players are personally tied to could have their own agendas, and players could be torn between their own beliefs, the common goals of the Twelve, and the desires of their house.

A completely different approach would be to focus on a party of adventurers who are all excoriates – the EX-Dragonmarks. This could be unjustified – making them the Dragonmarked equivalent of the A-Team – or they could actively opposed the agendas of the houses they are from. They’re united because they are all outsiders, and the question is whether they are trying to redeem themselves and get back into their houses… or whether they are on an ongoing mission to expose corrupt and illegal activities tied to the Houses, whether these reflect the house as a whole or are the work of a small group of corrupt barons.

There’s three ideas – hopefully that’s enough to get you started.

What is the reach of Zilargo? Does the Trust meddle in other nations if Zilargo’s interests are at stake?

Absolutely! In my opinion the Trust is one of THE most efficient espionage agencies in Khorvaire. The Zil have always embraced intrigue and cunning over military power as their primary means for affecting change in the world… and with their natural talents for illusion gnomes can be very efficient spies. The Trust doesn’t have the same degree of power or coverage in the Five Nations that it has in Zilargo, but it’s still very efficient. Likewise, the Trust won’t be as blasé about assassination elsewhere as it can be in Zilargo, but it definitely employs assassination when it has to. One of the most dangerous characters in the Sharn: City of Towers sourcebook is Madra Sil Sarin, one of the Trust’s top assassins. Madra has rings of sustenance and invisibility, and communicates with her superiors via telepathic bonds. As a result, she is a ghost: she spends her life in silence and invisibility, moving unseen through the city while waiting for a telepathic call to action.

While agents like Madra are ready to take direct action when it’s called for. the Trust PREFERS to act indirectly. The Zil maxim is Five words can defeat a thousand swords — and the trick is saying the right five words to the proper people. Just as hacking is becoming an increasing concern in modern politics, Zilargo can manipulate things very effectively simply by revealing secrets in the proper place and time. Does Zilargo support the Brelish monarchy or not? Do they support Kaius of Karrnath, or do they want to see rival warlords bring him down? Do they support the theocracy of Thrane, or might they help the monarchy by revealing evidence of corruption within the church?

But to deal with the question: Yes, Zilargo definitely meddles with other nations if their interests are at stake. However, more often than not they will meddle by exposing secrets… doing so in a way that furthers their own agenda, but at the same time, it’s an action that’s hard to trace to Zil actors.

If you’re dealing with PCs who are Zil agents, the most common thing they will be called upon to do is to acquire information – as secrets are the primary weapons in the Zil arsenal.