Today I’m talking with JOHN KOVALIC. If you don’t know who John is, you are clearly a Cylon spy; please report to the nearest airlock. John has illustrated over a hundred games, including hits like Apples to Apples and Munchkin. His comics include Dork Tower and Doctor Blink: Superhero Shrink. He’s even appeared in The National Enquirer. He is a living legend, at least if it’s a legend about a cartoonist accidentally ending up in an embarrassing story in the Enquirer. But I’ll let him speak for himself. 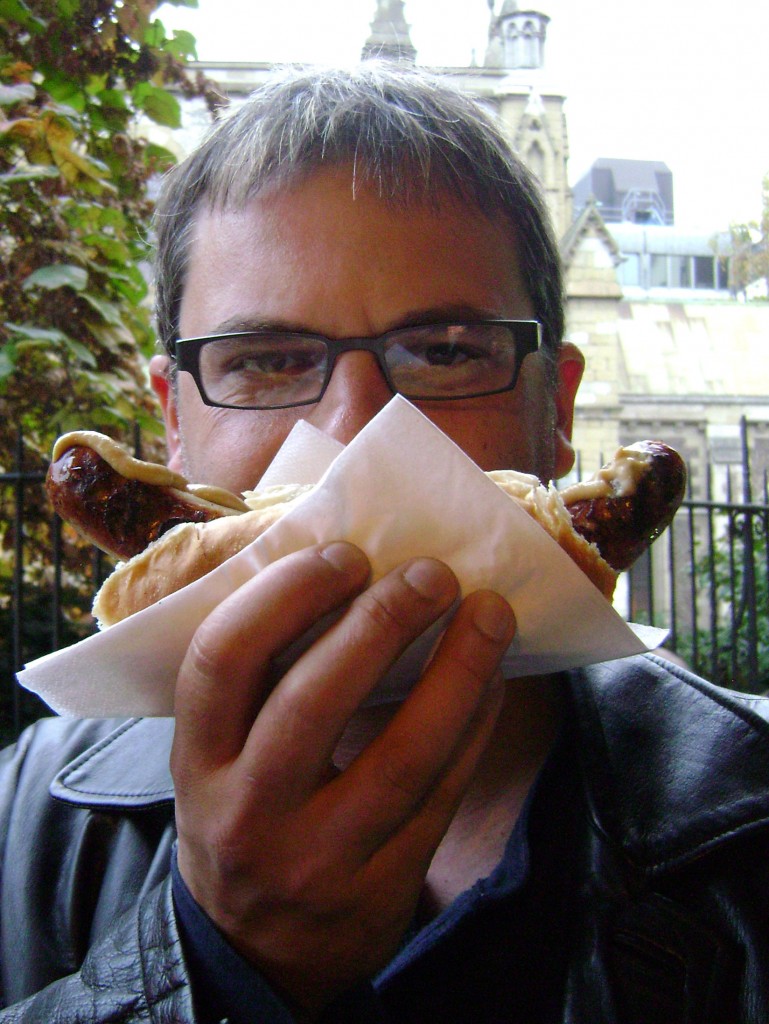 You’ve been producing Dork Tower for over fifteen years. In addition to chronicling the experiences of a community of gamers, Dork Tower has introduced the world to the milliwheaton and revealed the horrifying truth behind Dinosaur Train. How did Dork Tower get started, and how has it changed over the years?

Dork Tower began in 1996, when I was talking with Shadis magazine editor DJ Trindle at GenCon. I’ve been a gamer since the mid-1970s. By the mid-90s, I was working for the Wisconsin State Journal, sneaking in games reviews when I could. I even talked my way into going to GenCon on their dime.

Over the years, Dork Tower changed in about the same way that gaming itself has changed. The characters still represent the same basic Gaming Types that they always have. But their fandoms have grown. Along with mine. I suppose it’s a bit harder, these days, as the basic “Oh my god! GAMERS!” trope has been done to death. But the challenge is enjoyable.

A close friend is moving to McMurdo Station, and the only thing he can take to keep his spirits up are three Dork Tower strips. Which three do you recommend?

Oh, lord. “You have thousands of children. Which is your favorite?” OK. You get the first three off the top of my head, then.

ONE: The “Hey, Marcia! Come and see the Satanist” strip from the early days is one people love, but I always considered the “Are Dark Elves into Leather” strip more of a personal favorite because it defined Igor’s character early on and set the tone for Dork Tower.

TWO: “Matt and Gilly’s Big Date,” from the “Dork Covenant” collection. This won an Origins award, and I’ve always thought it was sort of a sweet little story.

THREE: I’ve been trying different formats out with the online comic strip, recently. And it’s been a lot of fun. If you know what Dinosaur Train is, I’d go with this one. If not, here’s one with “Gilly the Perky Goth on Fake Geek Girls” I was really happy with.

Carson the Muskrat first appeared in Wild Life, the comic you created for the Daily Cardinal. What was the story behind Wild Life, and what’s your personal affinity for muskrats?

Wild Life actually didn’t start in the Cardinal. By the time I got to the UW-Madison, it had already appeared in the Millfield Newspaper, the Queen Mary College- London newspaper and the UW-Parkside Ranger. After I graduated from the UW, it went on to run in the Wisconsin State Journal in the late 80s, and was picked up for national syndication by Chronicle Features in the early 90s.

My mom had written a comic strip for a kids’ paper back in the States called My Weekly Reader. I’d grown up on comics and learned to read with comic books. I was always sketching, and writing comics in the back of my school notebooks. When we moved back to England, I just decided to show these to the school newspaper, as it seemed the sort of thing a cartoonist should do. School newspapers are seldom picky, and the rest is history.

Little-known fact: “Wild Life” was named after the old Wings album of the same name. I’ve no idea why I did this: it’s not a favorite album by any means. The 1970s were odd.

As to why a muskrat, I also have no idea. In the early days, Carson looked more like a badly-drawn sheep. “Muskrat” sounded funny, though. I finally saw a muskrat when I moved to Wisconsin. It is hugely inconvenient of them not to look like Carson at all.

Another little-known fact: Carson is named after Johnny Carson. Nobody ever asks that, anymore, as “Carson” seems to have become a common first name, possibly after entire generations named their kids after the Tonight Show host. But there you have it.

You’ve created the art for dozens of games, from Apples to Apples and Munchkin to Kobolds Ate My Baby! What was the first game you ever played? What do you enjoy playing today?

My first real gaming love was when I was in England. School friends played World War II wargames with 1/72nd scale Airfix kits and figures, and I was hooked. At a model shop in Bristol, I stumbled across a copy of SPI’s Panzer 44. That called to me immediately and I was soon seeking out all sorts of wargames. It was on a trip to Games Workshop – then a small general gaming store in London – that I discovered the fabled Little White Box set of Dungeons and Dragons.

I try and play as much as I can, but the traditional wargames get the shortest shrift anymore: I simply don’t have time for them. As far as roleplaying goes, I think Pathfinder is magnificent (thus the upcoming Munchkin Pathfinder fills me with fanboy glee). But, if I have to be honest, Call of Cthulhu’s still my main love. I should also mention I’m finding Kenneth Hite’s Trail of Cthulhu brilliant, though! I’m hoping Marc Miller’s Traveller Kickstarter returns that RPG to its former glory. In all of gaming, the Traveller Imperium is my hands-down favorite.

I play a lot of Euro-style games and party games, too.

Castle Panic, Forbidden Island, and X-Wing were three games I played a lot last year. As far as miniatures gaming is concerned, it’s Flames of War, Bolt Action, Man-O-War and Warhammer Fantasy are my mainstays this year.

Of course, I still love playing Munchkin. I’ve only ever won one game of it, though. The latest Out of the Box games, like FAUXcabulary and Snake Oil, are terrific returns to form.

Speaking of Kobolds Ate My Baby!, you’re currently involved in the Kickstarter campaign for the new color edition of KAMB. What’s your favorite thing about working with kobolds? Can you give us any hints as to what Kovalicness may lurk behind the secret doors KAMB’s stretch goals?

By far and away, my favorite thing about the Kobolds is that they’re just so darned fun to draw. I was very happy with how they turned out: I don’t often get to redesign characters from the ground up. Chris and Dan, of 9th Level Games, are terrific to work with, as well.

As far as hints go, we have tremendous secret guests lined up, and some stretch goals that will take the Kobolds into 3-D deliciousness. Posibly pewter. Possibly plushie.

The first huge stretch goal – the “More Things to Kill and Eat” supplement – was unlocked after only a few days. Jim Zub (of the Skullkickers and Pathfinder comics fame) was also announced as a guest writer for another stretch-goal that was met.

There’s a hugely cool collaboration with another company we may be able to announce, soon. It’s all very exciting. There’s so much fun stuff happening, it’s breathtaking. But hard to keep track of. We were just thrilled to see the new edition fund in the first day: everything else is gravy. Incredibly, mind-blowingly cool gravy.

Other than that…everything! I’m working on four big projects that take me well away from my comfort zone. The first has already been announced and is being released in May: ROFL!, my new party game, is being published by Cryptozoic. I think it’s the best I’ve ever designed. Plus, the folks at Cryptozoic just fab. If you ever get a chance to work with them, I’d highly recommend it.

I can’t really talk about the other big projects yet, though I may have dropped a hint or two on my Twitter feed. Puppets may be involved in one of them.

Then, of course, there’s the regular stuff: the new Dork Tower trade paperback, Munchkin Pathfinder, Out of the Box new releases, a graphic redesign for a game I love from a Dutch company, and other things I’m certainly forgetting.   Hum. 2013 seems busier than it did five minutes ago…